Effort to Repeal Davis-Bacon Act Fails in House of Representatives

Bipartisan group of legislators, supported by SMACNA, join in defeating an amendment to the 2022 Appropriations bill that would have gutted federal prevailing wage laws on major federal projects and programs. 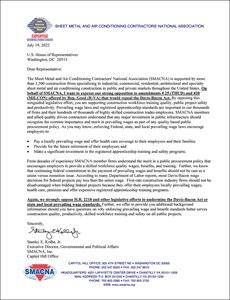 A bipartisan group of legislators defeated an amendment offered by Rep. Bob Good (R-VA) that would have repealed the Davis-Bacon Act. The Davis-Bacon Act requires that workers engaged on public works projects be paid the local prevailing wage. SMACNA believes that the Davis-Bacon ACT enables a highly skilled general construction workforce to provide maximum value to the taxpayer while encouraging a safer workplace for all employees.

In a letter to Members of Congress, SMACNA strongly opposed the Good Amendment. SMACNA and its Labor-Management coalition partners worked with legislative allies on both sides of the aisle to rally lawmakers to defeat the bill, and the Good Amendment failed 264-165. SMACNA reminded Congress that SMACNA members and allied quality-driven contractors understand that any significant investment in public infrastructure should recognize the extreme importance and merit in prevailing wages as part of any quality-based public procurement policy.

Earlier this year, SMACNA supported and provided feedback on a Department of Labor (DOL) effort to substantially revise the regulatory structure surrounding the Davis-Bacon Act. A final decision from DOL’s Wage and Hour Division regarding their attempt to reform the Act is expected soon. The long overdue update to the federal prevailing wage law administration will likely reinstitute the “30 percent rule.”

This prevailing standard was in force before damaging changes were made by the Reagan administration in the early 1980s. These revisions were very harmful to the competitive position of union contractors and skilled workers from registered apprenticeship programs. SMACNA believes that DOL’s proposed revisions should enable more union contractors can bid fairly on complex public works projects where the highest quality outcome is expected.