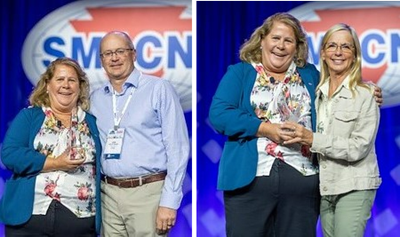 Two of SMACNA’s most visible contractors were recognized for their legislative advocacy efforts at the recently concluded SMACNA Annual Convention. Both of these individuals are known as leaders who continuously advance SMACNA's legislative agenda, but also function as outstanding advocates for the skilled trades as a whole.

John Sindyla from SMACNA Cleveland was named as the 2022 Chapter Executive Legislative Advocate of the Year. John has been a catalyst and innovative leader, developing one of SMACNA’s most politically engaged and supportive chapters, raising awareness and supporting the PAC, while also inspiring his members to advocate for SMACNA on pension reform, energy efficiency, expanding commercial, industrial, and public markets, and emerging infrastructure opportunities.

Karen Fox, President of Precision Air Balance Co. in Anaheim, CA was named as this 2022’s SMACNA Legislative Contractor of the Year. Karen has been a critical player in ongoing lobbying efforts to reform registered energy efficiency, Miller Act payment bonding reform, apprenticeship laws and regulations, pension reform, infrastructure policies, and prevailing wage enforcement legislation. Whenever asked to speak up for SMACNA. Karen has long lobbied both at the local, state and federal level on behalf of the skilled trades.