Steve Schrieffer of Atlas Blow Pipe and Sheet Metal assembles crew to feed 300 health care workers at a facility with no power. 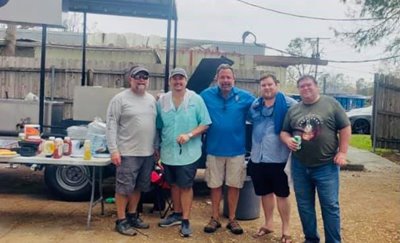 Most of us have seen news coverage of the severe hurricanes that have been moving through the country this season, but the people of New Orleans have unfortunately had a front row seat to the devastating damage left behind. This time, it was Hurricane Ida that came through on Sept. 12, 2021.

“In some areas, it was worse than Katrina,” said Steve Schrieffer of Atlas Blow Pipe and Sheet Metal Works. “It was like a bomb went off. Trees were down on top of homes, and trees were blocking roadways. It was more the wind than the water this time.”

Schrieffer also saw two 10,200 pound a/c units that had been flipped over and pushed 25 feet across a roof due to the high winds.

Thankfully, Atlas did not sustain damage during Ida, although it was submerged under 4 ½ feet of water during Katrina. “We were so fortunate through this storm, and when I looked around and knew that we were fine, I wondered what we could do to help others who hadn’t been as lucky.”

One of Atlas’ customers is a health care facility, and Schrieffer knew it had no power, so he called the facilities manager to see how he could help. “I thought maybe we would be feeding 80 people, but he said they had 300 staffers, so I called a friend that owns a catering business to see if he could help.”

The friend, Casey Fitzpatrick of Tasty Tailz, readily agreed, and the team went to work. One interesting irony is that Schrieffer had workers build a catering trailer last year during some down time, so it came in handy for this effort. In the end, they spent $1,200 and served 300 hamburgers, 300 hot dogs, 25 pounds of Jambalaya, potato salad, etc. In addition to staff, they ended up feeding construction workers and a couple of people from the neighborhood as well.

“It was 100 degrees and I’m old, and we were out there for about six hours,” Schrieffer said. “But this customer helps feed me, so I felt like the least we could do is feed them. It was a very small gesture.”