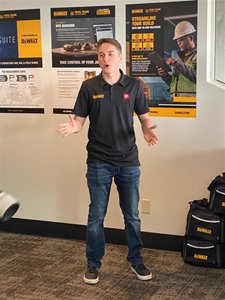 SMACNA's logo was featured on the DeWalt-sponsored Joe Gibbs Racing Team car that competed in the Toyota/Save Mart 350 held at the Sonoma Raceway in Sonoma, CA. Several SMACNA members from the Bay Area attended to lend support and watch driver Christopher Bell compete in the NASCAR Cup Series event.

The SMACNA members in attendance had an exhilarating day from start to finish. The group met up in the grandstand suites, with an excellent view of the main straightaways and pit row. At 10 AM, members were treated to a Q+A session with Bell and other guests in the DeWalt suite. The conversation with Bell touched on driving strategies with the new cars introduced during the 2022 season and some of his favorite past racing experiences.

Next, SMACNA members were treated to a tour of the garage facility. During the tour, they had the opportunity to learn more about how a NASCAR Cup team gets the car to the track every week and how the car is prepped for practice sessions, qualifying, and race day. The tour included a visit to the garage facility and the transporter rig that hauls the race cars from Joe Gibbs Racing’s headquarters in North Carolina to the various racetracks. The members also interacted with several NASCAR luminaries, including Hall of Fame driver Bill Elliott. 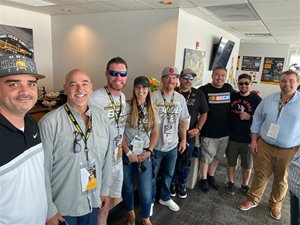 While the number 20 car didn’t have the day that many were hoping for, SMACNA members in attendance witnessed a bit of history as Daniel Suarez became the first-ever driver from Mexico to win a NASCAR Cup Race.

In talking about his experience at the track, Chris Walker from SMACNA’s California State Association said that this was “an incredible experience.” In terms of the exposure for SMACNA, Chris outlined how it was a “high-profile opportunity to improve public awareness of SMACNA and its mission.”