Energy efficiency is not just about the environment, its about smart business. This Energy Efficiency Issue covers a myriad of energy efficient projects including Pittsburgh’s groundbreaking PNC Tower – and SMACNA contractors were there to bring it to reality. 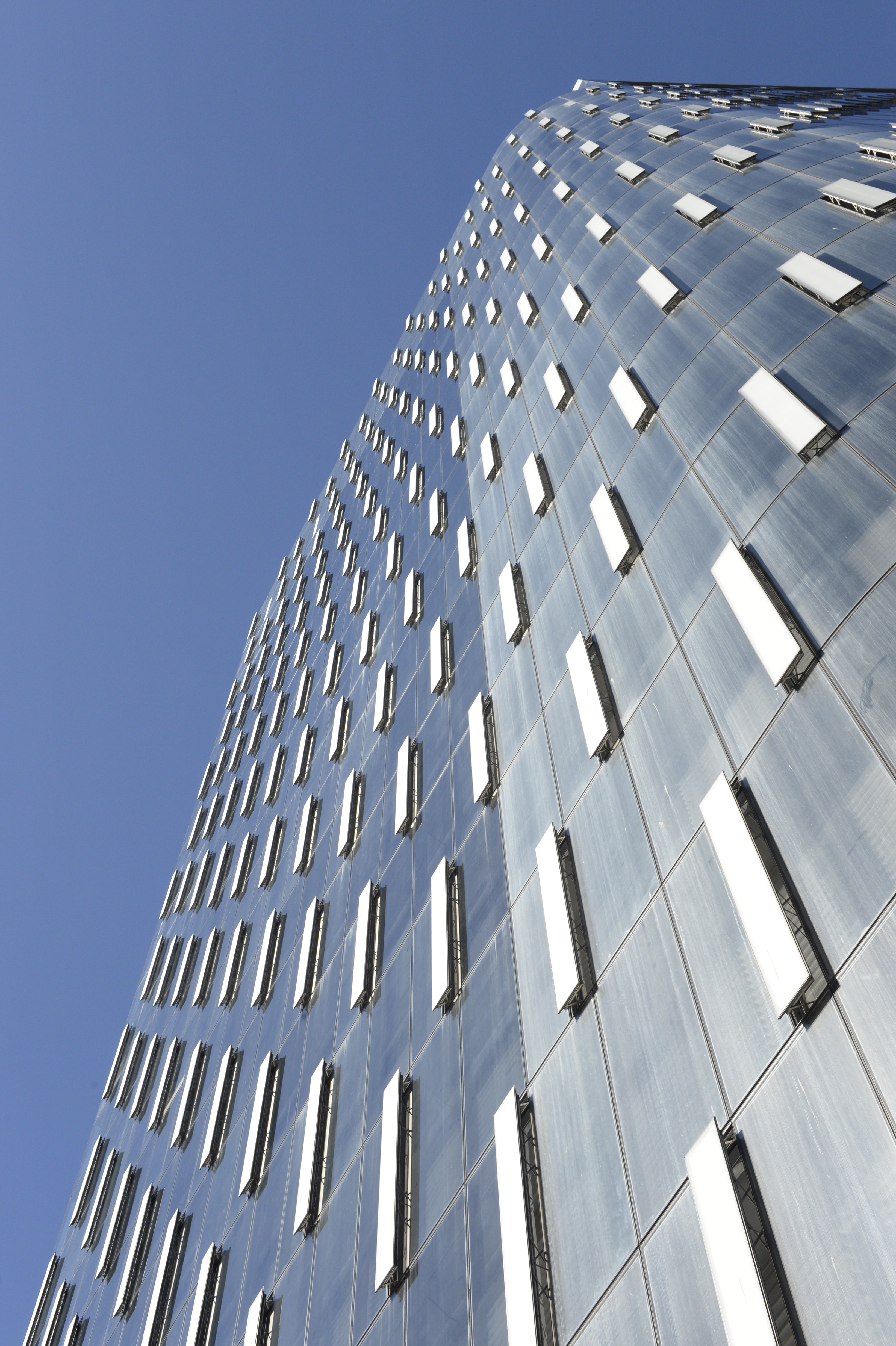 The Tower at PNC Plaza.

The 33-story world headquarters of PNC Financial Services has been described as “a building that breathes,” thanks to the unique design of the landmark office tower in Pittsburgh, Pennsylvania.

The $400 million structure uses a “double-skin facade” that allows natural airflow in a way that few modern skyscrapers can duplicate. Unlike most similarly sized structures, its highly efficient HVAC system is able to rely on natural ventilation almost half the year.

Designing something other than mechanical ventilation for an 800,000-square-foot building was a lot more complex to engineer than simply opening a few windows — and yes, the windows really do open at the Tower at PNC Plaza.

That feat, along with many others, is why PNC’s tower is considered a milestone in the uber-connected world of “smart” building design. So-called intelligent buildings like the PNC tower make extensive use of the latest in computer-controlled technologies to run everything from water to lighting and HVAC. 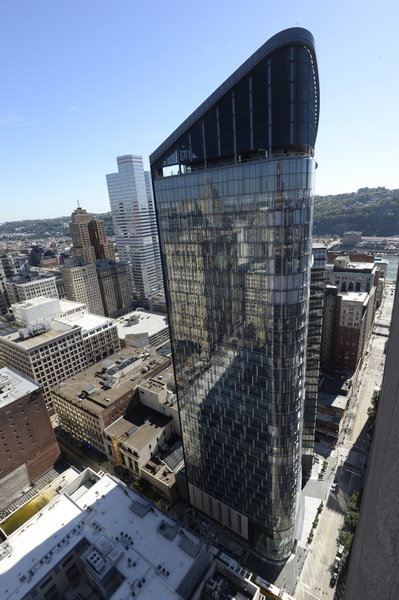 Since heating and air conditioning are typically responsible for almost half of the energy consumed by a normal commercial building, indoor climate systems are a major part of the interconnected “internet of things” and its efficiency focus.

Whether or not one is an expert in smart buildings and energy-efficient architecture, “the building is impressive,” said James Strother, executive director of SMACNA of Western Pennsylvania, who was among those invited to tour the tower while it was under construction.

“You can definitely tell it’s an exceptional building,” Strother said. “It is a pretty amazing building overall, not just from a mechanical point of view, but also aesthetically. It’s a unique design that blends both form and function.”

Many SMACNA members have already worked on such connected projects — and if others haven’t, they likely will soon. The benefits for building owners and managers are too great to ignore. Landmark smart buildings are being erected around the world, from Singapore to Amsterdam.

The goal of erecting such a structure meant that it would present a unique challenge for officials with McKamish Inc., the Pittsburgh-based SMACNA member and mechanical contractor that installed the tower’s super-efficient HVAC system. The company’s $45 million contract, divided up among three trades, included handling all the mechanical and plumbing work.

Installing HVAC equipment, fabricating and installing the building’s sheet metal ductwork was among the project’s scope for McKamish. More than 100 McKamish employees worked on the project, which required especially close coordination with other trades, over the course of 2.5 years.

“We estimate that we fabricated about 50,000 linear feet of duct in various sizes,” said Dave Wingertsahn, a construction manager at McKamish involved in the PNC project. “This included the distribution duct for the office floors, mechanical rooms, and the supply, return, exhaust and stairwell pressurization risers.”

The downtown Pittsburgh location, which necessitated just-in-time deliveries and extensive coordination with other trades, made the project’s logistics especially challenging, Wingertsahn said.

“Often equipment needed to be delivered after normal working hours,” he said. “We had to work closely with the control contractor to make sure all devices were installed where they needed to be and that they worked properly to ensure the ‘smart’ operation of the building.”

Whether you call them intelligent, smart or part of the IoT, for the facility managers responsible for keeping buildings operational, such computerized systems are revolutionary in their potential for comfort and energy savings.

Instead of manually having to turn on or even program buildings’ mechanical systems, sensors hooked up to internet-connected computers can take over such tasks. Sensors can turn on lights if a room becomes occupied or automatically lower the temperature if a space is empty for an extended period. Such systems can also adjust temperatures to compensate for outdoor weather conditions, ensuring that more air conditioning reaches the sun-soaked warmer side of a building or making occupants more comfortable on high-humidity days.

The $400 million PNC tower was so pioneering in its smart and energy-saving design, it was designated as LEED-Platinum from the U.S. Green Building Council (USGBC) in its Leadership in Energy and Environmental Design (LEED) green building rating program. It’s often called “the greenest office building in the world.”

The building’s design allows the tower’s HVAC system to be effectively net-zero in its energy use for up to 30 percent of the year. A thermal or solar chimney running through the core of the building removes excess heat without using traditional mechanical ventilation. Extending almost the whole height of the building, it's the largest such chimney in a U.S. office building, according to officials. Its top is painted black to absorb solar rays and help draw out the building’s hot air.

During cold months, the chimney helps heat the fresh outdoor air before it reaches the air handlers. Transfer wheels help add moisture and warmth to the air in the winter and remove it in the summer. The duct and piping are laid out to minimize transitions and fittings to lower pressure drop system wide, which improves efficiency.

Altogether, the Tower at PNC Plaza is estimated to consume about half the energy of a typical high-rise office building.

And many of its 2,000 occupants have access to outside air, even on the higher floors. In some parts of the structure, office workers can use walkways that allow them access to the space between the two “skins” of the building — and the fresh air it contains.

For Wingertsahn and McKamish officials — no strangers to green buildings — it made the PNC tower unique.

“I have worked on many LEED projects, but not one that uses as much natural ventilation as this project did,” Wingertsahn said.

The fact that a city once known for its steel mills and smokestacks is now home to one of cleanest and greenest buildings in the world is not lost on area residents.

“I drive by the building about every two weeks while traveling to other work sites. It makes me extremely proud, as this is a showplace of the city,” Wingertsahn said. 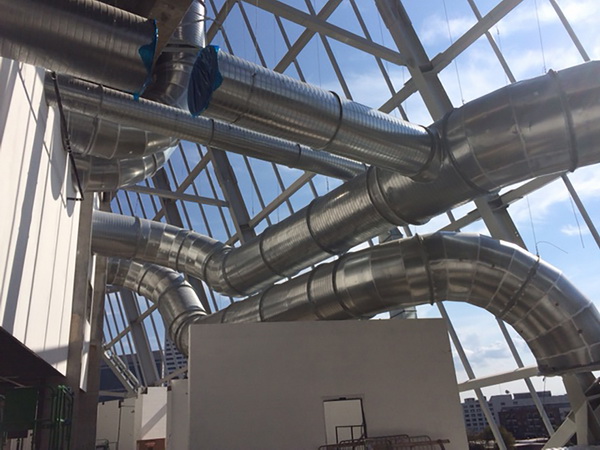 A very different kind of structure, but one just as intelligent and energy efficient, is the $1.5 billion Mercedes-Benz Stadium, home to the NFL’s Atlanta Falcons. SMACNA member R.F. Knox Co. Inc. of Smyrna, Georgia, fabricated and installed 800,000 pounds of giant-sized spiral ductwork ranging from 66 to 96 inches in diameter in the stadium.

The duct ties into a massive mechanical system that includes more than 50 air-handling units capable of moving 100,000 cubic feet of air per minute. The HVAC system uses 100 percent outdoor air. The stadium is fully zoned, with IBM computers able to factor in the conditions outside.  The computer system can also sense whether a section of the 2 million-square-foot stadium is either occupied or empty when deciding how the HVAC system should run. And it can do all of this with a retractable roof that can be open on sunny days or closed in case of rain or snow.

The USGBC awarded the stadium a LEED-Platinum certification — the first stadium to be so designated.

Maryland Casino Lauded for Being ‘Green’

In Oxon Hill, Maryland, a short drive from Washington, D.C., the MGM National Harbor has been recognized as one of the “smartest” — and greenest — casino resorts anywhere in the world.

That’s not a reference to the money that changes hands on the casino floor. The 3 million-square-foot structure has earned a gold-level certification from the U.S. Green Building Council’s (USGBC) Leadership in Energy and Environmental Design (LEED) building rating system.

The property incorporates numerous smart technologies to ensure it minimizes the resort’s environmental impact and keeps its occupants healthy and comfortable. In contrast to the old image of a relatively dark, smoke-filled gambling palace, the MGM property is bright and non-smoking and features high-efficiency water, lighting and HVAC systems. Building commissioning was used during the design and construction process and system software continuously analyzes energy performance.

The resort’s boiler system was installed by workers from SMACNA Mid-Atlantic chapter member ADJ Sheet Metal of White Plains, Maryland. ADJ was responsible for installing the casino complex’s thousands of feet of large, 34-inch-diameter exhaust flues from Schebler Chimney Systems of Iowa, as well as the breechings that connected the boiler and generator to the chimney. 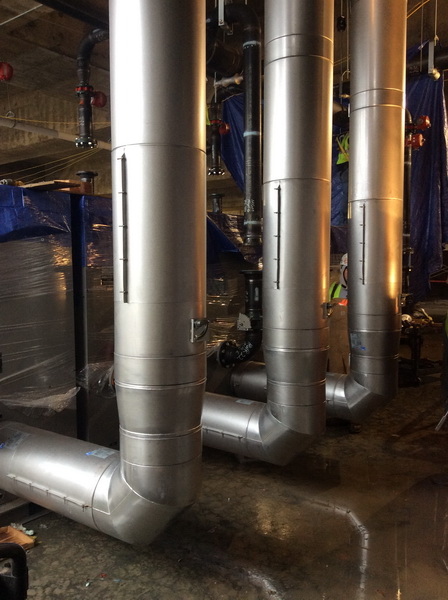 To ensure the structure met the LEED-Gold rating it was aiming for, ADJ workers also had to ensure the duct and flues that were to be connected to the boiler were kept clear of construction debris by sealing the open ends prior to installation.

The casino uses a computer program to control the boiler system’s many valves.

“There were many important valves in the system that were computer-controlled,” said Mike Doerk, the executive vice president at ADJ who was involved in the casino project.

The building also features a white roof to cut down on the urban heat island effect and reduce the load on the building’s HVAC systems. On its interior, the property employs several technologies that help improve the indoor environment, including low-VOC (volatile organic compound) paints and carpeting.

A Green Roof Springs to Life

Testing and Balancing: Making a Difference in Energy Efficiency

President’s Column: Building on the Benefits of Energy Efficiency