Construction is Booming Down Under 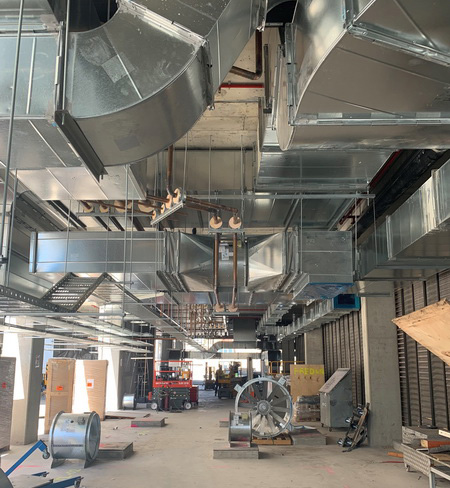 This year is already shaping up to be a busy year for Australia’s Fredon Air of Fairfield, Victoria. One of their major projects that includes HVAC system design, fabrication, and delivery is the central Acute Services Building at Westmead Hospital in Westmead, Sydney, New South Wales. The large 14-story, 1,333,000 square-foot building is scheduled to open in 2020.

The new building includes services that manage severe injury and illness, urgent medical conditions, recovery from surgery, and other critical and complex conditions. It contains two new emergency departments — one for adults and one for children — along with state-of-the-art operating theaters, in-patient beds, a helipad, and clinical support services.

“We were introduced into the project at an earlier stage than usual,” said Richard Drigo, group managing director of Fredon Air, of the contract. “This enabled us to provide a greater deal of value in engineering. We were able to optimize the design, providing significant savings as well as addressing any constructability issues, and ultimately mitigate risks for the builder and client.”

“The mechanical consultant was also engaged to provide an overview and watching brief responsible for vetting the design compiled by Fredon,” he continued. “The consultant would also model the design to check compliance with energy targets and other general project objectives.” Fredon Air has in the design phase for about 12 months and construction just started in November 2018. 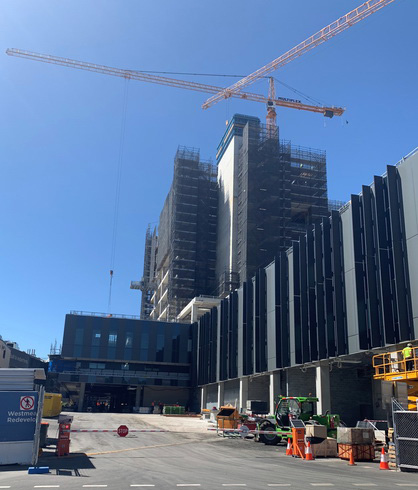 Drigo considers this project a special one. “It brings together the full design and construct expertise that the business has — with the modelling that's been undertaken in-house, with the software that's been used, with the elements of off-site fabrication, and ultimately with our shop being fully responsible for the delivery of the project.”

“It's not too far different from other jobs that we've done, but it may be different than perhaps the way that other contractors do their work,” he continued. “I guess that probably sets us apart to a certain degree, given the size of the project and the time — from consulting to delivery in 18 months.”

Drigo believes that understanding their core strengths and doing the common things uncommonly well has helped Fredon create a successful formula for delivering highly complex buildings such as hospitals.

“Firstly, you need to understand the client needs and their operational requirements for the building. You then need to fully understand the overarching design guidelines for hospitals and then incorporate the prescriptive nature of compliance relative to authority regulations and standards. You bring all these factors together and then design a system that is reliable and cost effective, a system that is coordinated and buildable within the confines of the building structure, and a system that can be maintained for the lifetime of the building. Do all these things successfully and you have a successful formula.”

Fredon has completed many projects under similar circumstances during the past few years, including Northern Beaches Hospital, the Chris O'Brien Lifehouse, St. George Hospital, and Blacktown Hospital. The time frames may seem fast to some, but Drigo says, “It’s all we know. I’m not sure whether building 1,000,000 square feet of a hospital in under two years is fast comparatively to overseas. We would love to compare notes!”

Fredon Air has full design and construct responsibility for the Acute Services Building project. They are doing IES (integrated environmental solutions) modeling and thermal simulation modeling, user group meetings and interface, and heat load/static calculations/equipment selections, along with Revit BIM design and documentation. They are also handling lead coordination supervision, delivery of the building’s full mechanical air handling plant, and delivering air conditioning and ventilation to all areas of the building.

The project will create more than 1,500 new construction jobs annually and more than 50 apprenticeships. The Fredon Air workforce, including subcontractors, is expected to peak at 200 personnel on-site, with approximately 200,000 total labor hours.

A unique aspect of the project is a commitment of five percent of the total contract amount being devoted to the Aboriginal Participation in Construction (APIC) policy. The policy was developed to support greater participation by Aboriginal people in government construction projects across New South Wales. According to Drigo, the percentage is “quite significant for a metro area, so it’s going to be challenging in meeting those targets.”

Drigo is enthusiastic about business opportunities in the area over the next couple of years. “We're very optimistic. We're going through market conditions that probably haven't been seen since the Olympics were held in Sydney.”

“We've got a government that's flush with funds, and they're on a big infrastructure spend, so there's a lot of money being spent on roads and tunnels and upgrading,” he noted. “We've also got a lot of spend in the health center, hospitals, and in universities. There are many new buildings going up within the university campuses across New South Wales as well. It's going to continue for the next year or two. It's pretty positive.”