General Sheet Metal Works was on the design team that developed the unique exterior for the Knight Cancer Research Building (KCRB) at the Oregon Health and Science University. 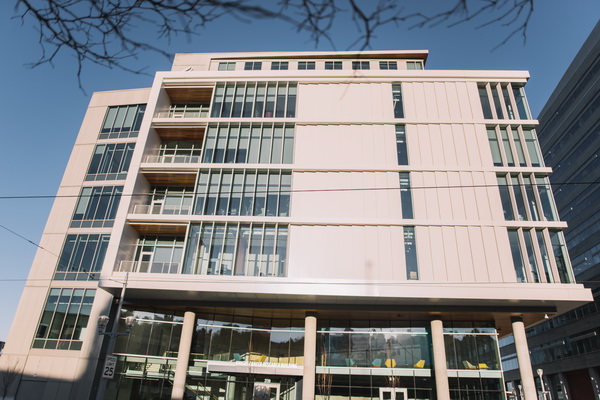 General Sheet Metal Works of Clackamas, Oregon was on the design team that developed the unique exterior for the Knight Cancer Research Building (KCRB) at the Oregon Health and Science University in Portland, Oregon.

“The designers looked at our team as a whole — the field team, the CAD people, our own designers. They were looking for experience, not necessarily a dollar amount. We 3D-modeled the whole building which let us work through most issues before they became issues,” said Mark Hermans, senior project manager for General Sheet Metal.

General Sheet Metal installed the unique exterior wall panels, each of which had multiple angles. To help with the complexity of each panel, General Sheet Metal even created a new clip-and-rail system for the project that will be used in future work.

The 320,000 square-foot-building took a year to complete. “We had boots on the ground in September 2017 and completed the project in October 2018,” Hermans said  “With an average of 16 people working at a time, our portion of the project took 28,000 hours in the field. We also did all fabrication in-house, giving us a total of 34,000 man-hours.” 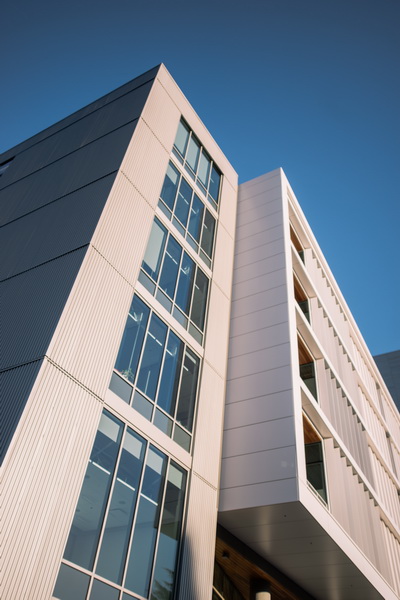 The ACM wall and sunscreens along the building’s west side.

General Sheet Metal is one of only a handful of partners qualified to fabricate and install EVO ACM (aluminum composite material) panels on the West Coast. “EVO is a solid, solid system,” Hermans said. “We fabricated about 1,300 custom, fire-resistant ACM panels — and there wasn’t a single square panel on the building. With multiple tapered angles and the angular, protruding corners, all but about 100 of those panels were unique.

Between the ACM panels and the T-16 profile panels, General Sheet Metal was responsible for 77,000 square feet of cladding,” added Hermans.

However, 3D modeling was not able to prevent all challenges. “The substrates were not always up to specifications,” Hermans explained. Errors in framing led to change orders and schedule slides. “When ACM panels aren’t perfectly straight, they look terrible. Even the color effects change if panels aren’t plumb. The KCRB project forced us to find new solutions.”

Hermans consulted with Carrie Barber, a project manager at General Sheet Metal. “We want to be the premier sheet metal installer in Portland,” Barber said. “We had to mitigate the framing issues.”

“Barber was using a clip-and-rail system on another project in Vancouver, Washington,” Hermans said. “However, because of the clip-and-rail system, framers could make mistakes there and they would not affect that project so badly. The system puts us in control of our own destiny. Clip and rail systems are also able to float over slab edges or door and window jambs.”

Together, Hermans and Barber designed a new clip that is being featured on current and future projects. “We started with 12-gage 304 stainless steel,” Hermans said. “Using our Mitsubishi 4k fiber laser, it takes 15 seconds per clip to cut out, and we are able to form 20 clips at a time using a micro tab technique. Also, stainless steel is a terrible thermal conductor, its comparable to fiberglass, which is another advantage because the clips are thermal isolators. And all fabrication is in-house, so it keeps the union workers working.”

General Sheet Metal has already put the new clip-and-rail system to use on other projects. “The contractors liked what they saw on the KCRB,” Hermans said. “They wanted us back. We are using 3D modeling again for another project which is allowing us to prefab 80 percent of the panels before we start the building. Prefabrication is the only way to stay on schedule.”

Listening to ourselves, our customers, our employees

Developing Leaders One at a Time