Despite repeated attempts, the city’s union-affiliated sheet metal contractors held firm that they should be bound as an organization. 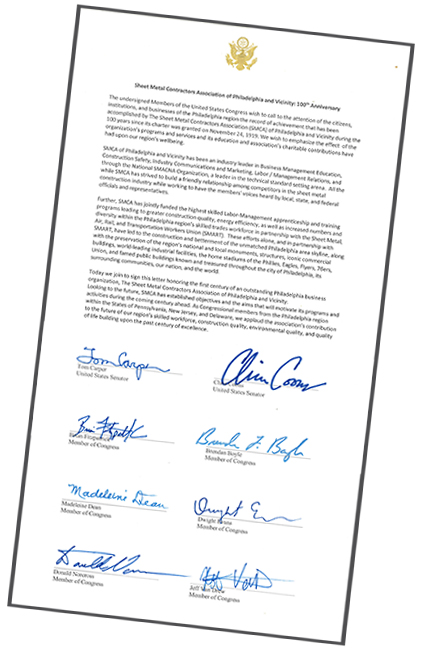 Despite repeated attempts dating back to at least September 1900 to be chartered as an official organization within the City of Philadelphia, all of which were rebuffed by the Common Pleas Court, the city’s union-affiliated sheet metal contractors held firm to their belief that they should be bound as an organization to bargain with the Sheet Metal Workers International Association union on behalf of the industry’s employing contractors.

So strong were their convictions that they began meeting as a body on June 10, 1919 — more than five months before they would finally receive their charter from the court on November 24, 1919. But with nine contractors in attendance during that first meeting, they even began drafting bylaws and named themselves the “Sheet Metal Contractors Association of Philadelphia and Vicinity.”

The six contractors who signed the application for the charter they would eventually receive recognized that cooperation among sheet metal contractors was absolutely necessary to establish order in the construction industry and promote good business practices. As such, the charter states that the association was formed to “foster, protect and promote the welfare and interests of those engaged in Roofing & Sheet Metal work by obtaining prompt and reliable information as to all matters affecting its members, by procuring uniformity, harmony and certainty in the relations existing between employers, employees and others and to further such other business which may appear to be for our welfare and interests.”

Since that time, SMCA has, time and again, done its part to sustain and even advance that lofty decree while striving to keep pace with the ever-changing ebb and flow of economic and political environments. For instance, the Association’s member contractors on April 18, 1961, signed a Declaration of Trust that set up its Industry Advancement Programs, which involved a more-intense focus on education, research and experimentation to “formulate high quality standards of sheet metal and roofing construction.” That Declaration and the Association’s charter demonstrate SMCA’s continuity of purpose, which is to improve the roofing and sheet metal industry to the best of its contractors’ collective ability.

As such, the Association itself has embraced many internal changes, including amalgamation with the Roofing Contractors’ Association and the Slate Roofing Contractors’ Association on April 15, 1940, that re-established the organization as the Roofing and Sheet Metal Contractors Association of Philadelphia and Vicinity — which it would remain titled until 1990, when it reverted back to simply the Sheet Metal Contractors Association. Along the way, by the 1950s, SMCA began to embrace a more social and educational mission, with contractor members supporting improved labor-management relations and financing training programs for employees in order to keep them up-to-date with modern technology … vital pursuits that remain today.

Meanwhile, the Association’s member contractors have helped build many of the city’s most iconic and endearing structures, including the old Veteran Stadium, the current U.S. Mint facility in 1969 and countless structures for the region’s many universities.

Today, SMCA has grown beyond bargaining to include a wealth of education, training and business-management resources. Importantly, the Association’s companies are more committed than ever before to construction safety and effective labor relations, all of which are fostered by the top-level services that SMCA continues to provide, as it has for a century.

SMACNA 2019: Getting Down to Business in Austin

Highlights of the 2019 SMACNA Annual Convention

Need for Humidifiers and Air Purifiers Heats Up in Winter