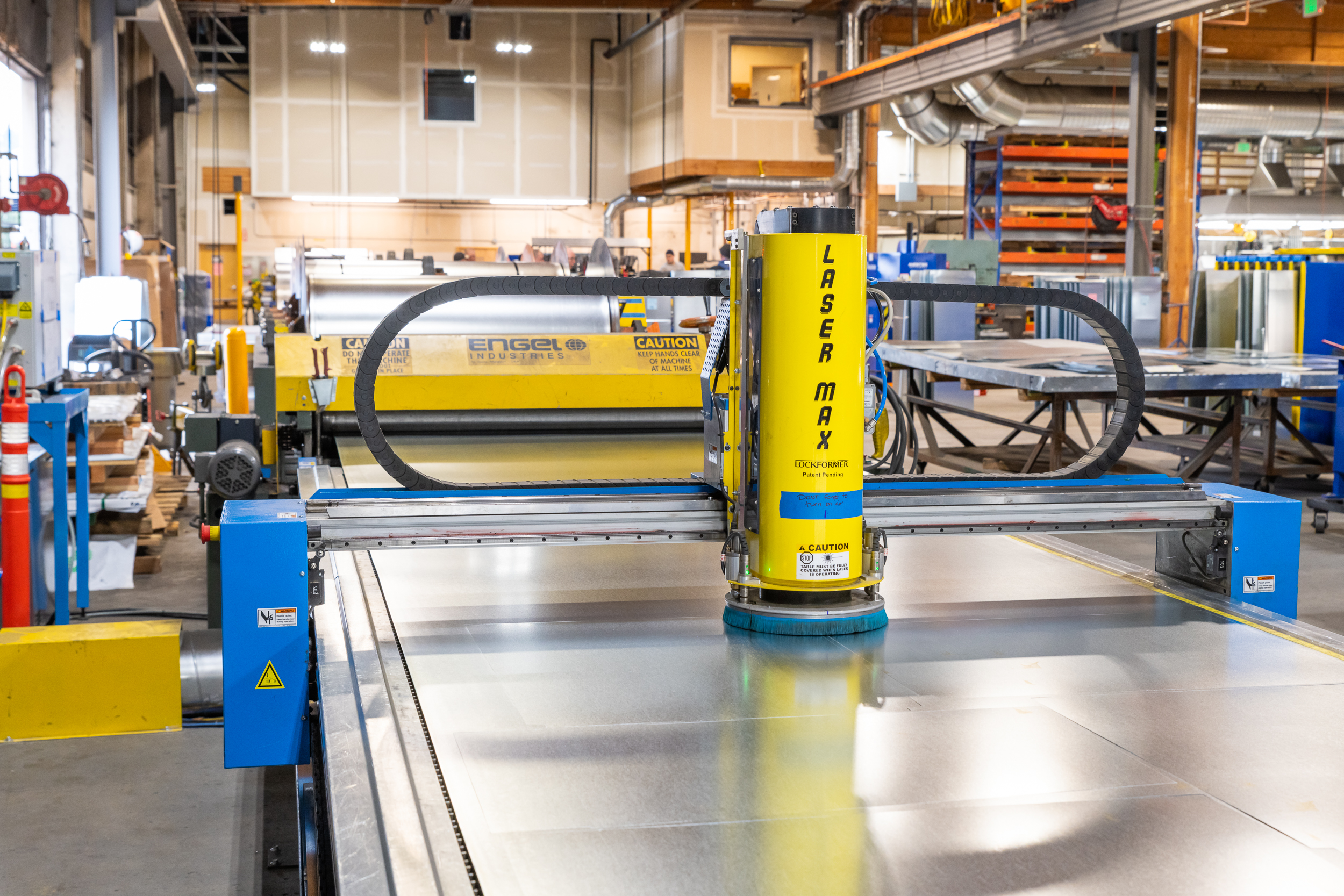 On the Cutting Edge

Laser cutting equipment is steadily making its way into the sheet metal shops of SMACNA members—especially those whose businesses extend beyond HVAC ductwork into other types of specialty fabrication.

The lasers light show you may have seen at rock concerts are boring compared to what’s taking place today in the sheet metal industry. These days, industrial lasers are being used to cut all types of metal in new and intricate ways at record-setting paces, and it’s happening all across the country. 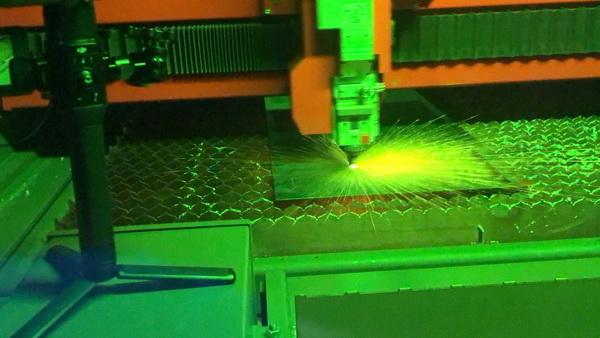 Laser cutting equipment is steadily making its way into the sheet metal shops of SMACNA members—especially those whose businesses extend beyond HVAC ductwork into other types of specialty fabrication. At companies where the client list encompasses industrial and agricultural businesses and even large-scale beer brewing operations, laser cutting machinery is almost mandatory, some contractors say.

Nothing compares when it comes to the speed and accuracy of laser machines, they add. Even the most expensive plasma cutters cannot match the laser for efficiency or the clean cut it produces.

Ask George Gallant. The president and owner of Lor-Don Ltd., a 58-year-old industrial contracting company in London, Ontario, has purchased three laser machines over the last 16 years. The company currently has two: one is a 12-year-old, 4-kilowatt carbon dioxide (CO2) laser machine, and the newest is a 10-kilowatt fiber laser unit. The manufacturers were Mitsubishi and Bystronic. They can cut 16-gauge stainless steel anywhere from 160 inches per minute (IPM) on the older machine, to an eye-popping 2,350 IPM on the latest model.

A Fairly Recent Development
The CO2 laser was invented by Bell Labs in 1964 and has long been used in construction. The more powerful fiber laser, which has been available for about 30 years, has only come into common use in the last decade. 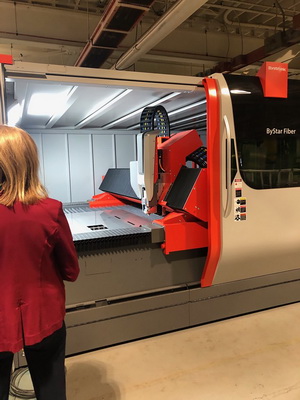 They’re essential to Lor-Don’s success, Gallant said, adding that they can even run when nobody is in the shop, since the sheets are automatically fed and cut.

“We could not do what we’re doing today without those pieces of equipment,” he said. “If you’re going to be in this (industry) fabricating the product, you’re going to have a laser or you just can’t afford to do the work.”

In Clackamas, Ore., officials with General Sheet Metal (GSM) decided to purchase a laser cutting machine after comparing the direct and indirect costs of outsourcing such work to vendors versus performing it in-house. The company estimated direct costs at close to half a million dollars.

General Sheet Metal decided on a Mitsubishi 4020 RX-F40, a 4,000-watt fiber laser capable of cutting up to 1-inch-thick milled steel, half-inch steel and aluminum, and copper, brass and bronze up to 3/8th-inch.

General Sheet Metal, which specializes in mechanical, architectural and HVAC fabrication, uses the laser for cutting HVAC fittings out of stainless and thicker milled steel.

A Need for Speed
Going to a fiber laser from a plasma table, the speed difference when cutting fittings was noticeable immediately, Knudsen said. GSM’s plasma table typically cuts material at a rate of around 350 inches per minute (IPM). The Mitsubishi laser could do the same amount, four times as fast: 1,400 IPM. 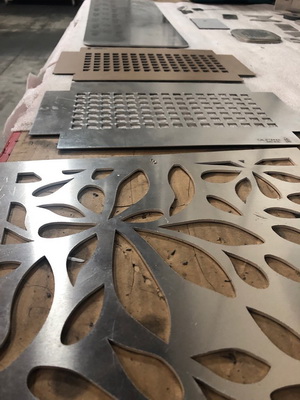 Based on numbers like that and what it means to time savings and costs, Knudsen said purchasing the machine was unquestionably the right decision.
“We all had concerns on the cost of this machine, but we are on track to beat the projected ROI (return on investment) of six years, and my goal is to reach it in four years,” he said.

Bill Marrinan isn’t surprised by those types of comments. Marrinan is a vice president and owner at Gladwin Machinery & Supply, a Schaumburg, Ill.-based seller of fabrication equipment with customers and offices throughout the Midwest. The main brand of laser cutting equipment that he represents is from Mazak Optonics Corp.

“If we’re talking 16 gauge and lighter, which is ductwork—galvanized ductwork—you’re probably going to be 10 times faster, which is a lot when you talk about savings or increasing capacity,” Marrinan said. “It’s huge. It’s mind-boggling.”

A Revolutionary Change
He compares the technology used in the newest laser machines to the evolution from the gasoline-powered internal combustion engine to the plug-in, fully electrified vehicles from automakers such as Tesla. They represent the future.

“Most of the fiber lasers that are being sold today are being sold to people who already had laser (machines),” he said. “They want to get away from all the maintenance of the old machines. They want the speed. There’s a huge flight to this new fiber technology” whether it is to save money or increase capacity and add more customers.

Partly because of the expense and the fact that many HVAC projects don’t require the clean edge cut that lasers provide, most sheet metal shops are more likely to have a plasma cutter, Marrinan said.

But there are a few laser machines aimed directly at the HVAC market, Marrinan pointed out. One is the Vulcan Laser-Max 1.5 from Mestek Machinery. The fiber laser cutter dispenses with the bulky enclosure most laser machines require. Instead, just the laser cutting head is enclosed, and the whole machine doesn’t take up much more space than the 20-foot plasma table sheet metal contractors are already familiar with.

Like its larger laser cousins, it cuts fast and clean—in about a third of the time that a traditional plasma cutter takes—and without the smoke, powder and jagged edges common with plasma.

Taking It to the Max
Among those who have purchased the Laser-Max for their shops are Tom Nolan of Hermanson Co. in Kent, Wash.

In the case of Hermanson, the laser machine was part of a $3M upgrade to the sheet metal and pipefitting shop at the full-service HVAC construction contractor. (The overhaul was featured in the September/October 2019 issue of SMACNews.)

“We had seen promotional videos of the Laser-Max HVAC   application machine and had toured shops around the country using the machine in order to collect their opinions and experiences,” said Tom Nolan, the contractor’s fabrication general superintendent. “That data collection convinced us that the laser should be part of our investment. We have found that the laser does cut much faster and the quality compared to a traditional plasma cutter is much cleaner. The laser simply makes for a better product.”
Hermanson uses the Laser-Max to cut 24-gauge to 16-gauge galvanized metal, along with 16-gauge stainless steel for welded duct systems.

“It really excels on the lighter-gauge material,” Nolan said.

Initially, Hermanson ran its existing plasma table alongside the Laser-Max. But once the staff became familiar with its operation, the plasma was retired from service. 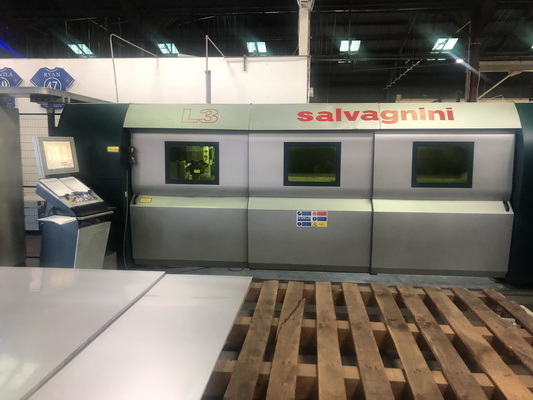 A laser machine can be a wise investment for a contractor, especially considering it can cut up to 10 times more in the same amount of time as older machinery and methods — and without the mess or dross.

Before buying the machine, a single piece of 10-foot-long metal coping would take about 15 minutes to notch, shear, and punch. “With a laser, that whole process complete takes about five minutes and (requires) less handling,” Isom said. “We have seen tremendous time improvements on jobs that involve large quantities because we call it ‘lights out’ fabrication. With the automated loading, we can turn the lights out at night, go home and a stack of processed material is sitting on a pallet ready for forming the next morning.” 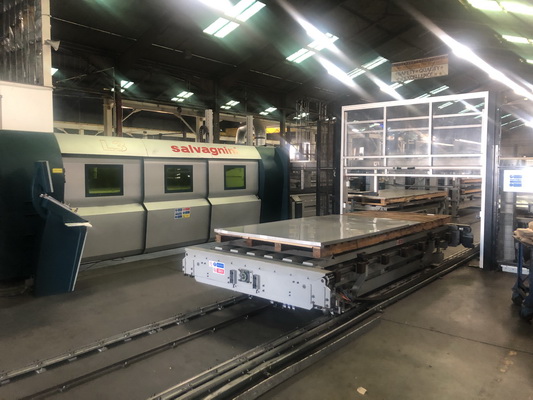 Mike Hilgert, president of Superior Duct Fabrication in Pomona, Calif., said it’s the automated capabilities of laser machines that have really impressed him.

“A lot of the machines are the same,” he said. “They’ll do the cutting. “It’s the automation that moves the material around that’s the important part. And I believe that the company we went with, which is Salvagnini, has the best automation.”

Like the Bystronic, the Salvagnini machine can pull, cut and process material without the need for someone to operate the machine.

“I mean, if we were to leave it alone for a weekend, it can cut up to 250,000 pounds,” he said. “This is significant progress in technology, which is extremely helpful for a company like ours.”

Mobilizing for the Future: Shop Technology

Preparation Is Half the Work

The Importance of Identifying Risks and Developing a Strategy