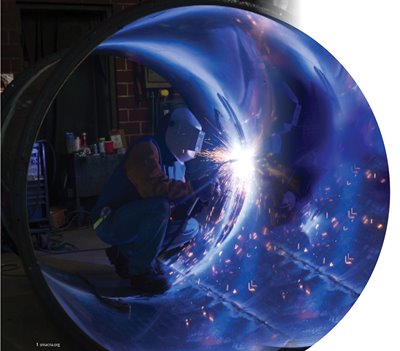 Welding inside a hot rolled steel dust collection duct for a soybean plant.

Many contractors engaged to make “food grade” ductwork for food processing plants typically have lots of questions and few answers when it comes to figuring out exactly what clients are asking for: Are they following U.S. Food and Drug Administration or U.S. Department of Agriculture guidelines? Does the plant want to use stainless or hot-rolled steel? What type of finish do they want on the metal?

Bringing some clarity and standards to the subject of food grade ductwork fabrication and installation was the goal behind the “Food Grade Ductwork and Sheet Metal Guidelines,” recently published by SMACNA. Almost four years in development, it explains the different types of materials used in food processing facilities’ HVAC systems, what to consider when choosing them, and design best practices.

Golay was one of seven SMACNA members who assisted in drafting the guidelines. Roeland Hoeke of mechanical contracting firm H.T. Lyons Inc. in Allentown, Pa., was task force chair.

‘A hodgepodge’
Prior to the guidelines’ release, sheet metal advice for projects in the $750 billion food processing industry was typically cobbled together from existing SMACNA manuals, standards and papers that touched on the subject, Golay said. Publications from groups such as ACGIH, (American Conference of Governmental Industrial Hygienists), were also referenced. 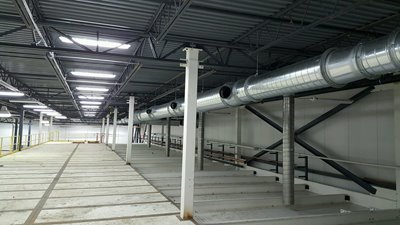 Here you can see the dust collection ductwork for the corn seed plant in an interstitial space.

“There’s been kind of a hodgepodge,” he acknowledged.

Spread over 11 chapters, the guidelines lay out common scenarios that sheet metal contractors, as well as engineers and system designers, are likely to encounter as they work on food grade duct projects.
Hoeke said the task force’s goal was to pool their collective industry knowledge and create a publication that would benefit the whole industry, with a special focus on assisting engineers who may find themselves working on food industry duct projects. 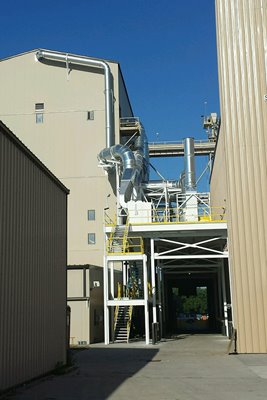 This shows the dust collection duct for a corn seed plant.

Aimed at contractors, engineering community
“We wanted to be able to take some of that knowledge and put it together in one spot. And that way we’d get a good reference publication not only for the members of SMACNA and sheet metal contractors, but also for the design and engineering community,” Hoeke said. “It didn’t seem like anything existed that covered all of what sheet metal contractors do within food and beverage plants.”

Hoeke’s company doesn’t have as many food industry clients as some sheet metal contractors based in the Midwest, or other task force members. But Hoeke, H.T. Lyons’ president, pointed out that many consumers have likely tasted items made in factories that are on its project list: marshmallow candies, jelly beans, chocolates, bread, pastries, soda, milk, iced tea and even beer.

But even if he hasn’t worked in the meat processing and prepared foods factories of the Heartland, Hoeke said that he’s always had a deep interest in the production process, which is why he really enjoyed learning more about the food processing industry as the task force drafted the guidelines.

Lack of standards
Being based in West Des Moines, Iowa, Golay’s company does a lot of duct fabrication and installation work in the corn and soybean processing facilities that dot the Midwest, which is why he was tapped by SMACNA for the food grade ductwork task force.

The lack of standardization in the food processing industry can make projects more difficult than they need to be, Golay said. 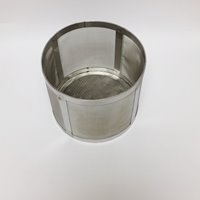 This is a custom basket strainer for a food plant.

“We’ve done work for the same company in two cities that are 30 miles apart and they have completely different standards, which is ridiculous,” he said.

However, Golay pointed out that the guidelines aren’t attempting to be prescriptive. They still leave engineers and contractors with options to figure out what works best for the client and the facility. But hopefully, it will improve communication between both parties by helping contractors determine the right questions to ask and prompting engineers to provide clear answers.

“It basically says when we go through all the contents of the guidelines, ‘Here are some suggestions, but this is what we need from the engineer and the people at the plant who decide how this really works,’” Golay said. “So they can’t just say ‘food grade.’ They have to say, ‘No, no, no, we want stainless steel. We want hot-rolled steel. We want it fully welded.’”

Having that kind of information earlier in the planning and even the construction process can make for a better experience for everyone, Golay added. 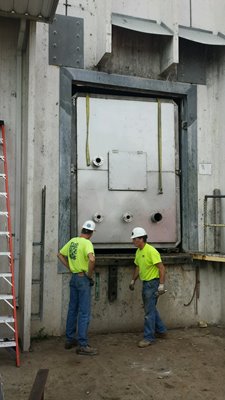 The size of this stainless sludge tank for a slaughter plant was determined by the door opening.

Hoeke agreed. Having these guidelines would have been helpful for some of H.T. Lyons’ projects, he said. “In many past cases, we were not the engineer of record,” he said. “If we thought something didn’t look quite right, we could have pointed the engineer to this document.”

A common example, cited by Hoeke and Golay, is threaded rod, which is often used to hang ductwork and piping. Because it’s fully threaded, dust and debris can attach to the threads that stick out. Solid, unthreaded rod is usually a better choice in food manufacturing facilities, but not every engineer knows that.
“We can use this guideline to say, ‘Hey, I think you should be upgrading to something like this,’” Hoeke said.

Some parts especially useful
Working on the guidelines for so long, both Hoeke and Golay said they have parts that they’re especially proud of and believe will be the biggest benefit to the industry. For Golay, it’s the model specifications in chapters that cover items such as process exhaust, sanitary tubing and pneumatic conveying, and ductwork engineering and design.

Having specifications assembled together makes it much easier to ensure everyone knows what they’re doing, he said. “So the customer knows what they’re getting and we know what the customer wants,” Golay said.
Hoeke said he found several chapters to be extremely helpful for anyone wanting to get a better understanding of the intricacies of food grade ductwork.

“If I were to give this book to somebody and say, ‘Read this. Then you’ll know what we’re talking about,’ I would start with chapters four and five (“Food Grade Ductwork and Sheet Metal Applications” and “Duct and Sheet Metal Materials”). And then secondarily, chapter six (“Engineering and Design — HVAC Ductwork Serving Food and Beverage Production Process/Sanitary Areas”). … I think that four, five and six in the middle, that’s the meat of it.” Hoeke said.

And Hoeke said he’s proud of the guidelines and what the task force has accomplished in putting them together. “I believe that SMACNA, along with other U.S.-based engineering associations and building code groups, have set the standard for the world as far as building construction and facility construction quality.”

How Leaders Can Build Enduring Resilience

RESIDENTIAL: Google Ads are a Great Way for Contractors to Gain New Business