Posting projects to online channels can be a great way to promote your work. Of course, it’s not often that a duct project garners a half-million views. However, a recent project by Sheet Metal Werks, a full-service fabricator in Arlington Heights, Illinois, was no ordinary ductwork job. The pure copper spiral duct and fittings designed and built for IT Gym, has attracted a lot of attention, and put the spotlight on the company. 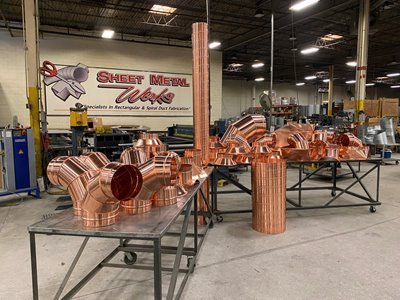 Kevin Ryan, the president of Sheet Metal Werks, which primarily works in the commercial sector, said that he never would have imagined the project would be so popular when he posted it on LinkedIn. It’s already lead to new opportunities in Texas and Florida — and possibly more coming down the pipeline.

It all began when one of his contractors let Ryan know his wife was opening a gym in the revitalized Bell Works Building, a mixed-use space with restaurants, offices and more. They wanted something one-of-a-kind for the exposed ductwork.

“He asked if we could do the project in copper — and my first response was, ‘That won’t be cheap,’” Ryan recalled. “But they wanted the unique look.”

There’s no question it was the right choice for the space as it catches the eye of everyone who passes by, even from outside. Ryan said it “shines like a diamond through the window” — and it gives an incredibly sophisticated look to the gym. 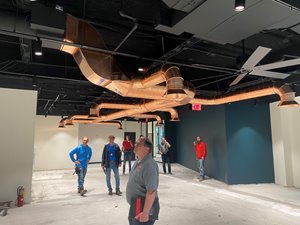 A Smooth Process
While he never could have guessed this project would be quite so popular, Ryan said he did suspect it would get at least some interest. He had good forethought to ask his crew in the round department of his shop if there were any major problems — or any reason they wouldn’t want more work like this. They said the entire process was smooth from start to finish.

In fact, Ryan said that as far as the logistics, the biggest challenge was obtaining the material — 1,100 pounds of 20-ounce copper, which took about a month. He wasn’t sure if that was a supply chain issue or simply because it was a special order. But, after that, the actual fabrication of the design was easier in many ways than an aluminum job, thanks to the workability of the material. The fabrication took about 60 hours in labor.

And everything else about the job went exactly as it would with any other metal. The same was true for the installation — there were no added challenges other than having to work with cotton gloves to protect the material. 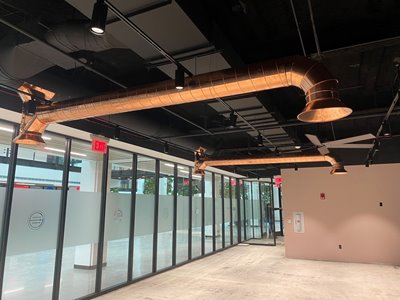 Of course, one unique aspect of copper is that it will patina over time. This oxidation process, which is what gave the Statue of Liberty her famous green color, occurs as the copper is exposed to oxygen. Because the project is indoors, the process might take longer.

“I’m not sure if they’ll let it patina over time or if they’ll coat it to protect it,” Ryan said. “That’s a bridge I think they’ll cross later.”

Ryan said this was the first all-copper duct work job in his 35 years of business, but he now knows it won’t be the last. He is continuing to get ongoing interest since posting the photos on LinkedIn.

“It has such a unique aesthetic look that it really does transform the space,” Ryan said. “We are always looking for ways to separate ourselves. Sheet metal has been around for a very long time, and you can buy it from anyone. But we are not afraid of change and trying new things. This has been a great example of our willingness to try something outside of the box, and it worked out for everyone.”