A pipeline of transit projects is fueling large-scale opportunities for contractors who can prepare and plan for the complex work. 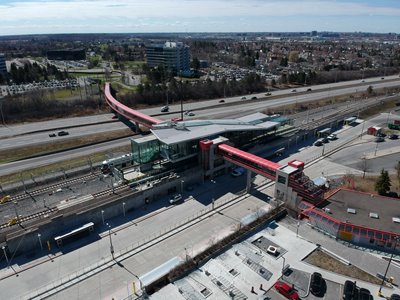 Infrastructure dollars and emissions awareness are a couple of factors driving an influx of transit projects across the country, with more than three times as many slated for completion in 2022 compared to last year. From light rails to streetcars, subways, rapid transits and ongoing airport work, lately it’s a rush-hour of work in demand. This creates opportunities for sheet metal design, fabrication and commercial HVAC ductwork.

“There is government funding, DOT spending, and the airport here is continuously doing work,” said Jack Knox, president, RF Knox Co., Smyrna, Georgia. “Those dollars are funneling down to the states, and there is tremendous opportunity for folks to get involved if they choose to.”

But it’s not for everybody.
“The schedules are challenging, the work is challenging,” Knox added.
And there are complex logistics involved in transit work that must be accounted for when bidding. Knox estimates losing 25- to 30-percent productivity during an eight-hour shift. “You might get five-and-a-half to six hours of productive time, so if you estimate it like a ‘normal job,’ you will get your clock cleaned,” he said. Moving materials into transit spaces and working on a site that is fully operational and must be cleaned and ready for the public daily cuts into actual revenue-producing labor hours.

But the challenges are exactly what Knox and his team love about transit projects. The work represents about 15 to 20 percent of the company’s revenue, given a five-year $40-million project for the Metropolitan Atlanta Rapid Transit Authority (MARTA) and HVAC systems at Atlanta Hartsfield International Airport.

“It’s having the knowledge of how to do these projects, and our company has been in business for 108 years, so if it’s made out of metal, we say we can do it,” Knox quipped. “We are not afraid to tackle any sort of project.”

Stationed for Growth
A growing population in the Ottawa, Canada, region is driving transportation spending to explore alternatives to buses that leak emissions, said Danny Dillon, president, Dilfo Mechanical. “Our infrastructure was primarily public transit by bus, and there were not enough buses to move people in and out of the downtown core,” he said. “So, that was a catalyst for the city and province to look at other means of transportation.” 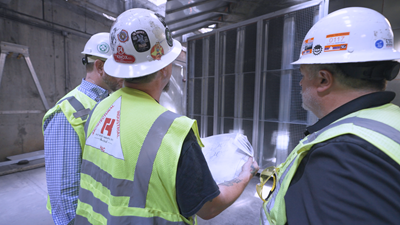 The city has grown to more than 1 million in population, which makes Ottawa a “little big city,” Dillon related. Several years ago, an extensive light rail project launched based on a P3 model: public, private, partnership. “So, large construction companies and financed companies bid on the work by RFP, and they build it and maintain it and lease it back to the city for a period of time, like 25 to 30 years, because these projects cost a ton of money,” Dillon explained.

Phase one started four years ago and was completed last year, and now the project is in phase two that will likely take until 2027. Dillon said Dilfo Mechanical got involved “by chance.” A consulting and engineering firm recommended the company to the consortium that was focused on digging the tunnel. “We were invited to bid on what they call the temporary ventilation systems for the tunnels, so as they dug, the people working in them had the proper temperature and ventilation,” he said. “We were successful at winning the work for those temporary vent systems.”

“There are roughly 3 kilometers of underground tunnels that had to be drilled out for the new light rail,” he says. 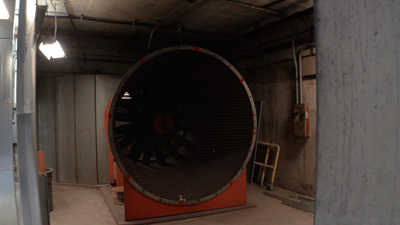 He calls the project “massive” and there are about 20 of his staff of 200 employees on the site at any given time. “They are small stations, but they are all electrified so there are a lot of data-center type controls and electrical rooms that need specialized cooling, and that is part of the work we do,” Dillon said. “The stations have split heat pump systems that can provide heating and cooling year-round.”

The light rail system that runs east-west through Ottawa is part of an overall infrastructure that includes The Trillium Line, running north-south with 11 stations.
Winning the bid for the Confederate Line called for a varied staff of professionals. “What allows us to be successful is that we do in-house ventilation and ductwork, and we have refrigeration technicians on staff. A lot of this work involved refrigeration to connect the heat pump systems, along with plumbing and drainage so water can run to where it needs to go, as well,” Dillon said.

Essential for earning the work was CAD 3-D modeling.

During the first phase, it was not a prerequisite, but we did it anyway,” Dillon says. “But with the phase we are doing now, part of the package is designing it all in 3-D and updating that model on a weekly basis to show what has been constructed so everyone has visibility on everything that has been built.”

Navigating the Work
The time required to design and model everything in 3-D was more than expected, Dillon said. “That part was challenging, as well as planning the work,” he added.

“The P3 construction models can be challenging to navigate because essentially the city is given very tight timelines for builders to construct these light rail transit systems and stations. And what happens along the way is they are building before they complete the design of the whole system, so we build, design, build, design,” he explained. “It was somewhat difficult to start and stop because it was such a rush to get it into design at first, and then get it built as well. There was a lot of back and forth.” 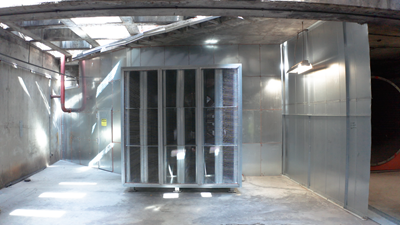 To overcome this, Dillon said his team had to plan carefully to organize different trades and stay as efficient as possible. “We followed Lean practices to make sure everyone was on site at the right time to do the work so they did not delay any other trades,” he said. “Otherwise, it’s a domino effect. If I don’t get my work done, then you can’t start yours.”
For the MARTA project, RF Knox Co. had to retrofit components, including sound attenuators and fan valving for nine stations. “Most stations had at least two fans with tunnel exhaust, and these fans are massive,” Knox said, estimating the attenuators at 10-by-10 feet square and 8 feet long, and the fans are of equal size.

“You have to lower them down a shaft, so there is a lot of rigging involved, and we had to move the equipment around on the MARTA tracks,” he said. “It’s quite a logistical challenge.”

Each station required about eight to 10 technicians and the phase work is largely performed at night or on weekends when the train stations are not as busy.

RF Knox Co.’s work at the airport involved similar logistical circumstances that require constant communication. There, the company fabricated and installed 100 percent of HVAC, air handling units, dampers, diffusers and anything involved with the system for the newest F concourse. “The job can be shut down at any time if a flight is coming in late,” Knox pointed out. “The end date won’t change, but we just have to operate differently if we have those delays.” 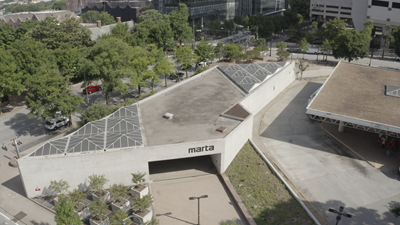 He added, “You’re working in a space that is fully operational and has to be 100-percent clean when you leave because folks will be walking in that space trying to catch a plane the same day.”

Orchestrating schedules meant an ongoing flow of emails and texts among owners, general contractors and trades to make sure everyone was on the same page. “If you have verbal communication you want to make sure you back it up with something written,” Knox added. Communications at RF Knox were largely filtered through project managers, foremen and project coordinators.

Knox said the company assured MARTA it would “stand behind its number” from a budgeting perspective. “We believe in quality, and we do not hammer our general contractors for change orders, unless it’s an owner-driven change,” he said. “We take ownership over our work, and I believe people recognize that and see the results.”

Importantly, certifications are essential for earning these projects, Knox added. pointing out that these designations are a critical “in” for winning an RFP. For example, the MARTA project required partnering with a contractor with Minority-Owned Business or Woman-Owned Business certification. Department of Transportation accrediting was also necessary.

Knox enlisted Mills Specialty Metals, which is DOT-accredited and a Woman-Owned Business. “That was very important for us, so we did not have to bring in a third party to get certifications,” he said.

A Busy Pipeline
Communities like Ottawa are already experiencing the benefits of these large-scale transit projects. Dillon said, “Just the pollution from running city busses up and down the street all the time — with light rail, it’s clean energy so there is no diesel or fuel fumes as you walk downtown,” he said. “On the main streets when busses were running at peak hours, all you could smell was the fumes, and that’s a thing of the past now. And there are definitely fewer busses downtown compared to four or five years ago.” 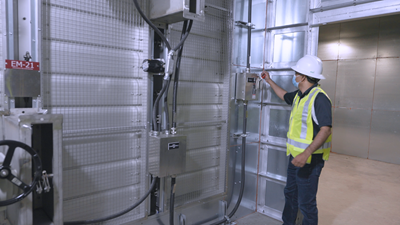 Is there more transit work in the pipeline?

Dillon said Ottawa will expand its light rail, and other major metropolitan areas are doing the same, such as Toronto. “There are cities throughout Canada that are on the same band wagon of building light rail,” he noted.

This is the case across the country and world. According to a Construction Dive brief about 2022 transit, New York City has its East Side Access project to relieve congestion at Penn Station with a new station at Grand Central Terminal in Manhattan. Honolulu, Hawaii, invested in an elevated rail transit line, and the report also noted projects like the 11.4-mile extension of Washington D.C.’s Silver Line of the Metropolitan Area Transit Authority (Metro) to Dulles Airport. Other projects include light rail in Los Angeles and Boston, along with San Francisco’s Central Subway.

Senior Research Associate at the Urban Institute, Yonah Freemark, wrote: “But the change has really been that cities are taking the idea of bus priority more seriously.”

“In the last 20 years, it has been a strong niche for us,” he said, echoing the “tremendous opportunity.”

Beyond the big-ticket scale and investment in these projects, there’s pride in being involved in efforts that alter the way we move around cities. Dillon said, “It’s exciting to be a part of something historic in the city.”