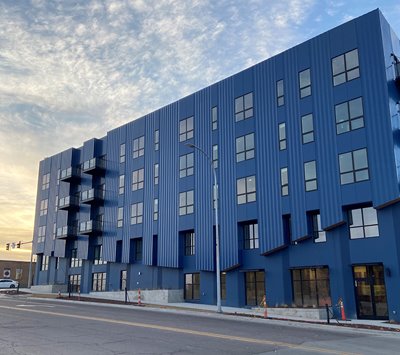 When Interstate Mechanical Corporation (IMC) was able to offer some fabrication options that would save a general contractor time and money, it was a persuasive selling point on a large building project in their headquarters hometown. That — along with a previously built relationship — helped the Sioux City, Iowa-based company land the job.

Urbane1220 in downtown Sioux City was planned as a 5-story mixed-use building. Now complete, it boasts 56 residential units, approximately 3,000 square feet of commercial space and a parking garage. IMC was invited to bid on this project after having previously worked with the general contractor on an unrelated project.

“We had developed a relationship with Estes Construction (General Contractor) on a past project, so they interviewed us,” recalled James Olson, president of IMC. “Our office is just two blocks from the jobsite, which was definitely a comfort to them. They liked that we were local and could provide that local element of support as their project team was from out of the area.”

While all of these factors were important, IMC's ability to save significant dollars (and time) on planned panels by taking the fabrication in-house was the most appealing. The design plan involved sourcing product from outside of the region.

“We found out the project was over budget, and we provided some options in which we could fabricate the panels right in our own facility,” Olson says. “We could keep everything local and save them time and coordination. This also saved a lot of money. Slingshot Architecture was open to learning more about what we could provide, so we built a mock-up wall to show them.” 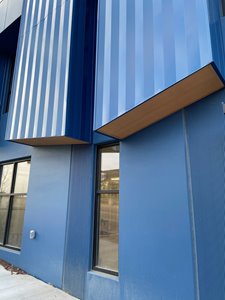 The fabrication of the aluminum dry reveal honeycomb panels began about six months leading up to the start of the jobsite. Photos: Interstate Mechanical Corporation

“By using our panels as product substitutions, it offered cost savings and positively impacted the schedule,” Olson said. “I think having already gained trust from the other project gave us the foot in the door that allowed us to really listen to their wants and needs and offer viable solutions.”

Olson said that there’s nothing more important than really being able to understand what the client needs — and crafting the right solution.
“In this case, we were able to create panels that provided the right aesthetic look, as well as the functionality and performance that they were seeking with this exterior façade,” Olson continued.

As far as challenges, Olson said that the procurement of materials due to supply chain issues had to be on their radar. But this was an issue they’d dealt with on other projects since the pandemic. The other challenge was the location. The jobsite was very close to a bridge overpass, so there had to be a lot of precision with staging materials.

“We had to use some swinging stage scaffolding that cantilevered off of the building in order to safely handle and stage our materials during installation,” Olson said. “That is not a process we have to use often, so it just required some extra care and out-of-the-box thinking.”
The fabrication of the panels began about six months leading up to the start of the jobsite. Installation began in August 2021 and was finished at the start of the new year. The building opened in March 2022.

As a local project — just around the corner from their office — this project brought a lot of pride. IMC has served Siouxland and its surrounding area for more than 100 years since the company’s inception with Olson’s grandfather. What started as an architectural sheet metal contracting company has grown into full-service mechanical contracting and metal fabrication.

The company’s project radius is approximately 100 miles, but Olson said that they strive to build ongoing relationships with customers, which has taken them even further when the right project presents itself.

No matter the project, Olson said the goal is the same: to form a partnership and help provide custom solutions that fit the client’s needs. In the case of this project, that goal has certainly been met.