Apollo Mechanical tackles a project for one of the world’s largest manufacturers in the semiconductor industry. 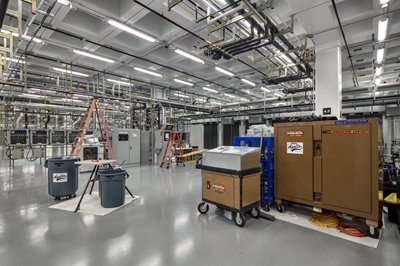 Installing massive ductwork comes with its own set of challenges. The crew had to disassemble it for transport and then reassemble it on site. Photos: Apollo Mechanical Contractors

From the outside, the site of Apollo Mechanical Contractors' recent project in Oregon appears to be a simple box. “It’s basically a big warehouse that looks like a Home Depot,” said Richard Cooper, project manager for Apollo Mechanical Contractors. But inside, it’s the newest campus for a top supplier to one of the world’s largest manufacturers in the semiconductor industry.

Apollo’s client recently consolidated several outlying locations into a single 280,000-square-foot facility for demonstrating and selling tools to their customers. “In the microprocessor world, a tool is a device used for dry etching and wet etching computer chips,” Cooper explained. The client needed office space, labs, and a warehouse. Apollo’s client also needed classrooms, because they provide education and support to their customers even after selling the tools. In the center of the building, they have an enclosed second story with 24,000 square feet of space as a cleanroom for training their customers' workforces to use the etching tools.

Cleanrooms allow Apollo’s client the tight air quality control its employees need to fabricate semiconductors. A typical office space might have a half million to one million particles floating in each cubic foot of air, but a single speck of dust can destroy the microscopic connections inside a chip. Semiconductors are also sensitive to temperature fluctuations, humidity, noise, or other vibrations. At this campus, one cleanroom allows 10,000 particles per cubic foot of air, and an even cleaner section allows only 1,000 particles per cubic foot. 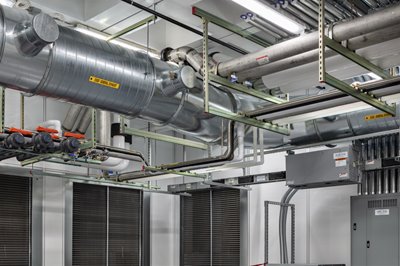 Particulate contamination is only one of the problems Apollo had to help solve for the client. Outgassing is a constant byproduct of the etching process, so they had to remove dangerous fumes from the workspace while protecting the outside environment. The system shunts hazardous gases to vaping units and venturi exhausts, where the gases are burned off and scrubbed. Then the process exhaust system forces the remaining gaseous waste into the atmosphere through a specialized Teflon-coated stainless-steel duct. Apollo installed 21 exhaust fans and six fume exhaust fans with an effective plume height of 45 feet to raise the scrubbed fumes to a safe level.

To meet the client’s strict IAQ and pollution control requirements, Apollo installed 130,000 pounds of galvanized ductwork and 15,000 pounds of stainless-steel duct, with the largest duct topping out at 122 inches by 48 inches. The massive ductwork presented logistical challenges. “Some duct is so big that we couldn't ship it fully assembled,” Cooper said. The shop dissembled it for transport, and his team reassembled it on-site before raising the duct 35 feet in the air to its final location under the trusses.

Apollo has a small shop near the job site in Oregon, plus a crew of about 100 in their main shop in Kennewick, Washington. They fabricated most of the duct in-house, but they bought the custom Teflon-coated stainless-steel duct from an out-of-state supplier. The system also required 12 rooftop units from 4,000 to 30,000 CFM each, a 22,000 CFM makeup air unit, and 66 terminal units. 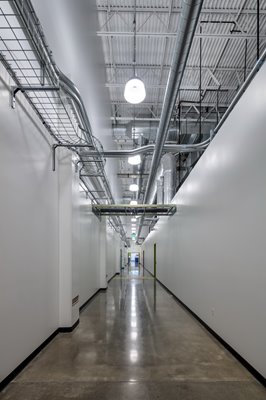 Apollo did the BIM for the whole job during April through July of 2021, but the pandemic forced delays. Procurement was the biggest difficulty. “Just trying to get enough stock for the fab shops was a challenge. We had to call around and find somebody who matched us,” Cooper said. Hardware was even further behind. “We had everything scheduled to deliver in October of 2021, but equipment that was supposed to be here in the third and fourth quarter of 2021 didn't arrive until 2022.”

Apollo reorganized their process to compensate for delays. “We wanted to run pipe to our pumps, but there were no pumps to pipe to.” To keep on schedule, Apollo installed the systems ‘backwards,’ positioning the duct and pipe before the fans and pumps were available. Apollo relied on their detailers and left strategic outs for field adjustments once the final equipment arrived. “Our installation started in October of 2021 and finished in June of 2022,” Cooper said. “Our biggest crew size was about 15 sheet metal installers at a time.”

Apollo has many years of experience working for the semiconductor industry and this client. Cooper credits the general contractor with creating a working relationship that stays strong during difficult times. “It’s one of those deals where you're comfortable. People are honest, and when we have problems, there's no issue. We have that type of relationship with this contractor. We always keep the best interest of the client in mind with quality and safety. I think the client appreciates that, and it works.”