As the labor crisis looms, companies focus on building a new generation of industry leaders. 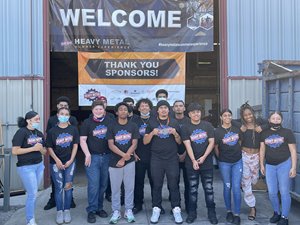 The shifting demographics raise important questions about the future of work and the labor force in the United States. The construction industry, which represents roughly 4% of the national gross domestic product is no exception. More than 40% of workers in the sector today are expected to retire within 10 years, according to the National Center for Construction Education & Research.

“We need to get going on bringing some new, fresh ideas and fresh blood into our industry,” says Rick Hermanson, CEO of mechanical contractor Hermanson LP, based in Washington state. 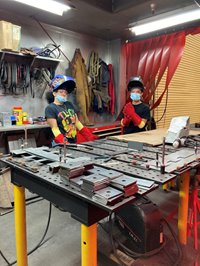 Where some may see a looming labor crisis, executives like Hermanson are focusing on building a new generation of industry leaders. In seeking out creative approaches to attracting new talent into the sheet metal and air conditioning sector, they’re finding that construction summer camps for high school students offer a promising strategy for recruiting younger workers.

Heavy Metal
Hermanson and Angie Simon, president of Northern California-based Western Allied Mechanical, teamed up to launch a pilot program for construction camps last year. Their idea was born during their participation on a workforce development panel at a SMACNA convention.

“What resonated with me is letting career-minded kids know there's another option out there if they choose not to go to college,” Hermanson recalls.

Heavy Metal provided students between the ages of 15 and 19 with opportunities to see trades such as sheet metal, piping and plumbing up close in a hands-on setting. Simon and Hermanson point out that changes to the standard educational curriculum have made the need for such camps particularly acute. Specifically, the disappearance of trade-type training in high schools means fewer teenagers get exposure to the possibilities of careers in construction and contracting. 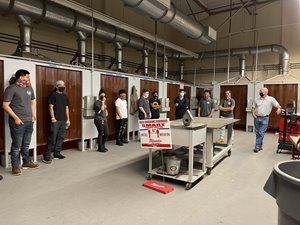 Heavy Metal seeks to fill that gap for students who might be interested in a career in construction contracting. Hermanson and Simon focused their recruiting efforts for the camps on underserved communities in hopes of attracting a diverse group of students seeking alternatives to enrolling in higher education.

“Our goal was to give high school students the experience of working with their hands to see if they liked it,” Hermanson says. “To me, it was about making kids aware of this industry.”
Simon says Western Allied is now helping eligible campers from the 2021 program find career opportunities in construction. Some have enrolled in classes at community colleges or vocational schools as precursors to apprenticeships. 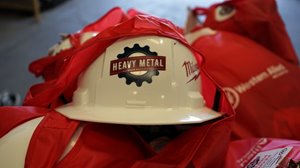 “We tell the campers that when they reach 18 and graduate from high school, they can contact us to help them work through the process of finding a job,” Simon says.

Providing New Experiences
The pilot camps consisted of six-week schedules. Participants attended two classes each week for two-and-a-half hours, during which they learned the fundamental skills involved in the construction trades. The curriculum included demonstrations from workers in the different trades and construction projects. The campers also went on field trips to job sites. 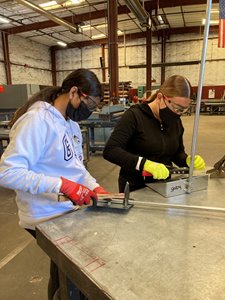 The California camp was attended by 16 local high school students, while the Washington camp had 12 attendees. Hermanson says there was no shortage of people in the industry offering to help: “I was blown away by how many people volunteered to be a part of the classes and tell their stories to these kids about their experience in the building trades.”

In terms of operating the camps, Simon says she came up with an initial estimated budget of $30,000 for the pilot. She quickly found partners willing to help with funding and in-kind donations for the program. For example, Milwaukee Tool donated personal protective equipment such as vests and gloves for use during the instruction sessions and tool bags for the students to receive upon completion of the camp. Another of Western Allied’s vendors provided boots for the campers valued at a total of about $3,000.

Instructors from the piping and sheet metal trades provided instruction for the teaching sessions, with the labor unions covering those costs. The local SMACNA chapter also donated funds to the effort. 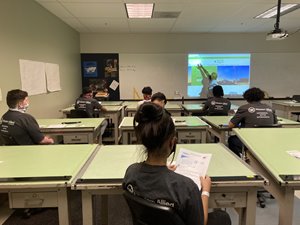 In the end, Simon says Western Allied spent roughly half of its estimated budget on the program, with its primary expense coming from materials. Looking ahead, companies are already offering donations to help set up similar camps in 2022, according to Simon.

Branching Out
The plan now is to take Heavy Metal national. Simon and Hermanson have already taken the first step of incorporating to form a nonprofit that can run the program full-time.

Additionally, Hermanson and Simon have developed a “playbook” to help other groups replicate the program. The document includes background on the logistics and objectives of the Heavy Metal program, such as the benefits of cultivating partnerships with local youth organizations and finding qualified instructors. Hermanson LP and Western Allied disclosed information on costs and labor associated with running the camps in the playbook. It also features suggested schedules and curriculum for groups to use when running their own camps, as well as analysis of lessons learned during the pilot last year. The playbook even contains sample marketing collateral that sponsors can use to promote the camps. 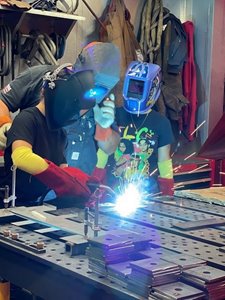 “Our goal was to make it easy for contractors to do this in their own communities,” Hermanson says. According to Simon, as many as 12 groups around the country have reached out to them about implementing their own Heavy Metal camps this year in places like Atlanta, St. Louis and Los Angeles. 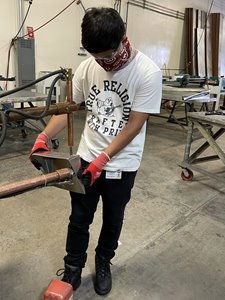 Simon says the greatest challenge to developing successful camps will come from finding solid partners to recruit students to the camps. Simon worked with a local non-profit organization, Live in Peace, to identify candidates for the camp. Live in Peace offers mentoring for students in the Bay Area who are considered by their high schools to be at-risk of dropping out. The organization screened candidates for the program on behalf of Western Allied, and a Live in Peace representative attended every session to help with any situations that might arise with the campers. Hermanson focused his recruiting efforts on working with the local school district. He says he plans to branch out to nonprofit organizations this year. Other suggested partners in the playbook include trade schools and community colleges.

Simon says other organizations in the Bay Area have expressed interest in helping steer students to the Heavy Metal camp this summer. That gives her confidence camp sponsors in other regions around the country can find partner organizations to help with their recruiting efforts.

Of course, Hermanson says he hopes attendees of the camps will help do the recruiting on behalf of the sponsors. “On the very first day of camp last year, I told the kids, ‘It's your job to go back to school and tell all your friends what a great industry this is.’”

Anatomy of an HMSE Playbook

SMACNA – WW, Western Allied, Hermanson Company, and Construction for Change have partnered on a pilot program that introduces sheet metal and piping/plumbing trades as a career option to high-school-aged students. It's called the Heavy Metal Summer Experience (HMSE). 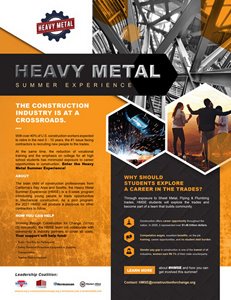 The Playbook goes over exactly what contractors need to run a similar summer program themselves. Here’s a sneak peek of what’s inside.

It starts with an overview of the construction industry's hiring challenges and opportunities, setting the stage for why this program is important for all contractors to embrace to amplify their hiring practices and overcome workforce challenges.

Then it dives into the logistics. This starts with who a construction business can target as potential candidates for the program and how to build school partnerships. It also provides recommendations for children-to-teacher ratios, as well as your employees’ teaching responsibilities and tips and a suggested timeline.
The curriculum section outlines a planned schedule for each day's itinerary, including a list of materials to give the students, such as safety vests and gloves, safety glasses, hard hats and boots.

Each section of the curriculum highlights the goal, processes and procedures, time to complete and required materials.

To market the Heavy Metal Summer Experience, contractors can follow the Marketing and Partnerships chapter to see what strategies worked best for marketing the programs and where to target these materials.

The Playbook also provides an application you can use for the students to fill out so you can gather contact data and assess their applicable skillsets and interests.

Take a look at the Playbook’s contents for more insight:

To request a copy of the Heavy Metal Summer Experience Playbook, visit www.hmse.org.