A dramatic curved stainless steel façade gave the A. Zahner Co. of Kansas City, Missouri, another opportunity to further expand its geographic reach to the Harim Tower in Gangnam, Seoul, South Korea. 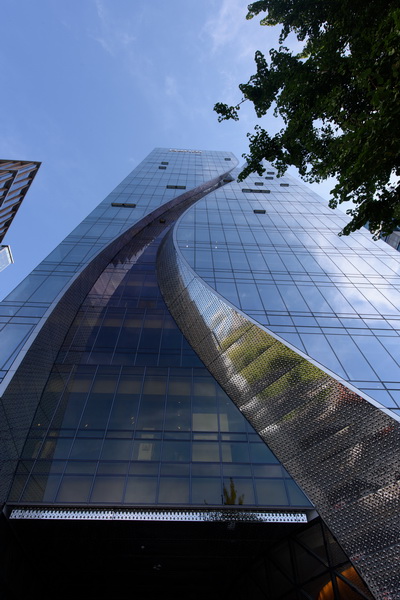 A dramatic curved stainless steel façade gave the A. Zahner Co. of Kansas City, Missouri, another opportunity to further expand its geographic reach to the Harim Tower in Gangnam, Seoul, South Korea.

For the exterior, Zahner developed a custom feature to produce an “S” shaped recess in the façade that rises 17 stories high, then studded the perforated metal in the recess with sparkling lights. Zahner engineered the exterior cladding system and custom perforated the stainless steel throughout the interior and exterior.

Designed by the Beck Group, the 86,000 square-foot mid-rise office tower is the corporate headquarters of the Harim Group, a South Korean livestock and feed manufacturer. The building includes a boardroom, high-end restaurants, a café, and office spaces.

Zahner developed their customized ZEPPS-patented system to create unique forms and curvatures in metal that were used in this project. Zahner provided a deep recess cavity for the exterior lighting system. Working with Well-Light, a Korean lighting design company, Zahner’s team installed more than 10,000 energy efficient LED lights that show through the exterior’s millions of perforations to sparkle like stars in the night sky.

The contractor’s role was multifaceted, said Tom Zahner, PMP, Zahner’s chief operations officer. “We completed a design assist with a Korean partner as our primary liaison. The process took several months and involved several design iterations,” he said. “We fabricated all  the mirror-polish stainless steel cladding at the entrance and an architectural (“S”-shaped) feature that went up from the entrance all the way to the roof, over the roof, and down the other side.” Zahner described the final product as “a complex array of holes and bumps.” 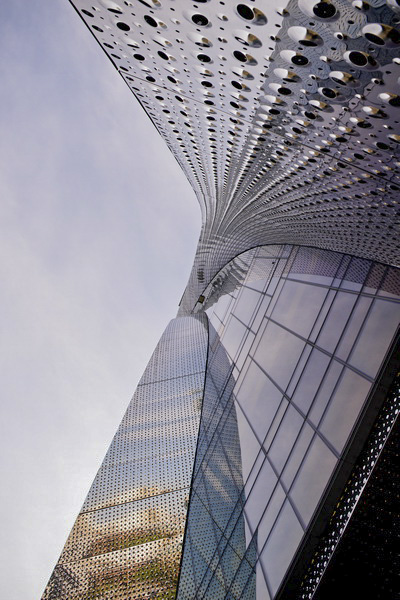 A. Zahner manufactured the stainless steel cladding at its Kansas City facility using structural framing elements and a protective PVC coating and shipped it overseas in containers. “The challenge was in developing crating for odd-shaped cladding units that could withstand the trip overseas and be easy for the installers to handle,” he said.

Although international shipping costs were about twice as much as sending a product somewhere in the U.S., the cost was “not unreasonable” considering the distances involved. “The need to crate and protect the product properly for a long trip on open oceans was the biggest difference,” Zahner said.

Zahner prepared an extensive installation set of drawings and engineered the connections, then their Korean partners in Seoul did the actual installation. The installer visited A. Zahner’s facility several times to learn the process and Zahner sent a project liaison to the job site in South Korea several times as well to check on progress and identify any issues with the installation.

“We had to create extensive installation directives and virtually walk through how the material would be taken from the crate, hoisted, and installed,” Zahner said. “There was a fairly rigid requirement for directions for the installation, and several penetrations by other trades had to be navigated and took the most effort. We had several teleconferences to coordinate these issues.”

Fortunately, one of A. Zahner’s marketing and sales directors had experience working in South Korea and that helped with navigating barriers in the language, travel, cultural, and technical aspects. Travel required quite a bit of advanced planning, he said, but the company’s established personnel routines reduced any impact on the project and overall daily activities.

“South Korean builders put great value on the emotional and psychological impact of the architectural feature, which is apparent at the earliest stages of design, while American builders tend to emphasize pragmatics early on — how to get something built, shipped, installed, etcetera,” Zahner said. “We had to be aware of this, and were able to come up with a respectful way to keep form and function as equally important decision criteria in all stages of the project.”

“South Korea is a very progressive and architecturally advanced country,” Zahner said. “The architectural marketplace is also very competitive over there.”