When SMACNA’s San Diego chapter was founded 70 years ago, Harry S. Truman was president, NATO had just been established, and playwright Arthur Miller won a Pulitzer prize for “Death of a Salesman.”

And when the Sheet Metal Contractors Association (SMCA) of Philadelphia and Vicinity was established in 1919, the Eiffel Tower was the tallest structure in the world, Prohibition was going national, and women would gain the right to vote a year later. SMACNA National would be incorporated 30 years later.

As SMACNA celebrates its 75th anniversary as a national organization, it’s taking a look back at the beginnings of some of its long-standing chapters.

Members would be hard-pressed to find many, if any, chapters with a longer history than SMCA of Philadelphia and Vicinity. Fortunately for Executive Director Bill Reardon, the group kept pretty good notes from the start. 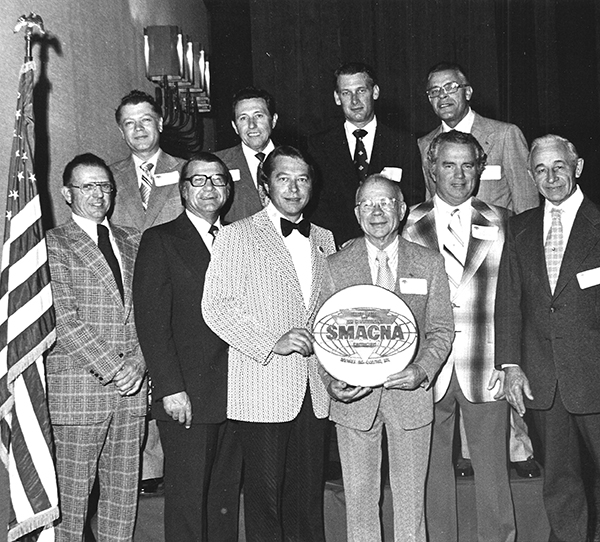 SMACNA of San Diego representatives at a SMACNA National Legislative Conference in the late 1970s.

“The charter has been framed and mounted on the association wall for 100 years,” Reardon said. The 1919 charter lists 10 names, which Reardon believes represents individuals. One of those names is the founder of the Wm. J. Donovan Co., which, after 106 years, is still in business today and has been an SMCA member for 100 years.

Many of the early SMACNA chapters were focused on collective bargaining with the Sheet Metal Workers International Association (SMWIA), which had been around since 1888.

“In construction, it’s critical to have multiemployer bargaining,” Reardon explained, which necessitated establishing an organization to bargain on employers’ behalf.

The records in the association’s archives cover wars declared and undeclared, and times when the federal government dictated wages and much of the country’s manufacturing and construction industries were converted to wartime production, as during two world wars.

“The association rode the highs and lows of the national economy and world politics,” Reardon added. “Contractors took part in the war efforts. Many were involved in the Philadelphia Naval Shipyard, where Liberty battleships were constructed at a record pace during World War II.” 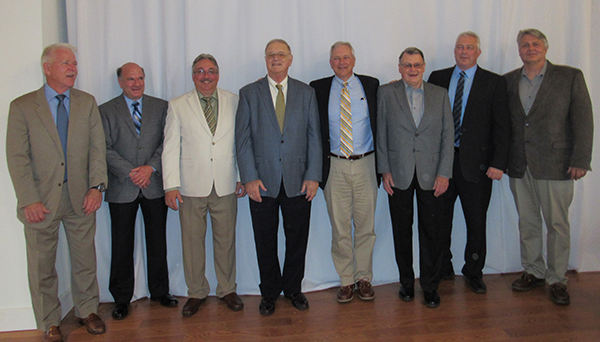 Past presidents of SMCA of Philadelphia and Vicinity were recognized at the chapter’s annual meeting in 2018.

By the 1950s, the chapter began to have more of a social and educational mission, with meetings covering how to run an effective contracting company. Today, SMCA of Philadelphia and Vicinity has grown beyond bargaining to include a wealth of education, training and business management resources.

SMCA of Philadelphia remains one of SMACNA’s most active chapters, with 32 member companies. “These companies are committed to construction safety, effective labor relations and they expect top-level services,” Reardon said.

“We have been able to build a pretty tight-knit group because they see each other constantly,” Reardon said, adding that SMCA covers a relatively small region where a lot of very sophisticated construction is required. “They battle each other. So, it’s only natural for them to work together through the association and accomplish common goals.”

More than 2,500 miles away in San Diego, California, Linda Baxter-Jennings said the origins of her chapter, SMACNA of San Diego, are a little less clear. But like Reardon, she said it appears it started as an informal group of contractors working together to negotiate contracts with Local 206.

Back in those days, the Southern California city’s construction industry was heavily unionized, said Baxter-Jennings, the chapter’s executive vice president.

“Anybody who was anybody was a member of the association,” she said. “There was no nonunion labor.”

Like In Philadelphia, Baxter-Jennings’ research uncovered wage issues between the union and the SMACNA chapter that were a result of federal price controls during the Korean war, as well as financial problems that the group was able to overcome.

There are a lot of items in the archives that she still has to go through, and the chapter is working on digitizing its collection of meeting records, books, newspaper clippings and photos.

SMACNA of San Diego has historically had good relations with its union, seeing only one strike in its 70 years, in 1974.

Today, members are busy with work in sectors such as biochemicals, waterfront projects, and bidding on renovating the stadium used by the San Diego Chargers.