Installing a double-duct system at a community college is challenging enough, but add an unusual distributed hot deck to it and you have both a challenging and rewarding project for Western Allied Mechanical. 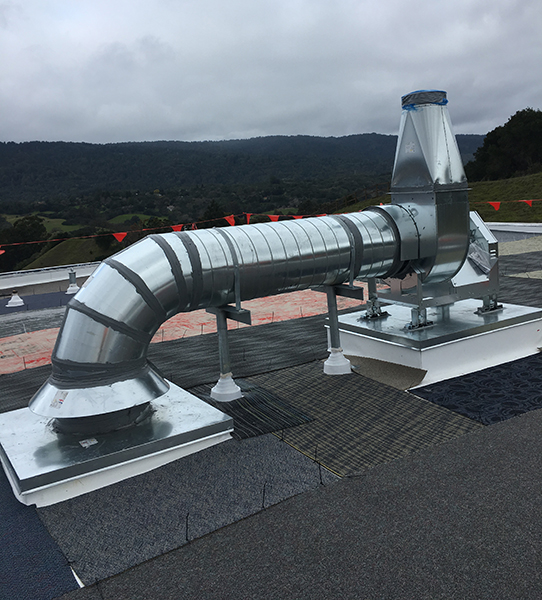 A lab exhaust fan with duct on the rooftop.

Installing a double-duct system at a community college in Redwood City, California is challenging enough, but add an unusual distributed hot deck to it and you have both a challenging and rewarding project for Western Allied Mechanical, Menlo Park, California.

The Cañada College’s new B23 Science and Technology Building is a 50,000-square-foot, three-story building with classrooms and teaching labs for the college’s science, mathematics, and technology programs.

“A double duct system is a fairly typical design that includes two side-by-side units — a cold air deck and a hot air deck — but is often difficult to fit into a ceiling,” said Laurens (Loek) Vaneveld, PE, LEED-AP, chief engineer and designer of the system.

“We took the hot deck and broke it apart into five smaller fan coils per floor, which we installed on three floors (instead of one larger air handling unit). That meant we could make the hot deck air handling systems smaller and leave them in the ceilings, so it didn’t need a separate mechanical room, and the main heating supply ducts could be smaller.” It also eliminated the need for heating duct risers in the building, he noted.

While this approach might not have been essential to the building, Western Allied Mechanical proposed it as a cost-effective solution. “With a typical variable air volume (VAV) reheat system, you’re always heating cold supply air; with a double duct system, you eliminate most or all of the reheating process and wasted energy,” Vaneveld said. 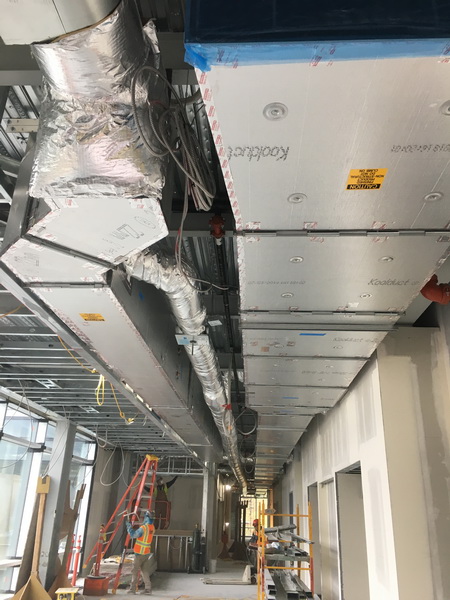 Another unusual aspect of the project is that the system is designed with higher heat supply air temperature (SAT) levels — a high-maximum SAT at 130 degrees Fahrenheit — so it can deliver smaller volumes at higher temperatures and mix warm air with cold deck air as well as use smaller heating ducts and VAV terminals. A more-conventional dual duct variable-air-volume (DDVAV) system would use a 95-degree hot deck SAT, he explained.

“It’s ventilation-driven for the cold air,” said Vaneveld. “This approach came from a project we implemented at the University of California-San Francisco where we came up with the high SAT concept to make our hot deck AHU fit into a small space. It was about one-third the size” of a standard AHU.

The work is “all roughed in and we’re approaching the home stretch,” Vaneveld said of project progress. “The physical work is done and we’re almost at a standstill until the ceilings are in. We just fired up the fan coils to dry out mud and plaster faster (caused during dry wall installation).”

The project has involved four to five sheet metal workers up to this point and one worker currently for testing. “We expect to finish up this summer,” Vaneveld said. “We’ll have people there for finishing at this point, putting in diffusers, and testing.”

Cañada College’s B23 Science and Technology Building is scheduled to open in December 2019.