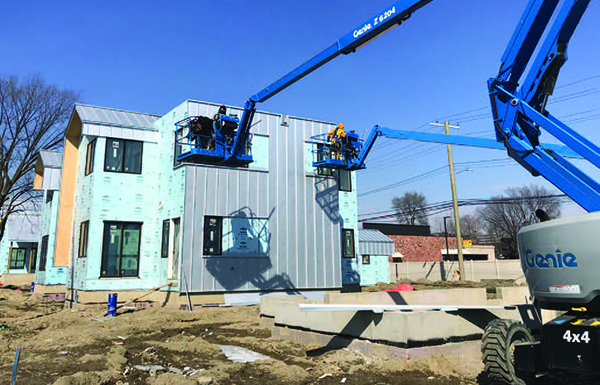 Detroit has been dubbed America’s Comeback City and Detroit-based contractor Custom Architectural Sheetmetal Specialists (CASS) is taking a rooftop seat in its recovery.

CASS is helping build an upscale subdivision of 14 houses in midtown Detroit near Wayne State University, installing the metal roofing and siding. They are also assisting with the roofing design, working with the Smith Group, a local architectural firm. The developer is Midtown Detroit Inc.

Several styles of houses are going up in the two-block area, each ranging from 1,200 to 1,700 square feet, and two stories high. Glenn Parvin, owner and president of CASS, estimates that 2,000 square feet of metal is being be used on each house.

While working on the roofing with the Smith Group, CASS weighed in on the pros and cons of various metal roofing systems. The sheet metal firm’s expert feedback led the contractor to switch from 12-inch panels to 16-inch panels as a value engineering option, along with adding drip flashing to separate the vertical sections from the sloped elements. 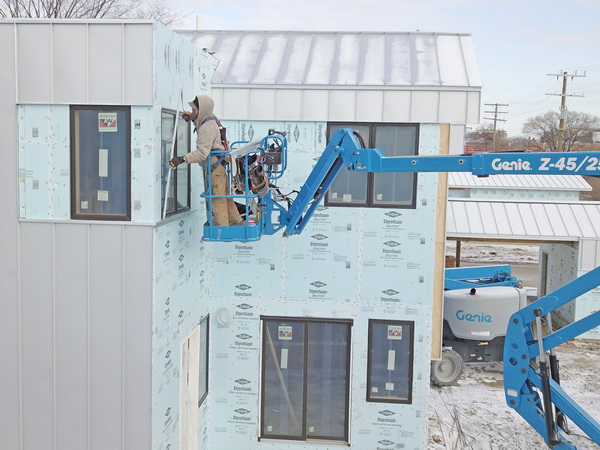 Based on the number of different-sized panels along with the size and number of homes, it didn’t make sense to order the panels from an out-of-state manufacturer, Parvin explained. Instead, CASS fabricated them in the shop on their own. They used their Berridge roll forming machine to produce the cee-lock standing seam roofing system in their own shop. For the panels, they used 24-gage galvalume (which is 55 percent aluminum-zinc alloy coated sheet steel) to create panels 16 inches by 1.5 inches for the roofing systems.

CASS has seven sheet metal workers from Local 80 currently working on the site. Parvin estimates that his team will be finished in six to eight weeks.

“Such metal roofing systems provide great long-term value to the homeowner as they are generally maintenance-free in excess 30 years, often exceeding 50 years,” he explained. “This makes metal roofing a good value when reviewing lifecycle costing, which is the average cost per year based on the life of the roof system. The anticipated life of the roof system combined with the inherent fire-resistant characteristics of the metal often qualifies the homeowner for insurance savings.”

These roofs in particular involved a lot of detail work. “There are vertical panels tied into standing seam roofing,” Parvin noted. “You have multiple slopes on the roof. You have the porches tied in. There are some other cement panels tying into the vertical panels, so there's a lot of start and stop detail work and detail transitions.” The multiple slopes with many transitions and numerous interfacings between other siding elements meant that paying attention to detail was key.

His team will spend roughly 4,500 man-hours on the midtown neighborhood project. Nine of the 14 houses have already been sold, with move-ins starting in April and May. This project is creating more opportunities for Parvin and could lead to similar projects in the near future.

Overview of the 14-house mid-town development.

CASS generally focuses on commercial work and has been involved in many projects that have spearheaded the revitalization of his beloved Motor City. They include restoring the roof of the Henry Ford estate, working on Detroit’s Book Tower, and installing the exterior paneling on the Detroit Red Wings Little Caesar’s Arena, as well as several other restoration projects in the city.

This residential home-based project in Detroit has also energized Parvin. “I've spent my entire career there,” he said. Parvin, who has served as chair of SMACNA’s Architectural Sheet Metal Council Steering Committee, added “CASS is now 28 years old. We've never been anywhere but Detroit. We were in Detroit before it was cool to be in Detroit. So, we're proud to be involved and proud to witness this comeback.”

The city has mandated that certain projects employ a percentage of businesses headquartered in Detroit. This is possibly “one of the reasons we got the housing complex,” he noted. “It wasn't mandatory though. We were a good metal roofing contractor that came recommended by the architect who also happened to be a city of Detroit business. The developer wanted to work with Detroit-headquartered businesses as well.”

Parvin credits the pivotal role that business people have played in Detroit’s revitalization, like Mike and Marion Ilitch, owners of Little Caesars Arena, and Dan Gilbert of Bedrock Development, who has invested $5.6 billion in nearly 100 properties downtown.

Parvin is enthusiastic about the opportunities that lie ahead as CASS continues to play a part in rebuilding the city he loves.