Matherly Mechanical Contractors has been working at Tinker Air Force Base since the 1960s — taking the lead as well as subcontracting on a wide variety of HVAC, sheet metal, and mechanical jobs. 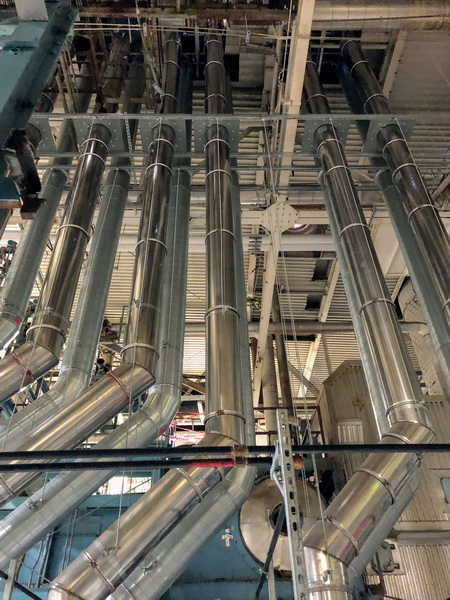 Matherly Mechanical Contractors has been working at Tinker Air Force Base since the 1960s — taking the lead as well as subcontracting on a wide variety of HVAC, sheet metal, and mechanical jobs across this massive Oklahoma installation.

Tinker AFB is the headquarters of the Air Force Materiel Command's Oklahoma City Air Logistics Center, which manages a range of aircraft, engines, missiles, software, and accessories components around the world. The base has hundreds of buildings, is home to more than 26,000 military and civilian employees, and covers nine square miles.

In 2017, the U.S. Air Force's largest energy savings contract ever bid brought this Midwest City, Oklahoma SMACNA contractor to a particular maintenance depot that has a historical significance to many Americans: Building 3001.

“It was an honor and very exciting to be chosen as the mechanical contractor on this special project,” said Mike Clark, Matherly Mechanical’s vice president of sheet metal operations.

The huge maintenance depot referred to as Building 3001, was built in 1943 and served as the birthplace of thousands of Douglas C-47 Skytrain transport planes during World War II. Since then, the high-tech aircrafts produced there have continued to evolve, but the upgrades to the facility's aging HVAC systems have lagged behind. Measuring seven-eighths of a mile long and 1,000 feet wide, the 2.4 million-square-foot maintenance structure features areas devoted to paint and stripping planes, work areas for dissembling engines, and aircraft systems along with cleaning, reassembling, and testing them.

Matherly's job was to remove all the facility’s existing steam heat and air handling units while adding new direct-fired gas make-up air units to provide the fresh air for the building’s production and administration areas. It was all part of a base-wide energy retrofit initiative to help the Air Force meet federally-mandated energy consumption reduction goals.

The overall facility modernization project contract, led by Honeywell, totals $243 million, and involves many other base facilities in addition to Building 3001. All together the project should save Tinker AFB $626 million in energy and operational costs over 21 years.

The project focuses on upgrading infrastructure and industrial processes at the base's production facilities to make the buildings more energy and operationally efficient. The work includes:

Among the major equipment Matherly installed for the Building Steam Optimization Project, the list included: 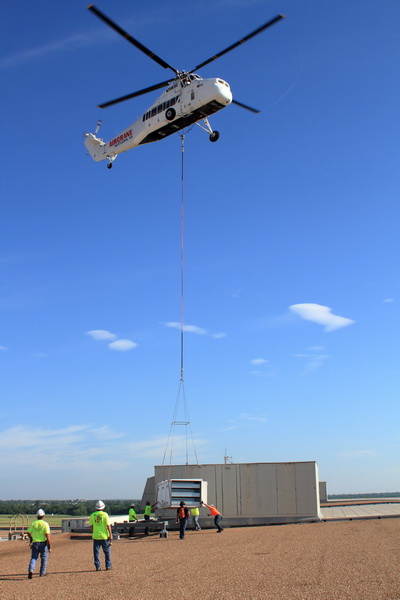 “All of this work had to be performed with no disruptions, as Building 3001 had to remain a fully operational aircraft maintenance depot,” Clark explained. The two-year mechanical portion of the contract is mostly done, he said, and will be complete this summer.

To minimize disruptions and save money, Matherly scheduled rooftop placement for the giant air handlers to be installed all on the same day, on Memorial Day 2018. It was quite an undertaking.

“A conventional crane could not be used because of the long distance of the lifts (from the staging area to the rooftop) and the short time frame,” Clark said. “Therefore, a Sikorsky S-58t heavy lift helicopter from Aircrane Inc. was utilized to perform all of the roof lifts.”

Building 3001 has personal significance for Clark, who is an Air Force veteran and former SMACNA Board member. Like the famous World War II icon Rosie the Riveter, Clark's mother riveted sheet metal on Douglas C47 airplanes in the very same building in the early 1940s. It's an interesting coincidence that Clark and his team are working in the exact same building, installing vast amounts of HVAC ductwork and sheet metal.

“It's kind of neat to work in a building that old, which is still so viable and vital,” he said.

Clark is captivated by the post-World War II history of Building 3001. An incredible variety of military aircraft have seen the inside of Building 3001, including B1 Bombers and the Enola Gay B-29 Superfortress, just to name a couple.

“It's one heck of a maintenance facility,” Clark added, “I love working at this job site. I've always liked airplanes.”

For Clark and other airplane enthusiasts, Matherly’s headquarters is in a prime location. It lies right along the flight path for aircraft taking off and landing at Tinker AFB, just a mile from the base. So, if Matherly’s employees ever need a reminder of the important work they are doing at Tinker AFB, they just need to look up.