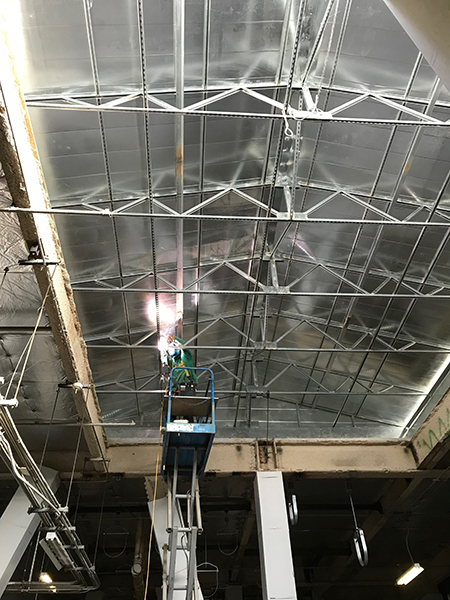 AerDux had to manufacture and install a 20’ x 30’ removable “truss-like” roof protection to allow equipment in and out of one area.

It was a Thursday when Bob Werner got the call he’d been waiting for. The Philadelphia Streets Department had approved his application to close a portion of Market Street for the coming weekend, so AerDux could set up cranes and lift more air handling units at the Center City job site. Considering how often these street closure applications are denied, this was good news — sort of.

The problem? The closure was approved for Easter Sunday. The date was actually April 1, 2018, but this was no April fool’s joke.

Werner, Project Superintendent at AerDux, Incorporated — a woman-owned SMACNA contractor based in Bellmawr, N.J., quickly got on the phone to see who would be willing to work on the holiday.

“The fact that our employees were willing to work Easter Sunday says a lot about AerDux employees,” said Gina Onorato, vice president at AerDux. “We really didn’t have another option. The city of Philadelphia requires approval before shutting down Market Street — a major roadway in Philadelphia’s shopping and business district. Previously denied applications were putting us at risk of being behind schedule.”

Onorato was also the project manager for this job — a large HVAC retrofit for high profile commercial initiative known as the Fashion District of Philadelphia. It is being marketed as Philly’s newest destination for shopping, dining, entertainment, art and culture. The project started in December 2016 and then grew extensively in scope. The difficulty planning for street closures was more of an expected annoyance. 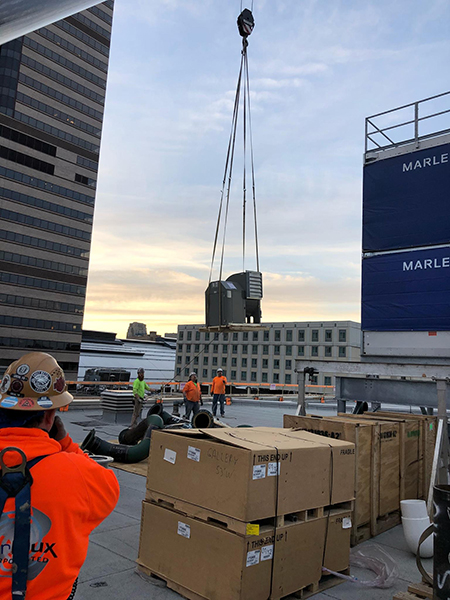 In all, 14 sheet metal workers and pipe fitters work 14 hours to lift a total of 27 picks for the project.

“You apply two weeks prior to the date, and they give approval the Thursday before the lift. We applied for dates multiple times, and they either approve or deny based on whatever is going on in the city that weekend. One time we were denied because there was a marathon race in Center City. I guess there were no big Easter egg hunts planned for that Sunday.”

Under the supervision of Werner, a crew of 14 sheet metal workers and pipe fitters worked a 14-hour shift that Easter. They lifted 27 picks, the last of which was nearing the darkness of night. In an effort to streamline the process and assure items were rigged in the proper order, Werner planned and tagged each section ahead of time.

“This pre-planning was critical in getting each section up and in the building in as timely and orderly a manner as possible,” Onorato explained. “The unit sections were delivered to our facility K/D (knocked down), and stored until we needed them on site. This assured that we had everything we needed at the time of the crane lift.”

An additional challenge involved lifting AHUs to an inaccessible interior area. There were no roof or wall openings available. AerDux had to create a 20’ x 30’ removable truss-style opening in the roof where certain units were lowered into the building.

“We designed, fabricated and installed this removable section to facilitate the lift,” Onorato said. “Since the building was existing, and part of the building was occupied, we had to work around those tenants and structural elements.” 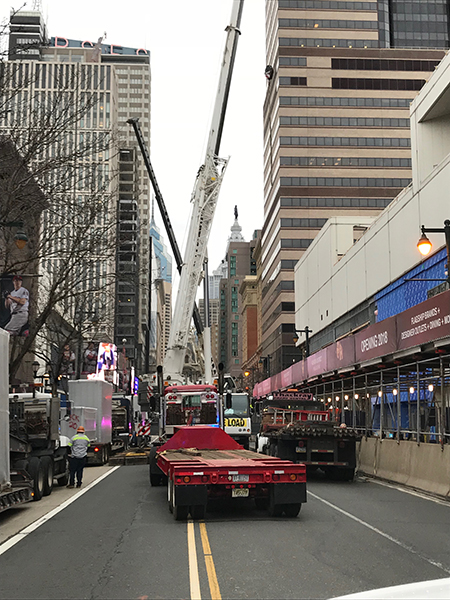 Much work and preparation was required to stage and set up the crane on Market Street in downtown Philadelphia.

Another unique element for the Fashion District project was the installation of an Accurex Electrostatic Precipitator (ESP), which is designed to remove smoke, grease and odor from the kitchen exhaust system in the new food court area. According to Onorato, as air enters the ESP cell, it passes by an ionizer that positively charges the particles in the airstream. The particles are attracted to negatively charged plates like a magnet. These plates then remove the contaminants from the airstream, eliminating the need to change out costly filters, thereby reducing maintenance and downtime.

Like many of her coworkers, Onorato grew up near Philadelphia, so she remembers efforts to attract shoppers back into the heart of the city with the Gallery, built in 1977. This four-story mall was a success for many years, but began to lose customers and stores due to changing consumer tastes and some incidences of crime on and near the property. The Fashion District, which had its grand opening Sept. 19 of this year, occupies many of the old Gallery buildings — covering over three city blocks and a number of bridges taking shoppers over busy streets from one destination to another.

“I am looking forward to patronizing the area once it is complete,” Onorato said. “I believe it will be a great addition to the city and for me, is just a PATCO train ride away like I used to do with my mother back in the 1970’s.”

“We are very proud of our crew and the work performed as this was one of the largest air handling unit replacements in the region recently,” Onorato said. “It was a pleasure working for Shoemaker-Skanska Joint Venture (construction manager) and Macerich (developer) and we look forward to further opportunities like this.”

Will future opportunities mean possibly working more holidays? AerDux is ready — whatever is necessary to get the job done.