Big Purchases Are About More Than Dollars And Cents

Research is essential when buying the heavy machinery required to compete in the sheet metal and HVAC sector.

This Iowa Precision Pro-Fabriduct with an Inline Plasma cutter is being installed at Hermanson.

Buying new equipment is fundamental to owning and operating a sheet metal and HVAC contracting business.

That doesn’t mean purchasing decisions are simple, however.

With much of the heavy machinery required to compete in the sheet metal and HVAC sector pricing out in the range of six to seven figures, executives in the industry emphasize that research is essential when making critical investments in the equipment that powers their businesses. Moreover, they say their purchasing decisions frequently take into account factors beyond just dollars and cents.

Miles on the tires

But what prompts companies to buy new equipment in the first place?

In some cases, contractors liken purchasing decisions for sheet metal and HVAC equipment to the calculus behind buying a new car. At a certain point, pouring more money into maintenance and repairs becomes more expensive than just shelling out for a new set of wheels. The same goes for the equipment involved in contracting work.

Ventcon, a full-service sheet metal contractor based in the suburbs of Detroit, recently revamped the shop where it performs its design and fabrication. The company spent north of $2M on new equipment for the facility. The major enhancements included replacing the coil line and replacing the plasma table with a coil fed laser cutter. Additional equipment included a waterjet cutter, spiral machines, and a vane machine, all of which Ventcon did not previously own.

“Basically, we had used the older equipment up,” says Todd Hill, president of Ventcon. “It was time to move on.”

Often, companies want to work smarter or to take advantage of an opportunity to expand their services, so their purchasing decisions go beyond just necessity. 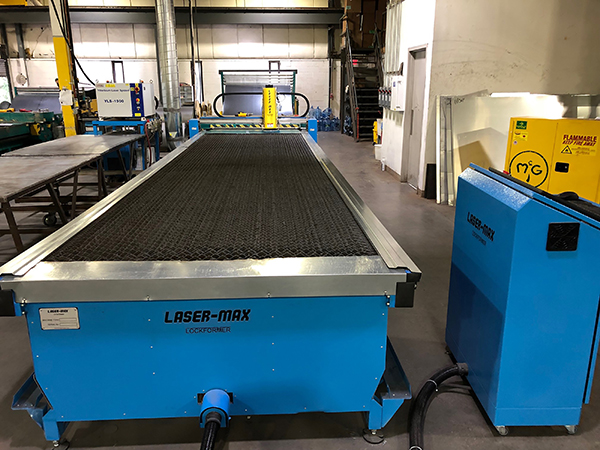 “In order to stay current in our business and competitive, we’re looking for the latest and greatest technology,” says Mark Austgen, the president and CEO of California Sheet Metal, an architectural sheet metal firm that routinely buys new equipment. “You’re buying equipment for the finish and the quality that it can produce, but to stay competitive, you’re also looking for the efficiency that comes with it.”

“I’m always keeping my eyes and ears open to what the industry has to offer with changing technology,” notes Kevin Gill, president of commercial sheet metal contractor McCusker-Gill Inc. in Hingham, Mass.

McCusker-Gill relocated to a new 60,000-square-foot manufacturing facility five years ago. The move included buying the expected big-ticket items like a new coil line and a laser cutter. The company also made enhancements such as finishing its concrete floors to ensure a dust-free environment and adding a continuous automatic welder.

“These changes all make us more efficient and hopefully give us a little bit of a competitive edge against our fellow competitors,” Gill says.

Some companies are now looking to automation to boost productivity and speed. California Sheet Metal is one.

“Our customers are general contractors,” Austgen says. “They want the best quality and they want it as quick as they can get it.”

At Hermanson Company LLP, investing in automated technology has cut down on the time required to perform a number of standard assembly tasks. In the process, that equipment has freed up space in the shop for other work, according chief operating officer Troy Lowery. For example, Hermanson’s new coil line has enabled the company to automate five production process that were previously done manually.

“The longest payback that we have on the new pieces of equipment is five years,” Lowery says. “Some of them pay back within a year.”

Of course, equipment that offers a competitive edge one day frequently becomes industry standard the next. Companies that don’t invest in new gear can find themselves falling behind in those instances.

Another important aspect of purchasing decisions: marketing. Executives at sheet metal and HVAC companies agree that customers appreciate the peace of mind that comes from knowing their contractors are working with solid equipment. McCusker-Gill even offers a guided tour of its facilities to clients and prospective customers to show off the machinery. 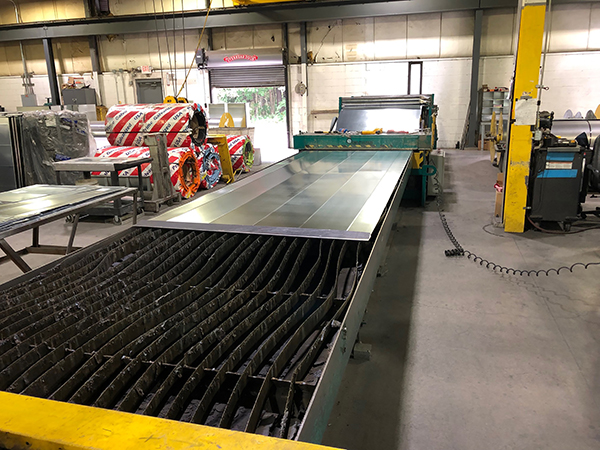 “We try to get clients and customers into our facility as often as we can, Gill says. “It sells itself.”

Purchasing new equipment offers added marketing benefits when the machinery can expand a contractor’s production capabilities, according to Hill. He says that by investing in new equipment, Ventcon has been able to bring more of the manufacturing work for projects in-house, which Hill maintains is a bonus for customers.

“We can say that we have that control” (over all aspects of manufacturing and installation), he notes.

The research that goes into purchasing equipment can get rigorous, especially in the case of big-ticket items.

Earlier this year, California Sheet Metal installed a new automated fiber laser in its shop in El Cajon, Calif. According to Austgen, it took about eight months to reach a decision on which laser to buy. In fact, a different model would be occupying that spot in the shop if the company had made a decision eight months earlier.

The two lasers under consideration “were both great, but for the certain type of work we do, one fit our needs just a little bit better,” Austgen says. “The one we were leaning towards halfway through the process is not what we went with.”

While Hermanson was evaluating its equipment overhaul, Lowery visited eight different shops of the companies in its peer group across the country to get a feel for what kind of machinery they were using. Manufacturers accompanied him in some cases to give him better insight into how the equipment was being deployed.

Lowery estimates he visited no fewer than 14 shops during a two-year period, looking at the equipment, layouts, and workflows. The process helped Hermanson arrive a crucial determination about how to proceed.

“It was important for us to have one manufacturer, one source of accountability, one number to call for all of our equipment,” Lowery says. That helped Hermanson identify Mestek as its vendor of choice for the new machinery.

After all the time and energy devoted to research, Hill says Ventcon found that one of the biggest benefits of the company’s new equipment was the impact on employee satisfaction around the shop.

“The new equipment is more productive, and it’s cleaner,” Hill says. “Once we moved on from our old equipment, it created a new excitement in the company.”

New Layout of Hermanson shop after value-stream mapping. To see the before picture, visit SMACNews online.

The concept of so-called “lean production” is far from new in corporate America. Adapted from the Japanese manufacturing sector, lean systems seek to ruthlessly eliminate waste or excess from production. That applies to labor and time in addition to the physical materials involved in production.

Based in Kent, Wash., Hermanson Company LLP has used a lean process known as value-stream mapping (VSM) to redesign the shop where it performs sheet metal construction work. In the process, the company has increased its rate of production by 25 percent, while maintaining the same number of employees as it had before the redesign. 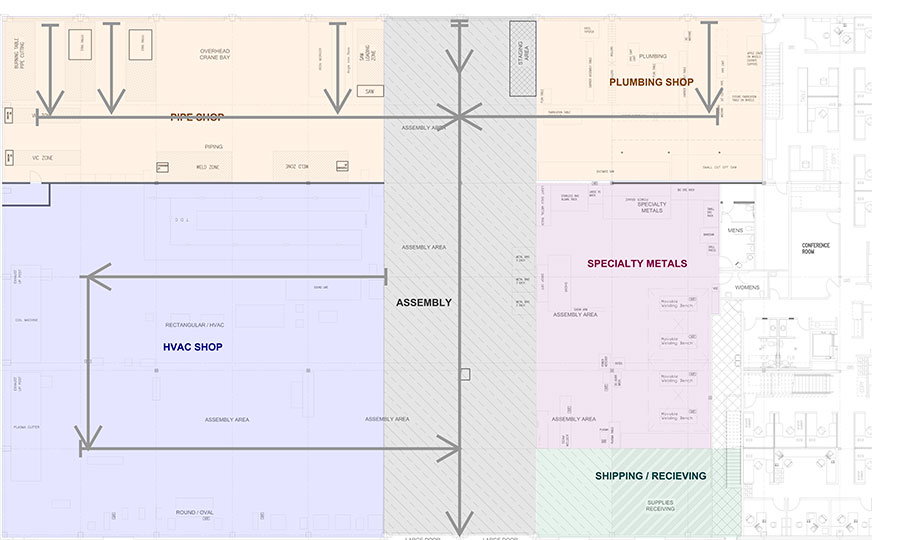 Broadly speaking, the objective of VSM is to boost the efficiency of production by identifying the individual processes that do and do not add value to the end product or system as a whole. Once complete, organizations try to cut back on non-value-added steps and waste, such as excessive amounts of inventory and time spent waiting. 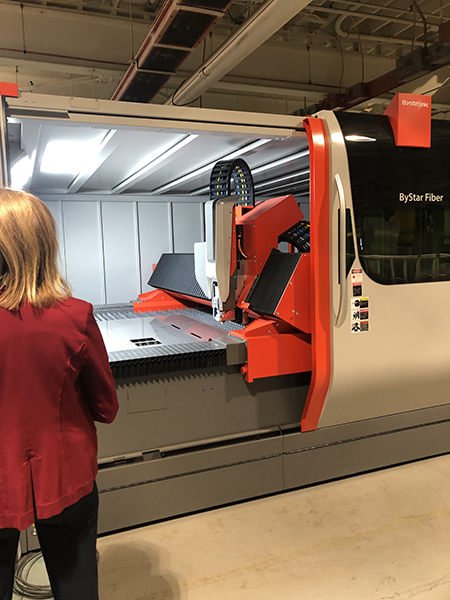 In 2017, a team of researchers from the University of Washington performed a VSM analysis of Hermanson’s modular assembly production. The process under evaluation involved working on materials at five different workstations within the company’s shop for fabrication, preassembly and delivery of HVAC, piping and plumbing systems.

Along the way, the researchers tracked which activities added value to the finished product. For instance, when machines manipulated materials, such as bending sheet metal, it added value to the product. On the other hand, time spent transferring the materials from one station in the shop to the next did not.

A new way of doing things

According to Lowery, the researchers’ findings opened the Hermanson management team’s eyes to the benefits of overhauling the company’s shop environment. “We were saying, ‘We’ve been doing the same thing the same way for a long time,’” he recalls.

The company began reconfiguring workflows in the shop and
re-sequencing some production steps, and Lowery says the changes had a “snowball effect” in which they built on each other to become even more efficient. Hermanson invested $3M in new equipment for the shop. Shop workers also collaborated with management on designing the new layout, tinkering with different options to figure out which worked best. That process opened up 4,000 square feet of flexible space for one-off design and manufacturing products.

The redesign has reduced waste in the Hermanson shop by roughly 22 percent, according to Lowery. Meanwhile, he says the working environment has improved for shop employees. Not to mention, Lowery points out that the quality of Hermanson’s products has gone up, too.

“I think we’ve got something pretty cool and pretty special in the making here,” Lowery says.