The team faced many challenges, including the size and weight of the booths. 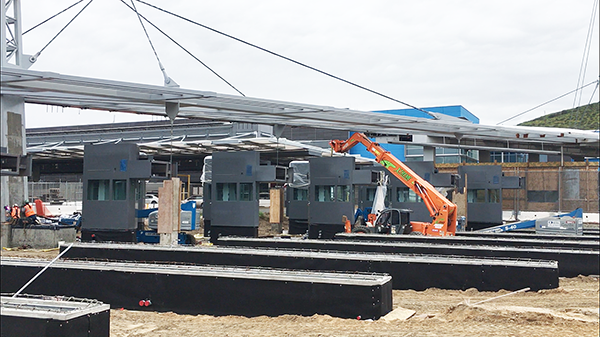 A few of the completed booths in place at the US/Mexican border.

For the exterior of the booths, California Sheet Metal used quarter-inch thick, class-3 ballistic steel, specifically for bulletproof enclosures and blast proof construction. With as many as 20 employees working on the project at one time, they formed and cut all the pieces, made the enclosure, buttoned, installed the windows (made of special glass), and made all the interior cabinets, doors and countertops. A third-party contractor installed the electronics and the operating system inside the booth.

During construction, the team faced two main challenges. The first was the size and weight of the structures — the largest booth weighed 14,600 pounds. They had to build the booths outdoors, on a one-acre site next to their facility, then use lifts to maneuver them around. 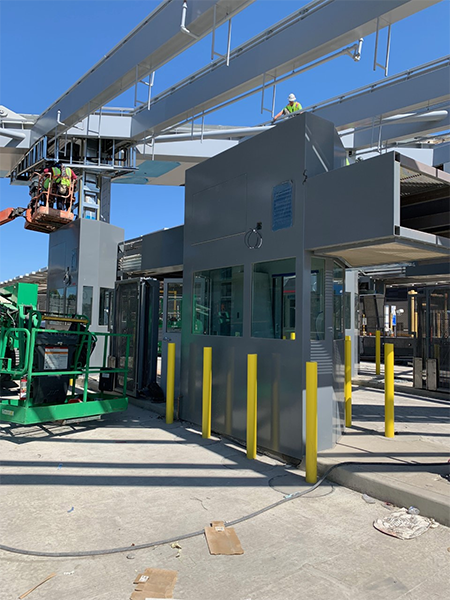 Installation was difficult due to the overhead canopy and raised concrete foundation.

Once the units were constructed, they were loaded onto trailers and transported approximately 30 miles to the Mexican border for installation, which also had its own challenges. Because of the canopy and the weight, they had to slide the structures into place, which required special rigging.

Another challenge was the frequent visits from US Customs, US Border Patrol and the General Services Administration (GSA). “Inspectors would constantly review the construction,” Isom said. “They were constantly making changes during the construction to accommodate ergonomics and comfort of the actual border patrol officers.”

One of these changes stemmed from the fact that Border Patrol and US Customs officials spend all day standing with guns at their sides. California Sheet Metal made steel “leaning posts” with side panels that contour to the shape of a body with a gun at its hip. Also, internal heating and cooling elements give the workers control over the temperature of their workspace.

Adding to the challenges at the project, California Sheet Metal also dealt with something unique called “runners.” According to Isom, “On a weekly basis, they would have some kind of temporary work shutdown due to somebody trying to run across the border or run back.”

California Sheet Metal has been working on this project for almost two years. Project manager Paul Lupo anticipates that the last panels connecting the booths will be installed by the end of October 2019.

Though this job has had some unique challenges, Isom takes pride in the fact that this was a turnkey project. “When the booths left here, they were complete,” he said. “All electronics, all the shades on the windows — everything was basically in there when they were set onto the truck and taken down to the border.”

It was also nice knowing that they had created a product that would work for the officers, partly due to the constant feedback during construction. “It caused some delays, but at the same time, it made us feel good because they’re getting what they need,” Isom said.