Matherly Mechanical’s facilities upgrade at Tinker Air Force Base is big on numbers. Read on for some of the notable ones. 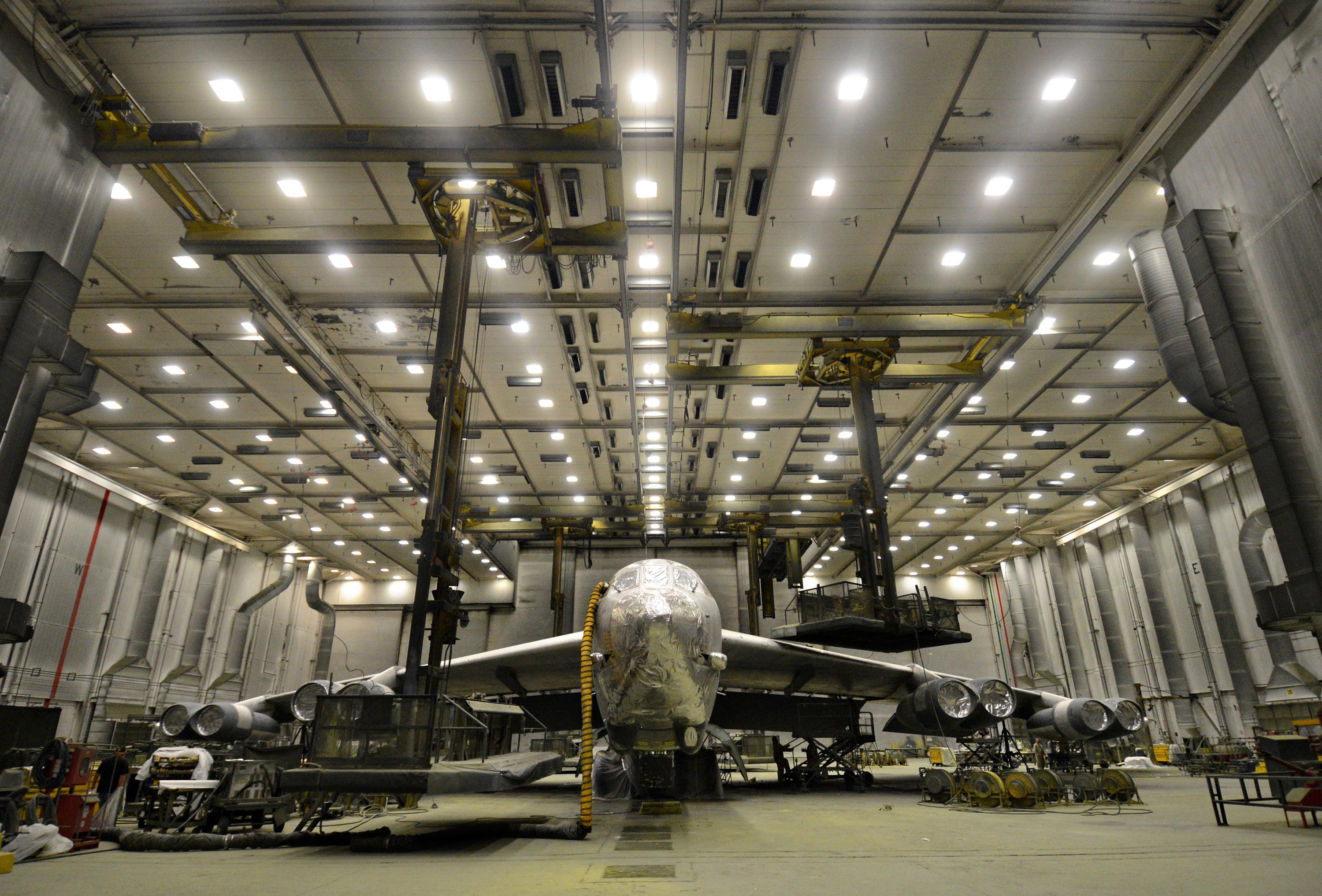 One of the two bays at the 133,280 sq. ft. hangar used for stripping and painting aircraft.

Matherly Mechanical’s facilities upgrade at Tinker Air Force Base is big on numbers. Here are some of the notable ones.

549,743 CFM
They say a picture is worth a thousand words, but for SMACNA contractors, a number can be more telling. 549,743 CFM (cubic feet per minute) is the supply air flow rate at Tinker Air Force Base’s (AFB) Building 2280. Such a high CFM usually indicates a project for a very large space.

When Matherly Mechanical’s Mike Clark got word that they were going to upgrade the HVAC systems at Tinker AFB’s industrial space, he knew there would be some big numbers. Clark, vice president for sheet metal at the Midwest City, Oklahoma-based Matherly, has led many projects at Tinker in nearby Del City, so he was familiar with Building 2280. It is a 133,280 square foot, two-bay hangar for stripping and painting giant B-52 bombers, which is necessary to control corrosion on the aircraft. 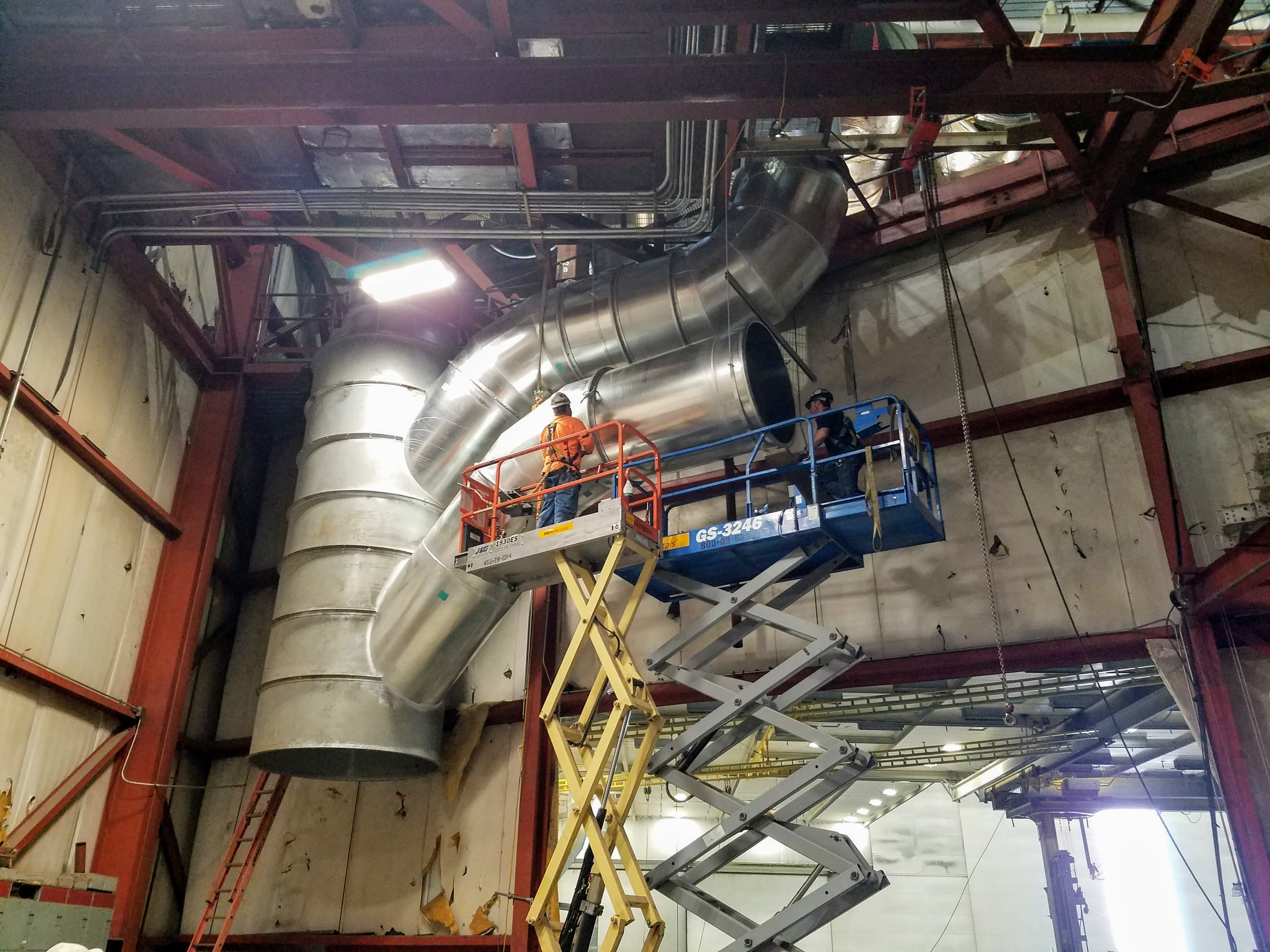 Clark noted that the scale of this project is also measured by its importance to the U.S. Air Force. “The B-2280 Corrosion Control Facility is a very vital building at Tinker Air Force Base,” he said. “This facility runs two shifts year round and always has a waiting list of aircraft that need to be refinished. It was a pretty good juggling act to do this project, with such a high demand.”

Matherly took a staggered approach, doing one bay at a time, so the Air Force could still bring in some B-52s for maintenance.

168,397 MMbtu
That’s the estimated annual gas savings (in millions of British Thermal Units) that will be achieved with the Building 2280 upgrades. Climate control in a huge facility like this is typically expensive, but the primary goal of the retrofits is energy efficiency. The project is part of a base-wide $243 million energy efficiency initiative. In total, the overall effort aims to save Tinker $626 million in energy and operational costs over 21 years. 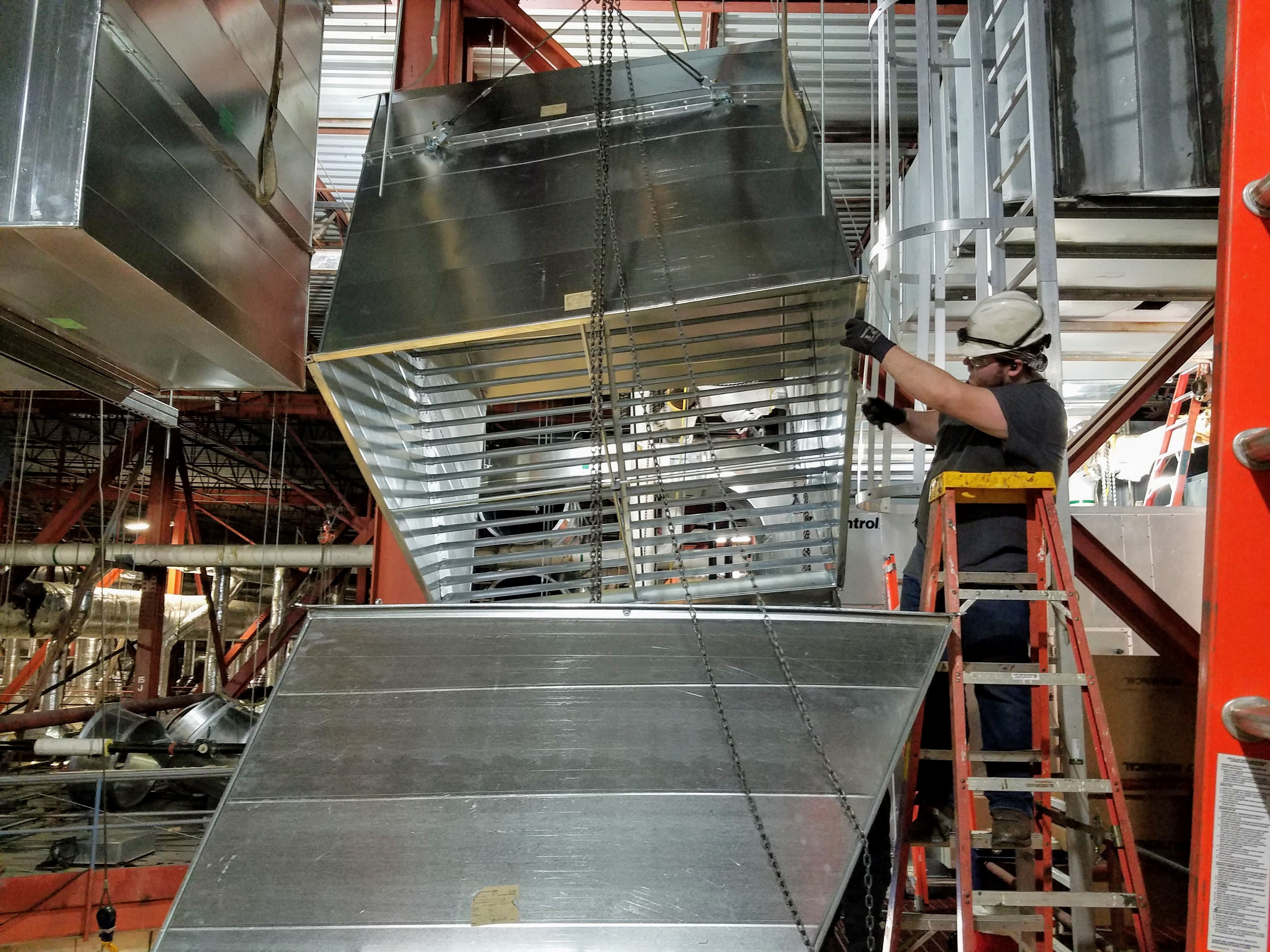 “The central base steam plant had massive amounts of return condensate leakage in the system which made it very inefficient,” Clark said. “The gas savings are from converting the steam heating source from a central plant to five Hamilton high-efficiency, full-modulating condensing boilers, and seven heating water circulating pumps onsite,” says Clark.

“We are also cutting electrical consumption by reducing the airflow rate, and by recirculation a 70 percent of the indoor air in the winter and summer months,” Clark continued. “The prior design was 100 percent outside air with no recirculation. The total savings on the project are an estimated $2.5 million in operations and maintenance per year, and around $1.5 million in energy annually.” 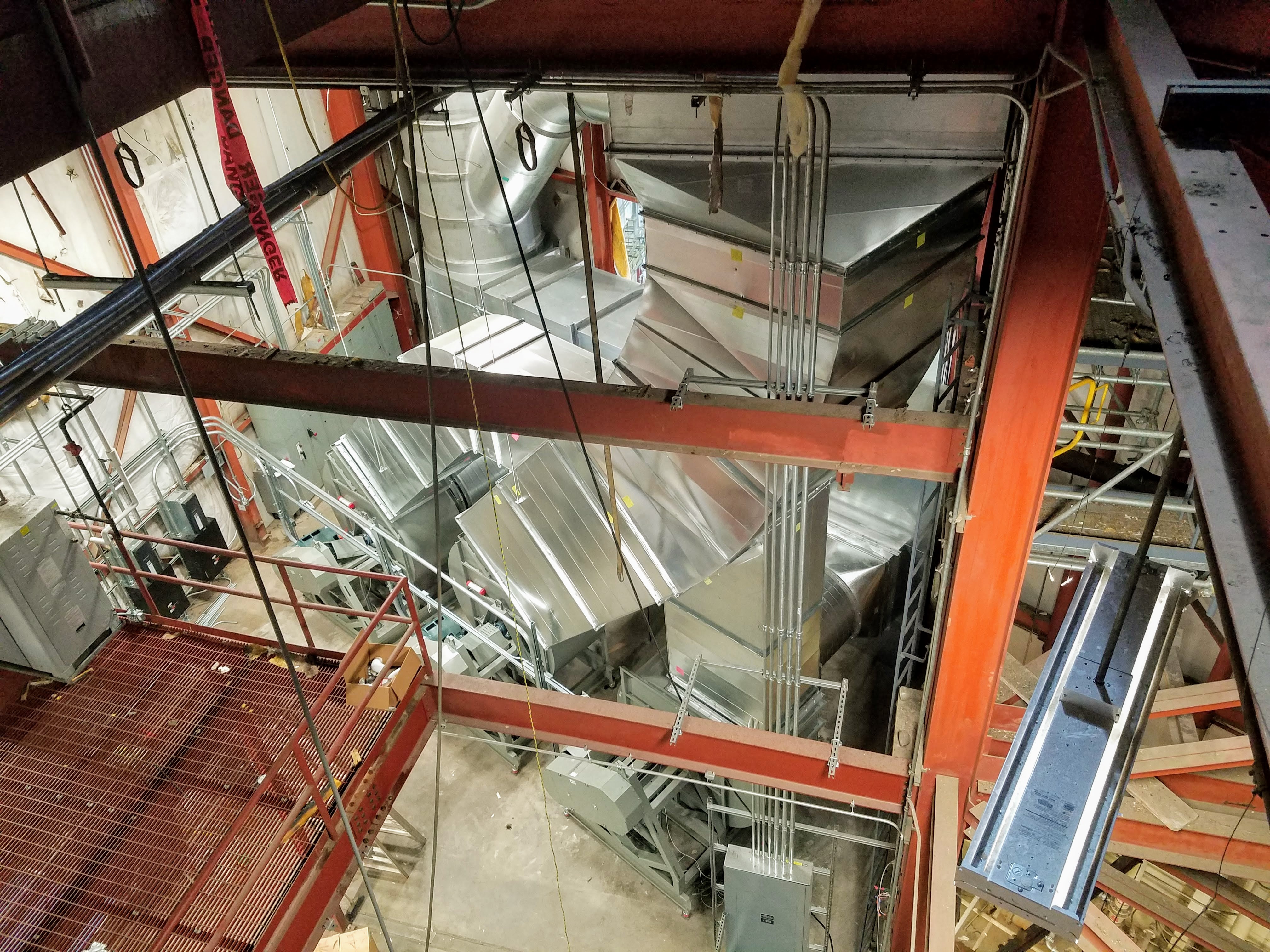 Both bays were finished and commissioned in March 2020. Clark said it took three months in each bay to demolish the existing systems, leaving only eight months per bay for new installation. New equipment includes an Energy Management Control System (EMCS) and Demand Control Ventilation.

“Honeywell provided the smarts and parts, while Matherly did all the setup, testing and balancing,” Clark explained.

The EMC is programmed so that Air Force technicians can preset environmental specs for seven different modes: depaint, paint, cure, prep, general maintenance, unoccupied, and off.

The following specs are the targets for bay 2 paint mode:

These various modes of climate control would not have been possible with the old HVAC system, which lacked any functioning humidification equipment. Matherly installed 10 gas-fired humidifiers, which add up to 600 pounds of moisture per hour in the winter months.

84-Inch Duct
This large number is probably no surprise, considering the incredible volume of air flow in the new HVAC system. Equipment highlights from the project include: thousands of feet of 4 inch through 10 inch pressure class duct, ranging from 48 inches to 84 inches diameter round duct, and rectangular duct up to 144 inches. Matherly also installed, (15)100hp and (4) 125hp exhaust and recirculation fans, and (8) Temtrol air handling units. National Emission Standards for Hazardous Air Pollutants (NESHAP) 319 filtration is utilized for all exhaust and circulation air. 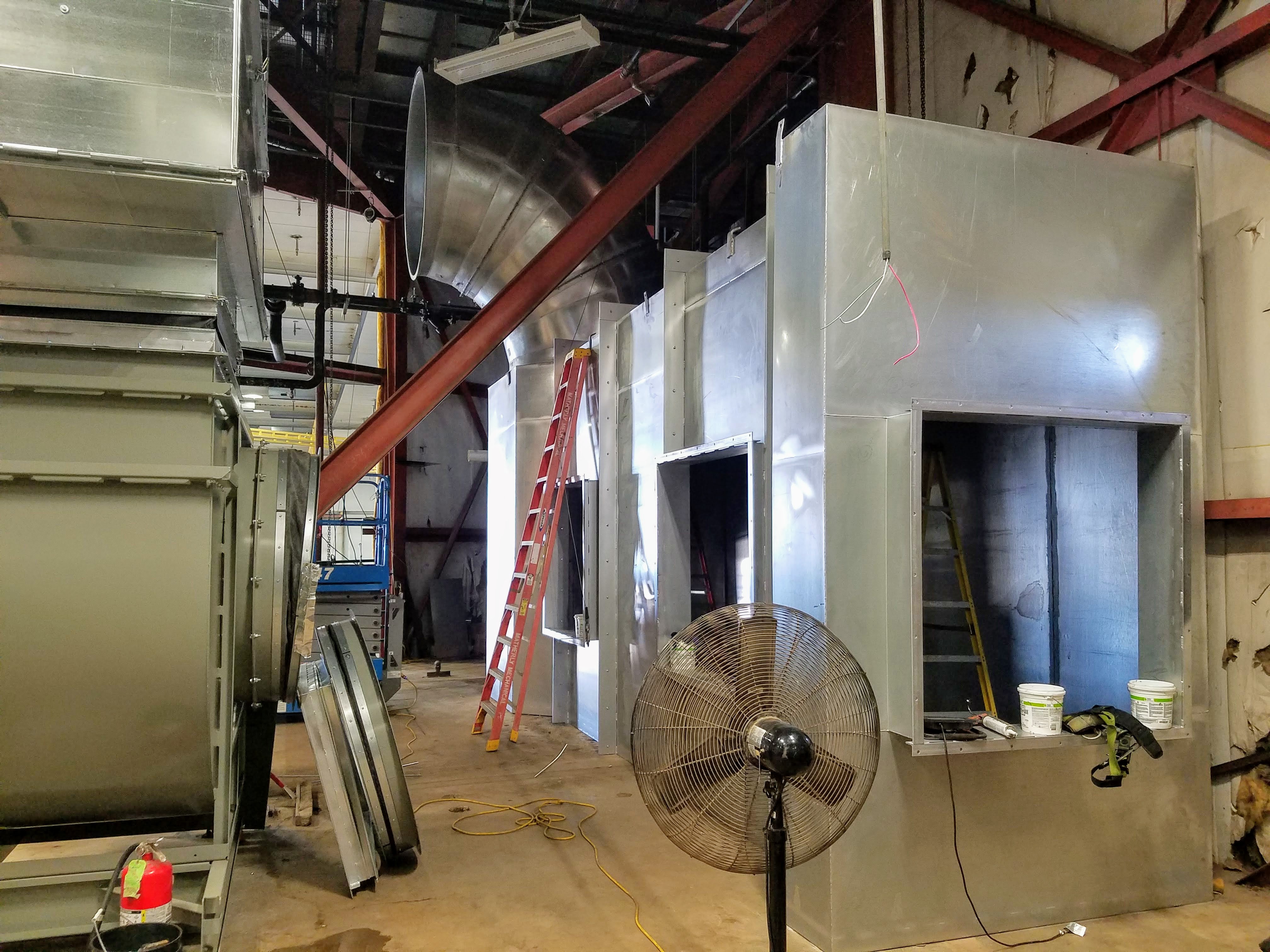 Matherly will certainly have more big Tinker projects in the future. Over the past 50 years, the SMACNA firm has been taking the lead and subcontracting at the base on a wide variety of HVAC, sheet metal and mechanical jobs. The gigantic base is full of oversized buildings in need of their skill and experience. For example. Building 3001, where Tinker completed a steam-to-gas conversion project a couple years ago, is almost a mile long.

“We prefer the larger and more difficult projects because we like a challenge and it reduces the competition.” Clark said.