The North Satellite (NSAT) Modernization Project combines leading-edge engineering with natural motifs to create a high-tech space with a biophilic design — one that appeals to people’s innate love of nature. 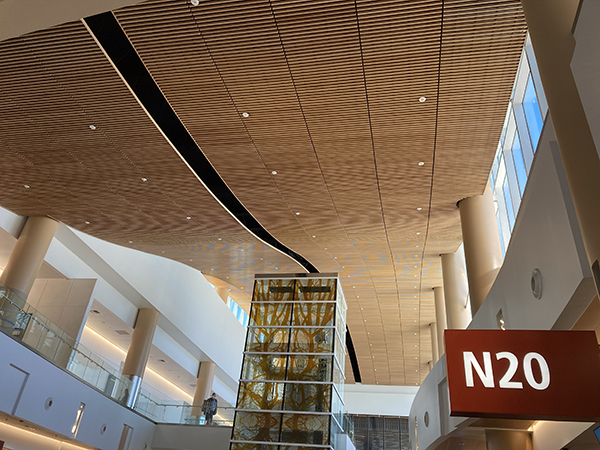 The finished ceiling and surrounding design is known as ‘the river.’

One of the fastest-growing airports in the United States, Seattle-Tacoma International Airport (SEA) served over 50 million passengers in 2019. In 2017, the airport began an expansion of the 47-year-old North Satellite, a busy hub located three minutes by tram from the main terminal. The North Satellite (NSAT) Modernization Project combines leading-edge engineering with natural motifs to create a high-tech space with a biophilic design — one that appeals to people’s innate love of nature. “We wanted to bring light into a larger open space as a sense of place for the Pacific Northwest,” says Ken Warren, NSAT Project Manager for the Port of Seattle. “The exterior design evokes a river flowing through the facility.”

The modernization project is doubling the square footage of the North Satellite with 100,000 square foot of new construction tied into a 100,000 square foot refurbishment of the original building. Phase 1 added 10 new gates, and Phase 2 is renovation of the old facility. Phase 2 of the project encapsulates the 1973 structure with new construction in a “seismic hug” that will maintain building integrity in case of an earthquake. Keeping the original columns and major structural beams saves time and money, while the new construction securely braces the old and brings the whole facility up to modern codes.

Hermanson, one of the Pacific Northwest’s largest mechanical contractors offering HVAC, plumbing, engineering, tenant improvements, service, TAB, and commissioning across Washington and Oregon, has been with the project from the beginning. 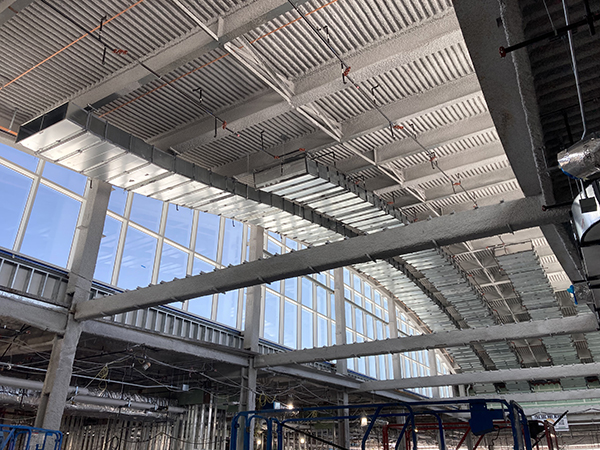 Hermanson began collaborating with the design team in 2016, completing Phase 1, and transitioning to Phase 2 in June 2019. “The phases have been intense,” says Dan Nugent, project superintendent for Hermanson. “We had to bring in two temporary air handlers, put them on the roof, and temporarily duct them in to get Phase 2 commissioned. We currently have seven air handlers but will disconnect the temporary units once the system is complete. During Phase 1 we built a brand-new mechanical room that handles both Phase 1 and Phase 2.”

Those AHU support one element of the North Satellite design. Three intersecting lines of rounded ceiling emulate rivers and within each ‘river’ there are four ducts to eliminate smoke if there is ever an event. The smoke control systems protect life and building by creating positive pressure zones that push toward any fire, exhausting air out of the fire. 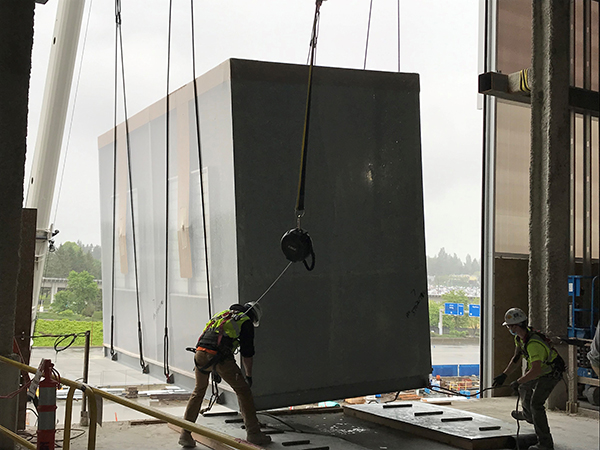 Once the AHU sections were lifted to the third floor, a series of pullies and winches were used to move them.

Safety and high air quality are top priorities at SEA Airport. “There are people in our facilities group who’ve been forward-looking for about 20 years,” says Warren. “They responded to 9/11 and to SARS by employing the best technology available in the HVAC systems we built in the early 2000s. We don’t need changes in our filtration standards because of COVID as our filtration bank already removes particles smaller than the virus.”

With the current renovation, SEA Airport continues its tradition of investing in the best HVAC systems possible. “We chose the mechanical electrical contractors based on what they brought to the table, things like BIM and the ability to solve problems,” adds Warren. “We have been very pleased with the partnership with Hermanson in this project. We appreciate the effort and collaboration they have put in from the start and through the entire project to meet the Port’s goals.”

Prevailing winds create a negative pressure zone around the Seattle-Tacoma International Airport (SEA Airport) that used to suck noxious fumes inside the buildings every time a door opened. “We had diesel and auto exhaust from the nearby freeway, 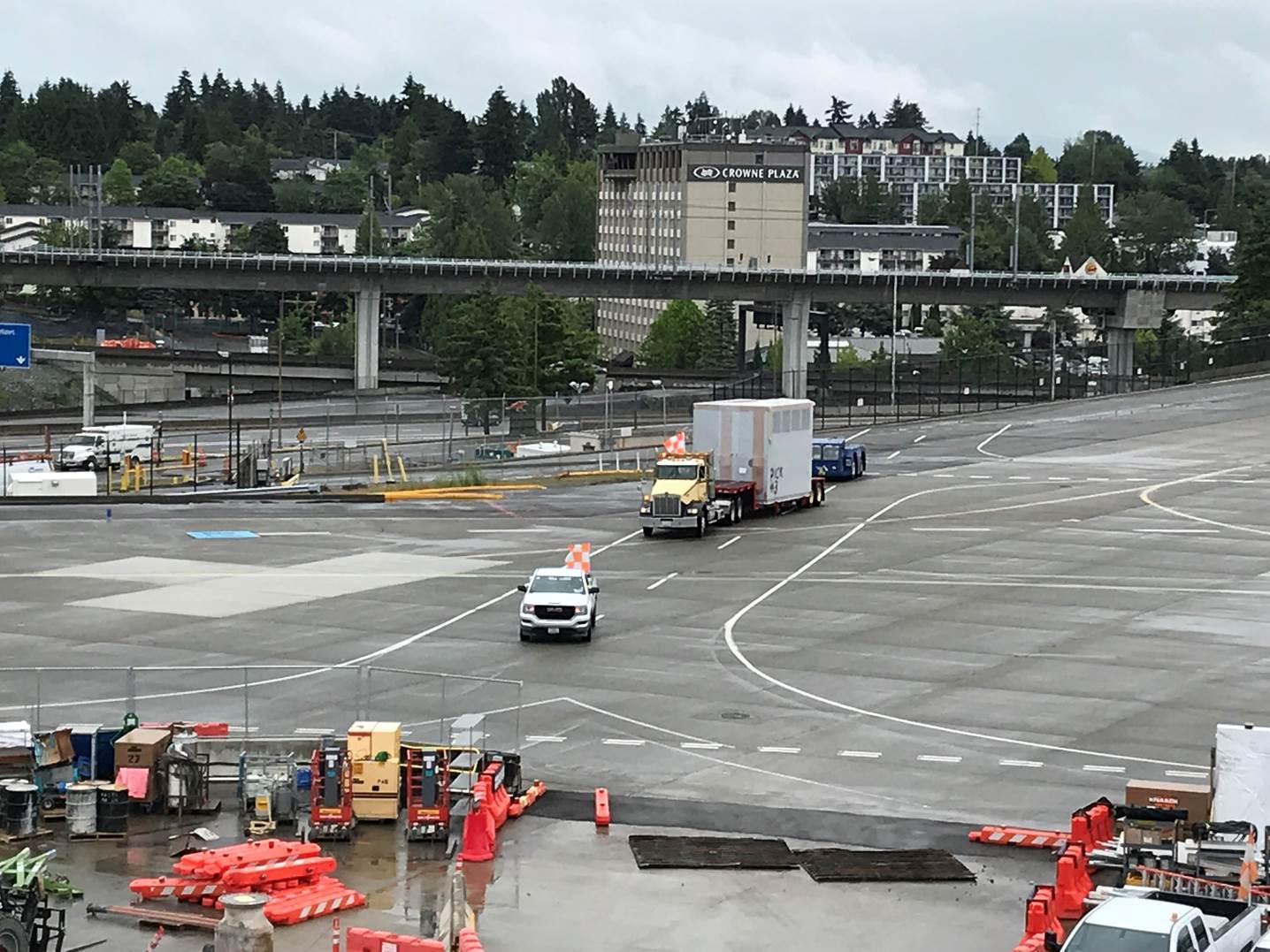 plus jet exhaust from the airport,” says Ken Warren, project manager for the Port of Seattle. “We had to improve our passenger experience.

Now SEA Airport has the highest indoor air quality of any U.S. airport. “Our air is almost hospital quality, close to the purity required for an operating room,” says Warren. “We even provide pre-conditioned air, which meets ASHRAE 181 standards, for the planes that fly out of our airport.”

SEA Airport achieved outstanding results by commissioning a study of each building to determine the best locations to bring outside air from. Then they positioned air intakes as high as possible to collect the best air available. They use MERV 13 filters in the filtration banks and custom air handlers that range up to 100,000 CFM. To counteract local winds, they blow the filtered air into the buildings as if they were balloons, pushing any fumes out.

Building for a Stronger Future

The Seattle-Tacoma International Airport serves about 50 million travelers a year. “We want passengers to have an opening-day fresh experience,” says Ken Warren, project manager for the Port of Seattle. “But that’s hard to do with 1973 infrastructure. We needed to update our aging North Satellite Building.” 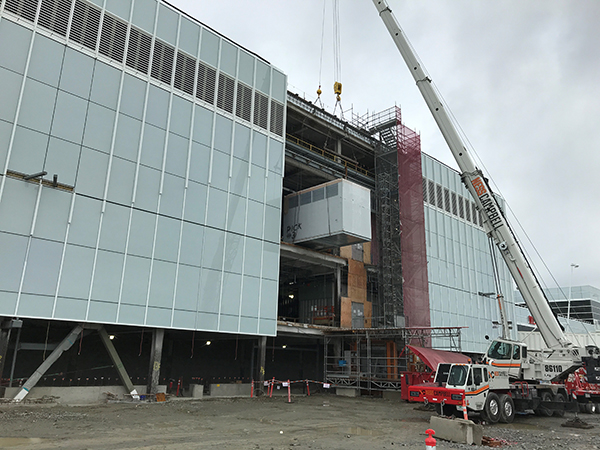 When SEA Airport was built, there was no provision to maintain the mechanical systems. For the renovation, designers prioritized practicality, like installing LED lights with occupancy sensors to avoid burning out bulbs inside air handlers. The air handlers are 4-inch wall, stainless steel construction, all fully seamed. Piping packages can be completely moved out of the way for easy access to the coils. And Port standards prohibit turning vanes in negatively pressurized ducts. “We use a commercialized toilet paper, and the paper fibers get entrained into the exhaust system,” explains Warren. “With the moisture of the Seattle climate, the fibers turned into a giant paper wad in the turning vanes, clogging the ducts up.” Turning vanes had to go.

“We are building for a minimum of 50 years, and we expect to get value for every dollar we spend,” says Warren.

Hermanson Company helped us with these details. We had no idea, for instance, that for just a little extra we would have a much better gasket, so we won’t have to worry about leaks 25 years down the line.”

“Instead of foam, we use a butyl gasket, so the duct is nice and tight,” says Dan Nugent, Hermanson project superintendent. “We’re allowed 350 CFM loss per SMACNA leak tests, but when we did the leak testing, we only lost 28 CFM.”

As part of Phase 2 of the North Satellite (NSAT) Modernization Project at SEA Airport, Hermanson installed five new, permanent Air Handler Units. The sections were trucked in across an active tarmac as 27 total sections and hoisted by a 110-ton crane through the side of the third story of the North Satellite building. Each section was 13 feet tall by 19 feet 6 inches wide and weighed between 7,800 to 14,000 pounds. The sections were maneuvered into their destination using winch and rollers over four days with an additional two days spent bolting AHU sections together. All of installations meet or exceed SMACNA standards, with adjustments for the local code. Additionally, special care was taken to ensure the whole operation met COVID-19 construction guidelines and the operation was completed without incident.

Hermanson »
Port of Seattle »
SEA Airport IN THE NEWS »