The Art of the Accelerated Construction Project

When projects get accelerated, or have to be done on short notice, state and local governments often call on SMACNA members to make it happen. 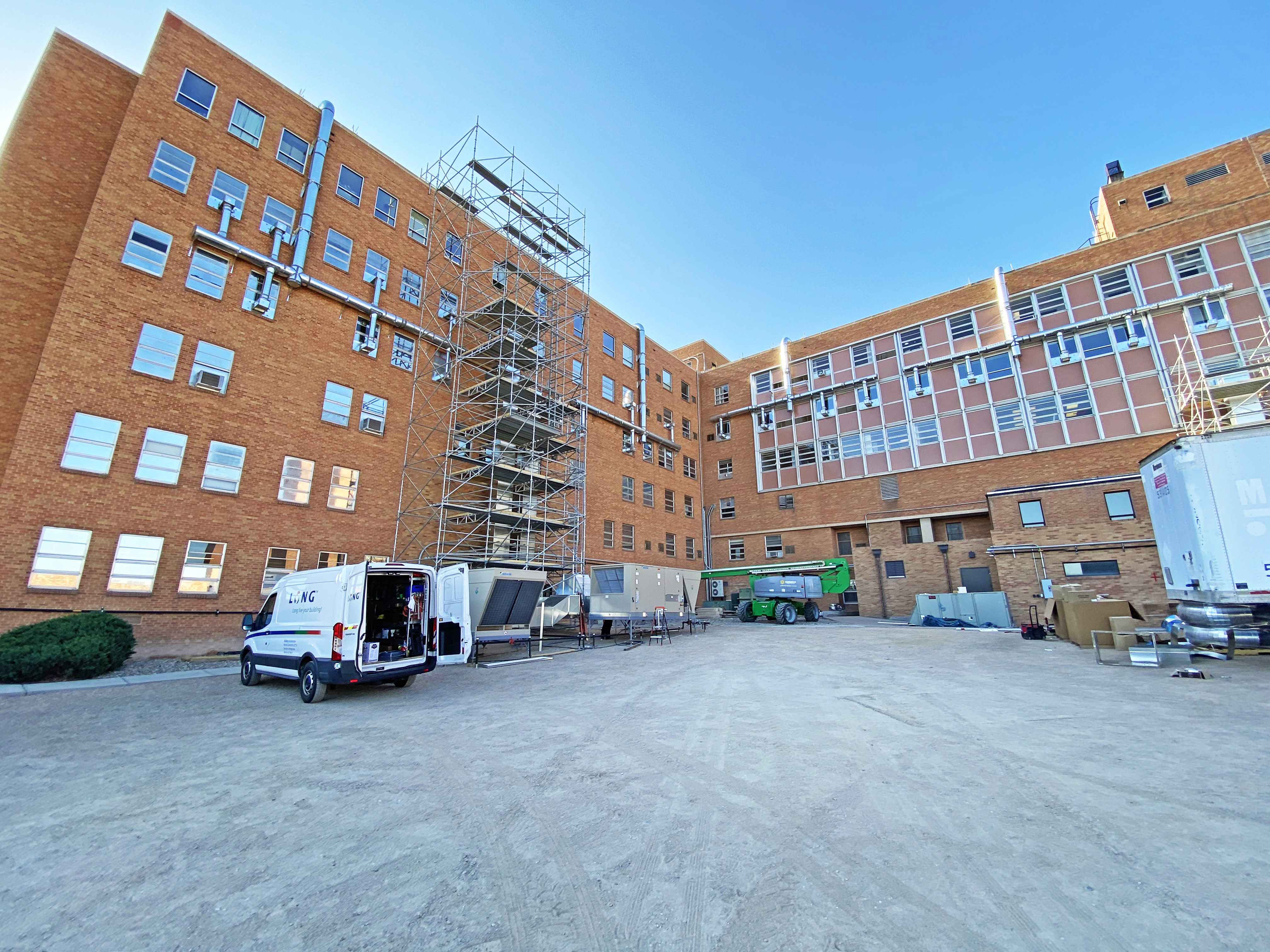 SMACNA contractors like CSM are coming up with valuable solutions to maximize negative air spaces in hospitals.

When projects get accelerated, or have to be done on short notice, state and local governments often call on SMACNA members to make it happen.

In his three decades in the mechanical construction industry, Albert Youna says he never saw more cooperation than what he witnessed while working on a recent project turning Chicago’s landmark McCormick Place convention center into a makeshift hospital for coronavirus patients.

From owners and general contractors to engineers and subcontractors, everyone worked to get this critical job for the city and region completed quickly and on budget. 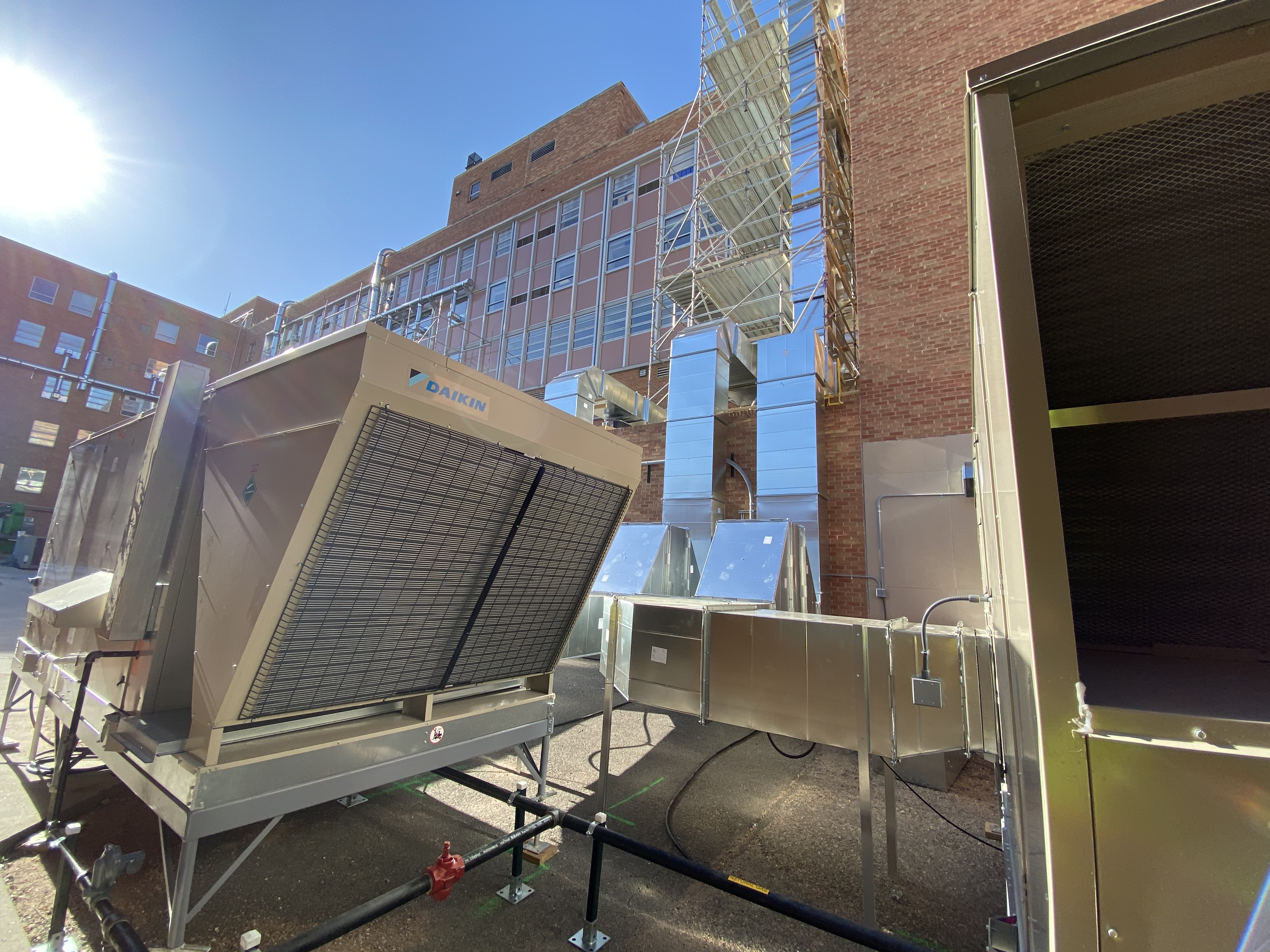 “It was just a breath of fresh air,” said Youna, who works as the president of YMI Group Inc., a full-service mechanical contractor in Elk Grove Village, Illinois. “I never experienced that level of working together and getting the job done.”

The downtown Chicago convention center is just one example of the type of COVID-19-related accelerated projects SMACNA members have been recently hired to undertake. Clients on these types of jobs — typically states or even the federal government — do not have time for the back and forth of multiple proposals and bidding that projects typically require. Resources and dependability are often more important than the lowest price. Instead of months to agree on the scope of work, there are only days — or just hours. 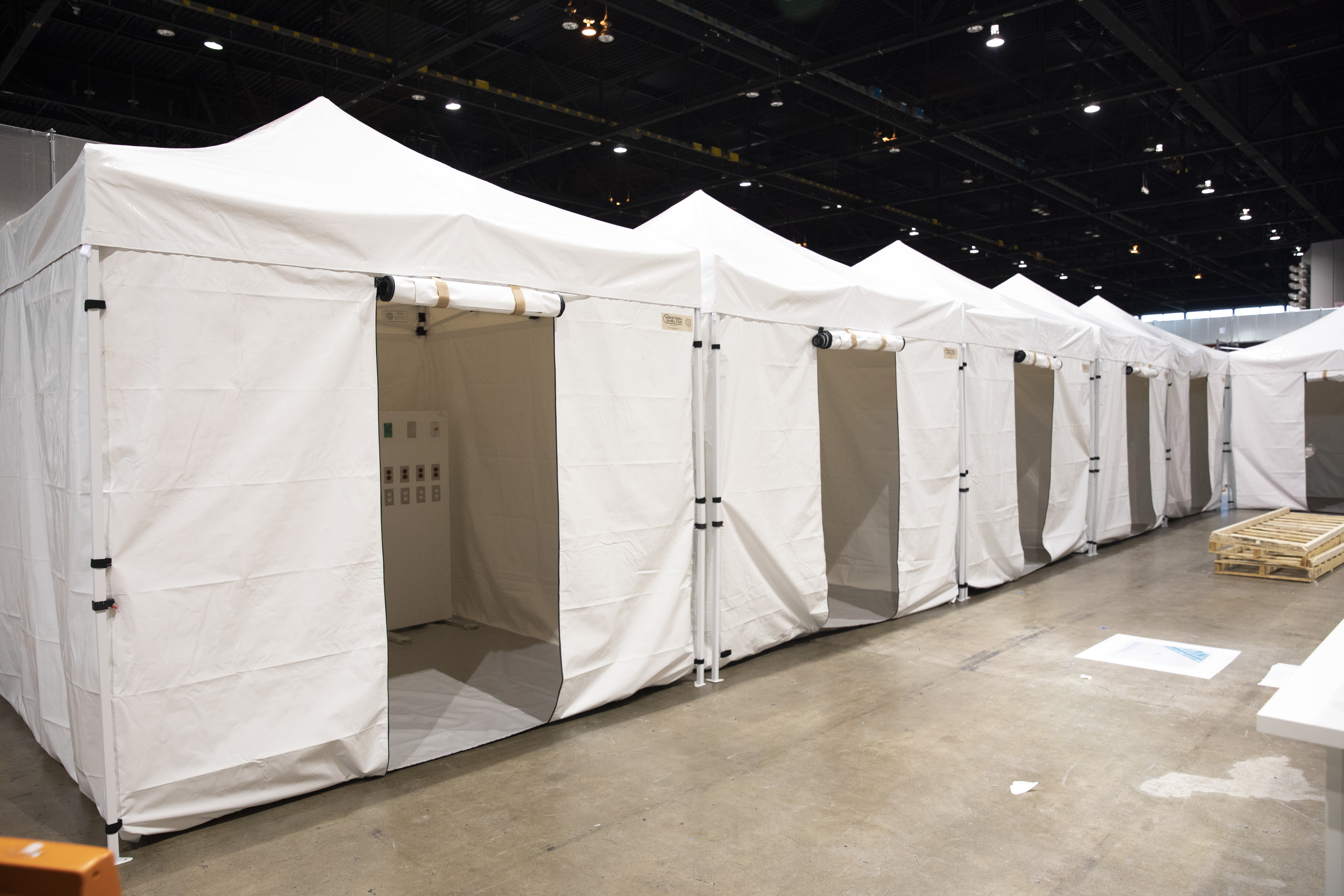 Some of the isolation tents installed at McCormick Place as part of the project of turning the conference center into an alternative care facility.

At the height of the coronavirus pandemic in the U.S., hospital systems across the country feared that the surging numbers of patients would outstrip available resources. Officials sought to quickly turn large structures such as hotels, arenas and even recently closed hospitals into temporary medical facilities for as long as the crisis lasted. Oftentimes, there were only weeks to complete the work.

That’s where SMACNA members such as Colorado Sheet Metal (CSM), CMC Sheet Metal and YMI come in. From bringing a decommissioned hospital back online to turning a conference center into a critical care complex, the work of these and other contractors has been hailed as the definition of “essential” during the crisis. And much of their work has been completed in less time than it would typically take to submit a bid.

McCormick Place: From Meeting Rooms to Medical Rooms
YMI was among the contractors hired in late March to turn McCormick Place, closed at the time due to COVID-19, into an alternate care facility that could house up to 3,000 patients. Plans called for 750 of the facility’s 3,000 beds to be in isolation tents with high-capacity oxygen, medical vacuum systems and medical air piping, as well as an HVAC system designed for negative air pressure to contain any airborne contaminants.

The projects were overseen by the U.S. Army Corps of Engineers, Metropolitan Pier and Exposition Authority (facility owners) and the Federal Emergency Management Agency (FEMA). The work required an around-the-clock schedule to meet a demanding deadline that called for the multiphase project to be completed in a month’s time. Project design and engineering services were handled by Stantec and Environmental Systems Design Inc. (ESD), with Walsh Construction as the general contractor. 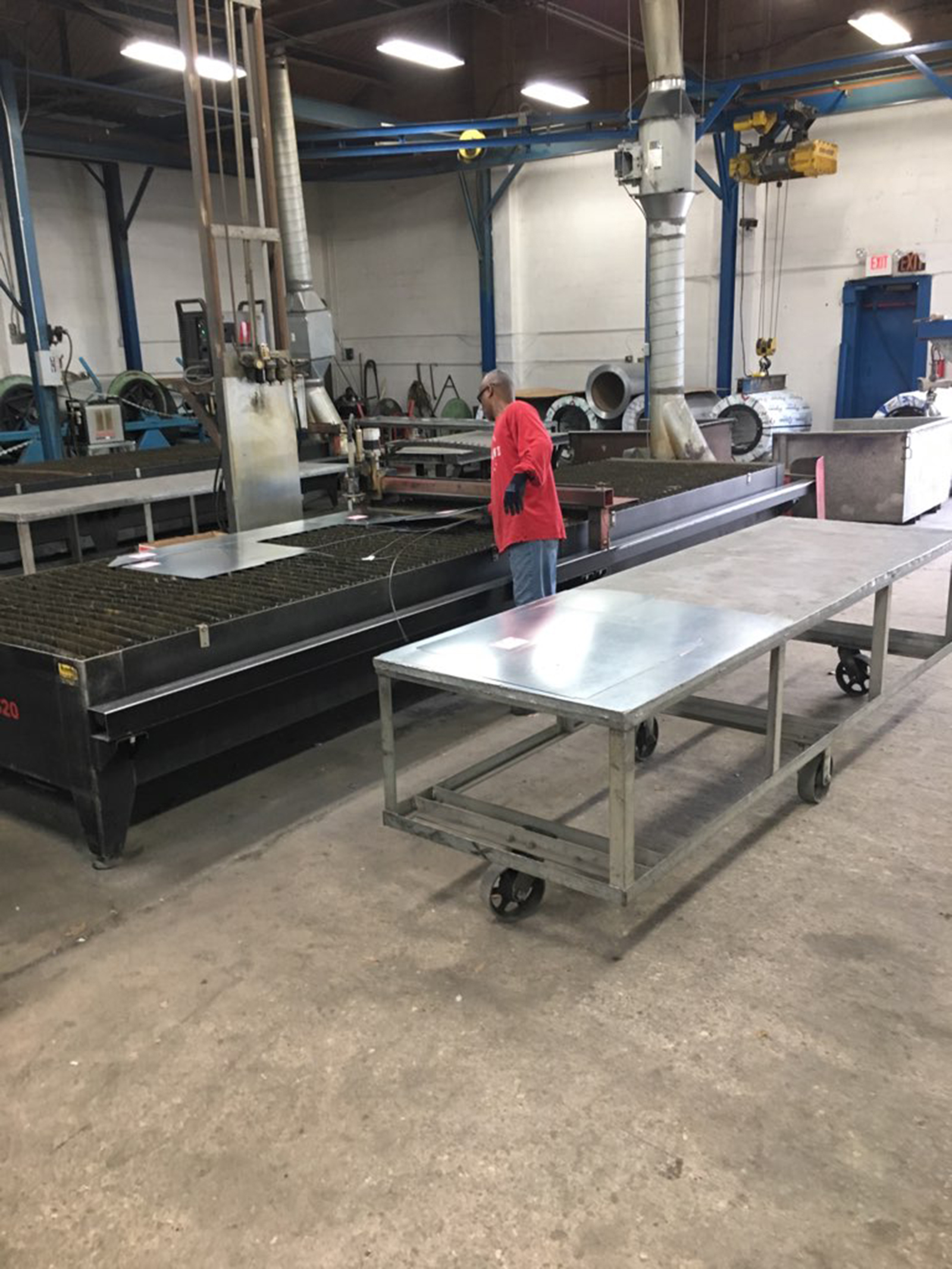 Sheet metal lies on the plasma table at CMC Sheet Metal’s shop in Capitol Heights, Maryland. The metal is to be turned into ductwork for an infectious disease unit at Meritus Medical Center in Hagerstown.

A little more than 72 hours after submitting its bid, Walsh awarded YMI the contract to install the care facility’s medical gas supply. Gases such as oxygen are critically important to patient comfort and surgical operations, since proper delivery can be a life-or-death situation for people undergoing treatment.

Working 12-hour shifts and decked in protective gear, YMI employees erected a bulk oxygen storage tank farm outside of the center, with piping and ventilation installed on a temporary scaffolding superstructure. Medical gas piping drops met with 16-foot hoses that connected to a medical headwall, sending filtered air into the isolation tents that were erected inside McCormick’s Hall B. YMI supported its field employees with an onsite office setup staffed with a project manager, design engineer, building information modeling (BIM) drafting, general superintendent and general foreman.

Youna said the typical disagreements among the trades that can slow down a project weren’t present on this job. “(Everyone) just worked wonderfully well together,” Youna said. “I didn’t hear anybody yelling or shouting. I didn’t hear anybody arguing. It was just a refreshing approach to solving the problem.”

Expanding Capacity in Maryland
When Maryland Gov. Larry Hogan ordered the state to come up with 500 additional beds to treat COVID-19 patients, CMC Sheet Metal was among those who answered that call. The Capitol Heights, Maryland, contractor was hired by mechanical firm Heffron Co. in late April as part of a still-ongoing $12.5 million project to add 20,000 square feet — and 20 beds — to the infectious containment unit at Meritus Medical Center in Hagerstown. CMC’s role was to detail, coordinate, fabricate and install the ductwork for the expansion.

“It’s pretty jam-packed, because each room is isolated,” explained Geoff Parks, CMC’s vice president of construction. “They’ve got dedicated supply, dedicated exhaust. Everything is ducted and it’s quite a bit of material up in the space.”

Parks said the emergency nature of the project meant that “as soon as we got the nod, we were working on it,” adding that CMC employees have been working overtime. “They were looking for us to produce something to clash (test) within a week.”

Despite the intensity of a critical project being built during a global pandemic, the job has been going well, Parks said. “There’s a lot of HVAC, piping, storm drains, sprinklers, med gas, conduit — just all condensed, and with social distancing and other safety precautions, it’s added a new layer,” he said. “But I think everyone has been handling it very well.”

Bringing Hospital Space Back into Service
Across the country, CSM was involved in a similar project, bringing two underused floors at a Pueblo, Colorado, hospital back to patient-ready condition to help the region prepare for a possible spike in coronavirus cases. 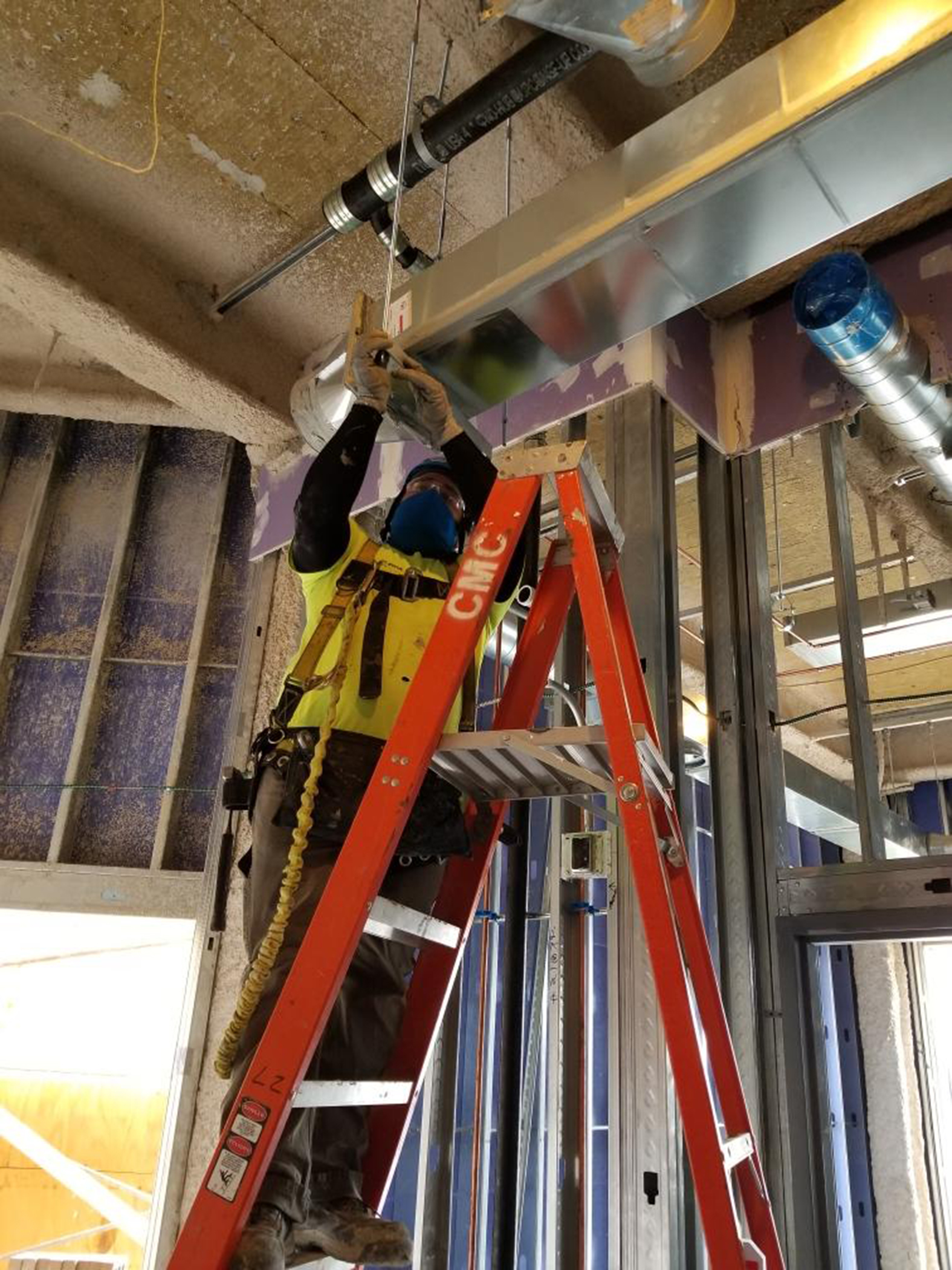 A CMC Sheet Metal worker adjusts a duct hanger at Meritus Medical Center in Maryland. CMC was hired to perform the fabrication and duct installation for the project.

Invited April 11 to bid on the project to overhaul the HVAC on the fourth and fifth floors at St. Mary-Corwin Medical Center, CSM officials had just six days to assess, design and bid, said company President Gary Venable.

The project was not a small job. Each floor was 46,000 square feet. “(The hospital) was not set up for this type of patient care,” Venable said of the isolation and negative air spaces necessary when caring for COVID-19 patients. “It was quite the undertaking.”
The design CSM came up with called for installing 18 Greenheck Fan Corp. exhaust fans on the building’s roof, then connecting them along the outside of the building through ductwork that would run down the five-story hospital’s exterior. Eight makeup-air units from Daikin would also be used with ductwork supported by scaffolding.

CSM worked with two other Colorado Springs-based SMACNA members: Mech One, which assisted with fabricating the 1,000 feet of rectangular ductwork and the 3,000 feet of spiral duct that the job required, and Midwest Test and Balance.