Even a global pandemic couldn’t sideline the construction of Allegiant Stadium, the new $2 billion home of the NFL Las Vegas Raiders and one of the most anticipated stadium projects in the Western United States.

Harris Leaves Nothing to Chance with Las Vegas Stadium

Even a global pandemic couldn’t sideline the construction of Allegiant Stadium, the new $2 billion home of the NFL Las Vegas Raiders and one of the most anticipated stadium projects in the Western United States.

While much of Nevada was closed during the spring — including the mega resorts and casinos on the Las Vegas Strip — the 65,000-seat stadium was considered an essential project and construction continued nearly around the clock to meet the summer 2020 deadline and the beginning of the NFL season. 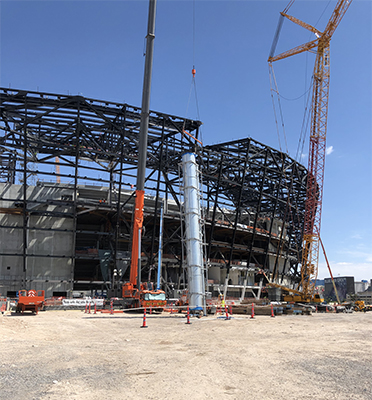 High-velocity spiral duct up to 96 inches in diameter was used as part of Allegiant Stadium’s HVAC system.

For officials with Harris Company, a large mechanical contractor with 11 offices in eight states and more than 2,000 employees, that meant nothing could be left to chance on the project, even if it was taking place in America’s gambling capital.

In 2018, Harris was awarded the $140 million contract by a joint venture of general contractors Mortenson Construction and McCarthy Construction. The scope of work included tackling the stadium’s HVAC systems, plumbing, piping, sheet metal, controls and mechanical insulation, as well as the PEX conduit that transports the draft beer and fountain soda from kegs and tanks to the concession stands and into the waiting cups of thirsty fans. 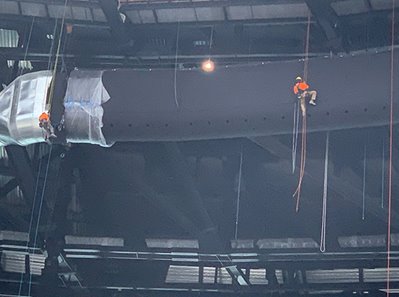 The Allegiant Stadium project required Harris Co. workers to be suspended up to185 feet in the air.

Harris has extensive experience in arena and stadium construction, having worked on U.S. Bank Stadium in Minneapolis, AT&T Center in San Antonio, and T-Mobile Arena, also in Las Vegas.

Taking Over
Coming in after another contractor had started work and failed to fulfill their obligations, Harris had quickly picked up the fumble and kept the project moving.

“The biggest challenge was just getting set up and getting the BIM built,” Mickelson said. “Seven days after I got there, we had people working in the trenches. We were constantly modeling the job and building the job at the same time.” 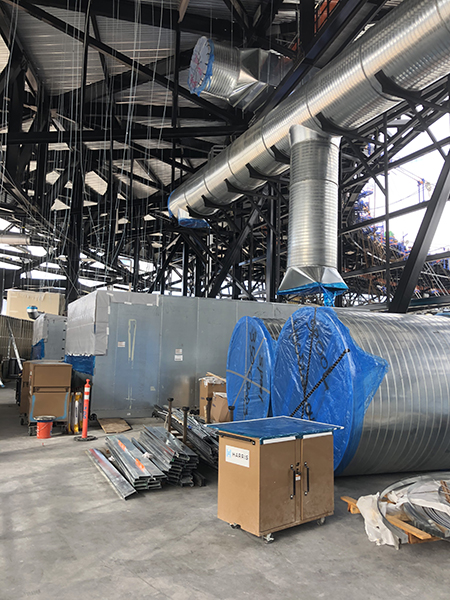 Harris had about 120 employees on site at any given time.

One of the early improvements Harris made to the Allegiant Stadium’s design was converting much of the ductwork, which had been specified as rectangular, to high-velocity spiral duct. The spiral duct was made onsite using a machine purchased by Harris specifically for the project.

Even though Harris Co.’s design shrunk the duct, it’s still quite large, Mickelson pointed out. “We had some huge, round 96-inch duct and then it transitioned into two 72-inch diameter ducts that made up the oval ducts,” he said.In total, the project used almost 1.3 million pounds of sheet metal to fabricate the ducts.

Fabric Duct a Critical Element
The design also used fabric duct from DuctSox, which was put together at ground level in 18-foot sections and then raised into place. Mickelson said he believes it’s the largest oval fabric duct ever built. The duct is near the roof and besides its use as part of the HVAC system, it’s also an architectural design element that ties into the stadium’s scoreboards.

Harris finished its work July 31, meeting the project’s tight deadline. It wasn’t easy, Mickelson said. “The schedule was a challenge. The concrete (work) finished late, the steel finished late, so that compressed our schedules to get all the mechanical systems up and functioning.”

When asked what was most interesting to him about the project, Mickelson didn’t hesitate.

“The ‘void,’” he said. “It’s an area 185 feet in the air and some huge 120-inch-diameter ductwork ties into the exterior of the building at the louver plenums and then runs through the void areas until it gets to one of the floors.” 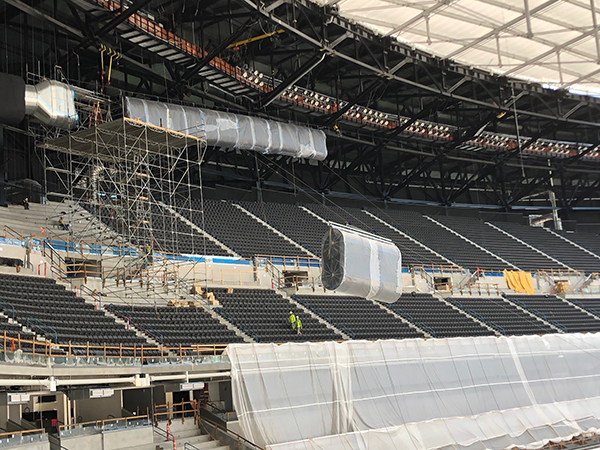 Although Allegiant Stadium hosted its first NFL football game Sept. 21, fans will have to wait a while to check out the new structure. Games are currently taking place without fans in attendance due to COVID.

Even so, Mickelson is happy with how the stadium project turned out. “When you can finish the job on time, on budget, with zero punch list items, I think that’s a pretty, pretty good win,” he said.

Allegiant Stadium at a Glance
The new $2 billion home of the NFL franchise Las Vegas Raiders has an extensive, elaborate HVAC system designed for the hot,
dry southern Nevada climate. It uses: