Welcome to 2020, a year where swirling hurricanes have competed with searing wildfires and powerful windstorms for the public’s attention in the midst of the worst global pandemic in a century. 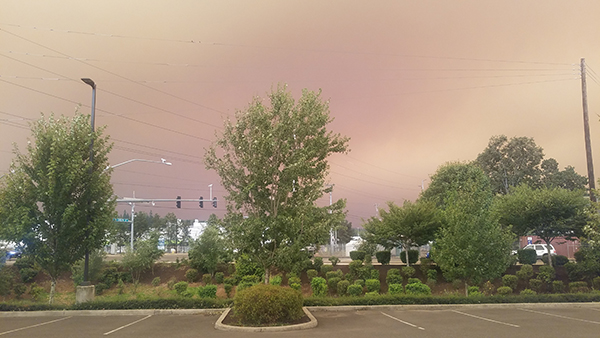 Wildfires blaze around the clock, creating a perpetual twilight outside of General Sheet Metal in Clackamas, Ore.

Is Cedar Rapids, Iowa, cursed? In June 2008, the Cedar River overflowed, flooding 10 square miles of the city, including much of its central business district.

Twelve years and two months later, a windstorm hit the city on August 10, 2020. Known as a “derecho,” the event caused torrential rain, large hail, and numerous small tornadoes in eastern Iowa and into northern Illinois. Some reports say almost every structure in the city sustained some damage.

Welcome to 2020, a year where swirling hurricanes have competed with searing wildfires and powerful windstorms for the public’s attention in the midst of the worst global pandemic in a century. SMACNA members in states such as Iowa, California and Oregon have battled everything from inland gale-force winds to air so thick with smoke that it creates a perpetual twilight. 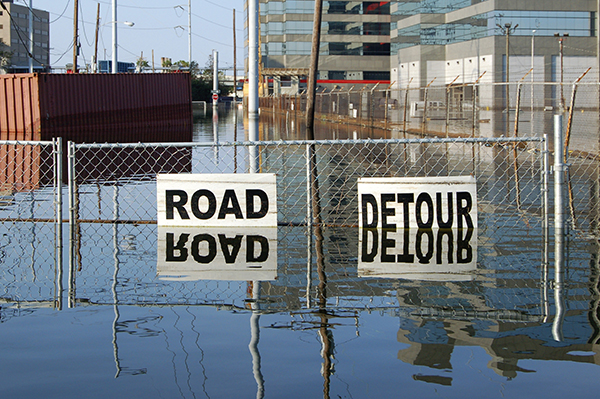 City officials said thousands of structures in Cedar Rapids were damaged, many extensively. Some say the total destruction from the storm could eclipse the $6 billion impact of the 2008 floods.

Living through the 2008 floods made Randy Novak, president of Novak Heating and Air Conditioning, a believer in the importance of insuring and planning for unexpected disasters. In that 2008 storm, the company suffered over $700,000 in uninsured damages when the shop was submerged in 10 feet of water.

But experiencing disaster once doesn’t mean Novak was prepared mentally for this year’s derecho and the damage it wreaked on Cedar Rapids.

“You do this long enough and you think you’ve seen it all,” Novak said. “If you had told me that we’re going to have this thing called a derecho, that I’ve never heard of before, that’s best described as an inland hurricane, I’d have told you that you’re crazy.”

Unlike in 2008, he said, most people and businesses have insurance that covers the windstorm damage. The problem this time is reaching a settlement on the claims.

Novak’s business was closed for over a week, with limited ability to communicate with employees or customers due to the storm knocking out landline, cellphone and internet service in much of the region.

“And then when we opened, we thought we’d go crazy and have all these man-hours,” Novak said. “But the problem was that electricity came back very slowly. It was a slow ramp up until everybody in the city got power. And now we’re as busy as I can remember.”

At Prull Mechanical, 140-mph winds snapped a 40-foot-tall walnut tree on the company’s property, sending it crashing through the roof of Prull’s 11,000-square-foot sheet metal shop and knocking out power for six days.

Employees had to improvise to keep the company going. “We ran whatever we could off a generator,” said company President Jamie Prull. 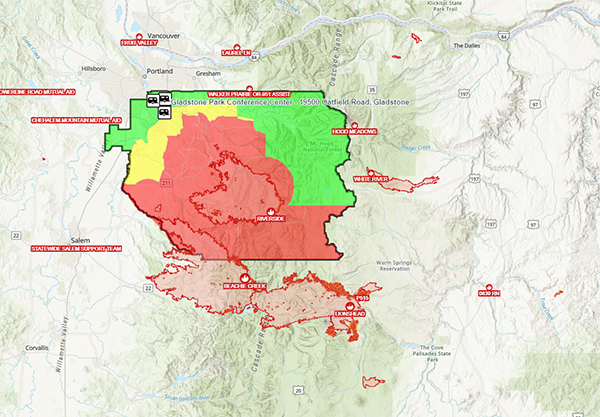 Cedar Rapids, Iowa, was hit hard by the derecho that swept through the Midwest in August.

As if the hole wasn’t bad enough, the tree indirectly caused other damage, he added. “When it went through the roof, it actually hit our sprinkler main,” Prull said. “It sprayed water on a lot of equipment.”

Prull shut off the sprinklers and employees did what they could to remove the water and salvage the equipment. “We took some damage to our burn table,” Prull said. (The tree) hit the touchscreen and ruined that. We have two Pittsburgh machines and both took substantial water. Our roller is ruined. We had a 4-foot stomp shear that got ruined.”

Altogether, the damage is estimated at over $400,000, Prull said, adding that “insurance may not cover everything,” since he only carried $250,000 worth of coverage.

It took about a week and a half to resume operations, Prull said, adding that most customers were understanding about the delays in getting crews back to work.

Fortunately, no employees were injured in the storm.

Storm-Related Injuries
The same couldn’t be said at Ilten’s Inc., a 128-year-old residential HVAC contractor that had a lot of service technicians on repair calls when the midday derecho hit.

President John Ilten said a service technician was caught when a wind gust blew into the house where he was working. “He was coming up some stairs and the door blew open and whacked him,” Ilten said. “It hit him hard enough to knock him down the stairs. He had some cracked ribs.” 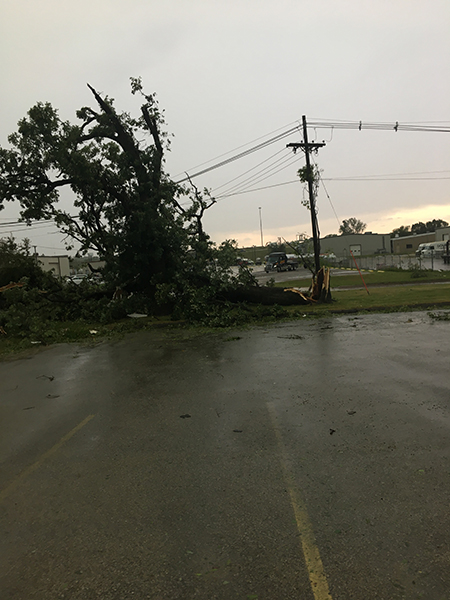 The high winds downed trees and power lines, knocking out power for days.

Apart from the injured employee, Ilten said his company was lucky it didn’t sustain as much damage as other nearby businesses. But thanks to generators purchased after the 2008 Cedar River flood, and the fact that the building still had running water, they were able to resume operations within a few days — even though landline phone service hadn’t yet been restored.

“We just started calling our answering service every five minutes for messages,” Ilten said. “We got a lot of calls. And since then, we’ve been swamped with work.”

With so many natural disasters, it’s been a busy year for insurance companies such as Federated Insurance, said Nathan Oland, a senior national account executive in the company’s Owatonna, Minn., offices.

“Our clients have been impacted by a significant number of natural disasters and extreme weather events in 2020,” Oland said. “This year, we have responded to claims arising from hurricanes along the Gulf and eastern coastlines, wildfires throughout the western United States, as well as hailstorms and tornadoes throughout the country. Our field claims team has been working tirelessly to help contractors and other business owners recover and rebuild following these devastating events.”

Wildfires Amid a Pandemic
In Clackamas, Ore., a small community about 15 miles south of Portland, Carol Duncan’s family has operated the 88-year-old mechanical and architectural specialty contractor General Sheet Metal (GSM) since 1972.

But nothing in the last 48 years prepared GSM for the challenges and changes caused by the fires that engulfed Clackamas and the state this summer.

“This is the first time in my lifetime that they’ve been this close,” said Duncan, GSM’s CEO. “Usually it’s the central Oregon area that gets the wildfires.”

The 2020 wildfire season has been one of most devastating in the state’s 161-year history.

Like Illten, in many ways, GSM has been fortunate. Despite fires coming within 20 miles of the company’s headquarters, severely impacting the area’s air quality, GSM has been able to keep operations largely intact. They were never required to evacuate, even though the region was on standby.

People are working in the sheet metal shop, although they’ve been fitted with respirators. And outdoor job sites that were temporarily closed due to the smoky air have reopened.

It helped that many GSM employees were already working from home due to the coronavirus pandemic. However, that didn’t prevent 36 of them from having to evacuate their residences. Unlike some companies, GSM had a business plan for emergencies, although Duncan acknowledged that that it’s overdue for revision.

“We had planned to do some serious contingency planning this year and then COVID hit,” she said. The aim now is to “beef it up” as soon as they can.

Even with a dated  contingency plan, the company was able to make emergency arrangements when needed. After Duncan and the rest of the executive staff found out that some employees had to leave their homes and others had lost power, they made sure employees had a comfortable place to stay, including offering them recreational vehicles provided by GSM for and opening up the company’s kitchen and showers to temporarily displaced workers.

“You go into protection mode to make sure that everyone is taken care of,” she said.

Hurricanes and a Hurried Escape
The importance of having an emergency business and evacuation plan was made plainly clear to Steve Schrieffer when his company, Atlas Blowpipe & Sheet Metal Works Inc. in Metairie, La., was decimated by Hurricane Katrina in August 2005.

Schrieffer’s company, which had never previously suffered major storm damage, had to send employees hundreds of miles away for safety while the Category 5 hurricane ravaged the region. After sheltering in Tennessee, Schrieffer returned to find his shop and all its equipment had been submerged in 4 and a half feet of water for over two weeks.

It took almost three months for the company to get back to full operations; reaching a settlement on the damage with his insurance company took about eight months.

“The final settlement was around $600,000,” Schrieffer said, adding that he thought his insurance company was fair in its dealings with him.

“We were woefully underinsured in flood (coverage), but we had good wind coverage and one of the walls in our shop blew down,” he said. “So the wind coverage picked it up. We were very fortunate.”

That fortune didn’t extend to the company’s business records, however. Schrieffer said that Atlas lost 20 years of shop drawings and other project details that were stored in filing cabinets in its first-floor offices.

If there was an upside to the disaster, it was the fact that Atlas’ services were in high demand for several years after as the city and region rebuilt.

“We were basically doing double our normal volume,” Schrieffer said. 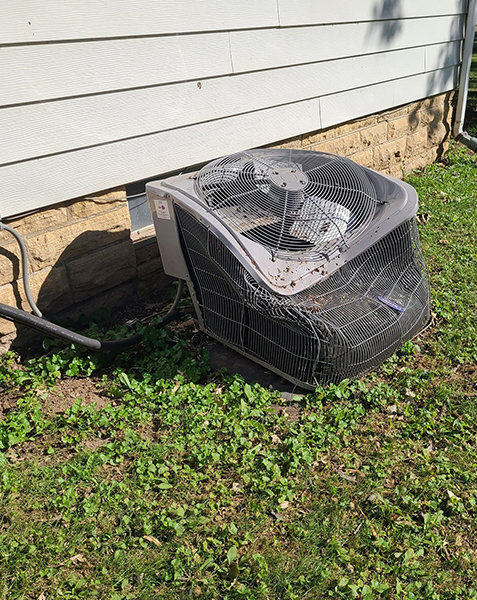 A derecho wreaked havoc in Cedar Rapids, Iowa, this summer, destroying commercial and residential property across the city.

Having gone through one of the worst storms in the last century, he has some advice for SMACNA members in other states who may face disasters in the future.“Have a plan to evacuate and have a plan to return,” Schrieffer said. Atlas didn’t have either, and he regrets it.

Federated says planning is essential to ensuring your company isn’t caught off guard if disaster strikes a business.

“We recommend developing a preparedness and recovery plan for each of the natural weather phenomena experienced in your region,” Oland said. “Some critical elements of those plans include: clear goals, a plan coordinator or team, an assessment of the business’s vulnerabilities, a written action plan, and action item checklists. A written action plan might include contact information for all employees, vendors, and customers; as well as evacuation and shelter procedures, technology and power outage processes, and backup sources for key supply chain items.”

Those are some of the steps Novak Heating has taken since the 2008 flood. Since that incident, it has replaced the physical computer servers that contained the company’s client list and records with cloud-based technology that can’t be lost due to wind or water damage. And the company regularly updates its disaster plan.

It all gives Randy Novak some confidence that his company is better prepared for whatever might happen. But, he points out, there are limits. “I don’t know how I can possibly prepare for stuff that I just don’t know is out there,” he said. “That’s the tough thing about it.”

The following was provided by SMACNA Premier Partner Federated Insurance

While businesses face different dangers depending on their region of the country, one thing is constant: Preparation is key. Coming up with a robust plan is your best strategy for helping keep your employees and your business safe in the event of a disaster.