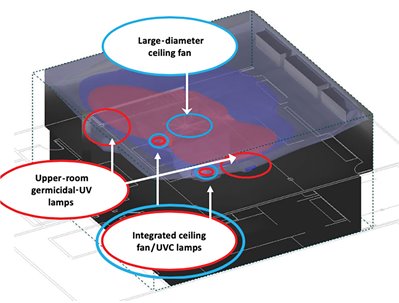 Studies show that, in spaces with limited air mixing, natural convection generated by heat gains from occupants and equipment at the floor level can reduce the effectiveness of upper-room/air UV systems. In such instances, the use of ceiling fans for air mixing has been shown to increase UV effectiveness by more than 60 percent.1

This is especially true in the case of facilities with high ceilings, where even HVAC systems with high airflow rates can struggle with air mixing and distribution. This issue is particularly problematic during the heating season, when the rate of illness among occupant populations tends to be the highest.

With ceiling fans, the volume of air that is actively cleaned in the disinfection zone is more frequently circulated back to the occupant level and replaced in the disinfection zone with air that has a higher concentration of contaminants. With continual mixing of the disinfection-zone and occupant-breathing-zone air volumes, the effectiveness of the upper-room/air system is improved, increasing the effective air-change rate. This effect reduces the concentration of contaminants in the space without the need for a three- to six-time increase in outdoor-air-change rate. Once the space air is well-mixed, additional air turnovers are not likely to increase system effectiveness.2

David Rose is applications engineering manager for Big Ass Fans. He can be contacted at info@bigassfans.com.

RESIDENTIAL: Building Based on Relationships