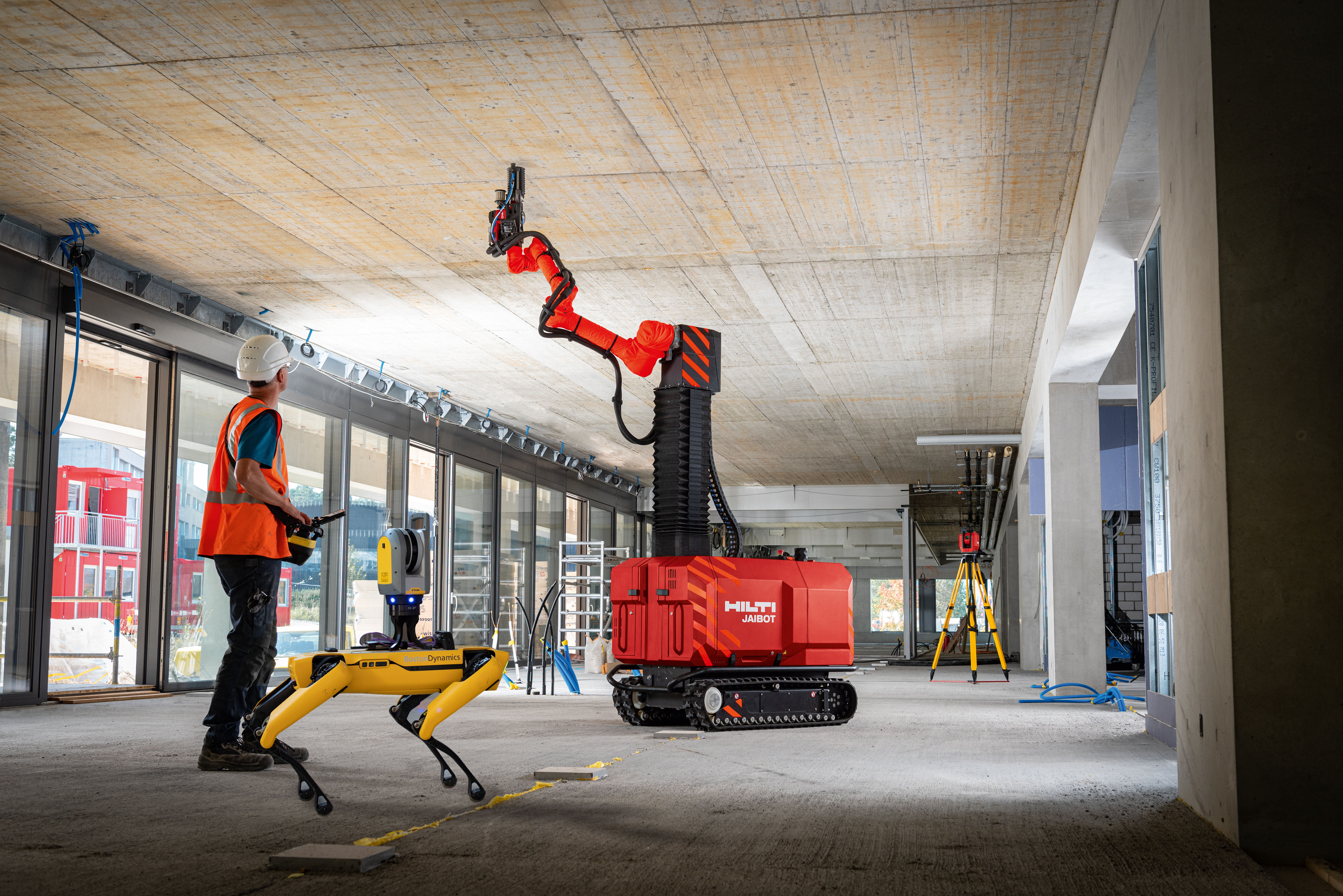 Users can program SpotTM to navigate the terrain of construction sites to collect data.

By now, many of us have seen the videos on the internet of industrial robots traversing warehouse obstacle courses like contestants on American Ninja Warrior.

By now, many of us have seen the videos on the internet of industrial robots traversing warehouse obstacle courses like contestants on American Ninja Warrior. They can scale blocks, do backflips off platforms and execute gymnastics maneuvers with aplomb. The robots can even break it down on the dance floor when the spirit moves the technicians who control them. 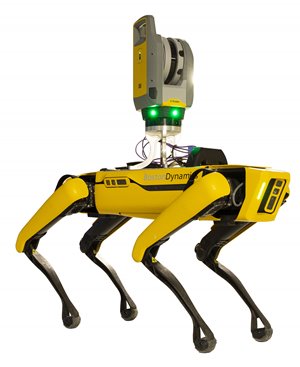 SpotTM comes equipped with imaging devices supplied by Trimble and Hilti that link up to cloud-based applications for managing construction projects.

Naturally, construction technology and software companies see these cutting-edge technologies too, and are exploring, developing and even rolling out innovative new technologies that will change the job site forever. For example, European-based construction equipment manufacturer Hilti last year unveiled Jaibot, the company’s first cobot. Hilti is billing the product as a “step toward the digitization of construction sites.”

Hilti and other construction technology companies are creating these innovative products to boost productivity, promote safety and complement the labor force.

Jaibot Is Ready to Roll
Based in Lichtenstein, Hilti operates in more than 120 counties and sells its technology and software services directly to construction contractors. The company debuted Jaibot, which it describes as a “semi-autonomous mobile ceiling-drilling robot,” in October after a development process that required “several years,” according to Aidan Maguire, the measuring business unit manager for Hilti’s North American arm.

“Jaibot as a product is done,” Maguire says. “It is an off-the-shelf robotics solution that is ready to go”, and already deployed in several jobsites in North America.

Hilti designed Jaibot for companies in the mechanical, electrical and plumbing trade. At a width of fewer than three feet, the robot doesn’t struggle to pass through doorways. Using building information modeling (BIM) data, the robot can autonomously drill and mark holes around indoor job sites. If all goes according to plan, Jaibot drills all the holes it can reach with a diameter of six feet.

Hilti doesn’t sell Jaibot commercially. Instead, the company leases the robots on either a short- or longer-term basis. When all is said and done, according to Maguire, leasing one of the machines can cost a company anywhere from $5,000 to $7,000 per week.

Human Augmentation
Maguire says construction companies are getting a “human augmentation solution” in Jaibot. In other words, it’s not fully autonomous. Hilti provides training for operating the robot and utilizing its related software. 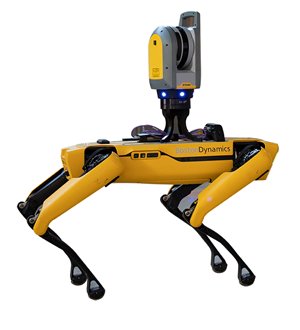 “Jaibot and the operator are really kind of a system together,” he says. “It’s not a robot that just runs out and drills.”

Fundamentally, Jaibot requires a human operator to drive its base unit, so it cannot move around a job site without the operator directing it. Operators also have responsibility for watching over the robot’s arm while it’s working.

Additionally, operators are needed to shift course on the fly. If the robot hits a piece of rebar while drilling, for example, that necessitates giving it new directions. Similarly, operators can stop the robot from venturing into areas of the job site where it shouldn’t go.

Safety and Productivity Are Key
Supporting the health and safety of workers on job sites stands out as one of Jaibot’s most important benefits. Specifically, it can save workers from hours of repetitive activities that are physically strenuous, including drilling countless numbers of holes overhead.

“All contractors can agree it’s safer to have a robot arm doing the drilling than have workers going up and down ladders or scissor lifts and reducing fatigue and stress on the installers’ joints as they work overhead,” Maguire says. 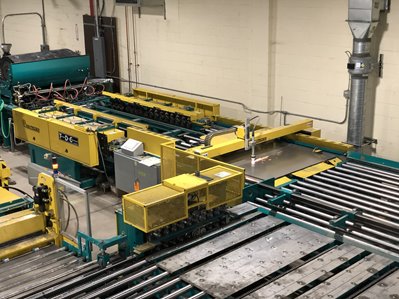 Furthermore, construction companies can realize productivity gains by deploying Jaibot effectively. The machine’s precision cuts down on layout and drilling errors and helps ensure a constant and consistent level of performance. Meanwhile, Jaibot can execute its tasks at a faster speed and with greater transparency thanks to its integration with BIM data.

Maguire says Hilti’s internal research shows the productivity increases from using Jaibot over more traditional methods of drilling are significant. A two-person team may have the capacity to drill between 70 and 100 holes in a day on a construction site. Jaibot has completed upwards of 700 holes in a day, and Maguire says that number could climb higher if used as part of a project managed specifically with the cobot in mind. 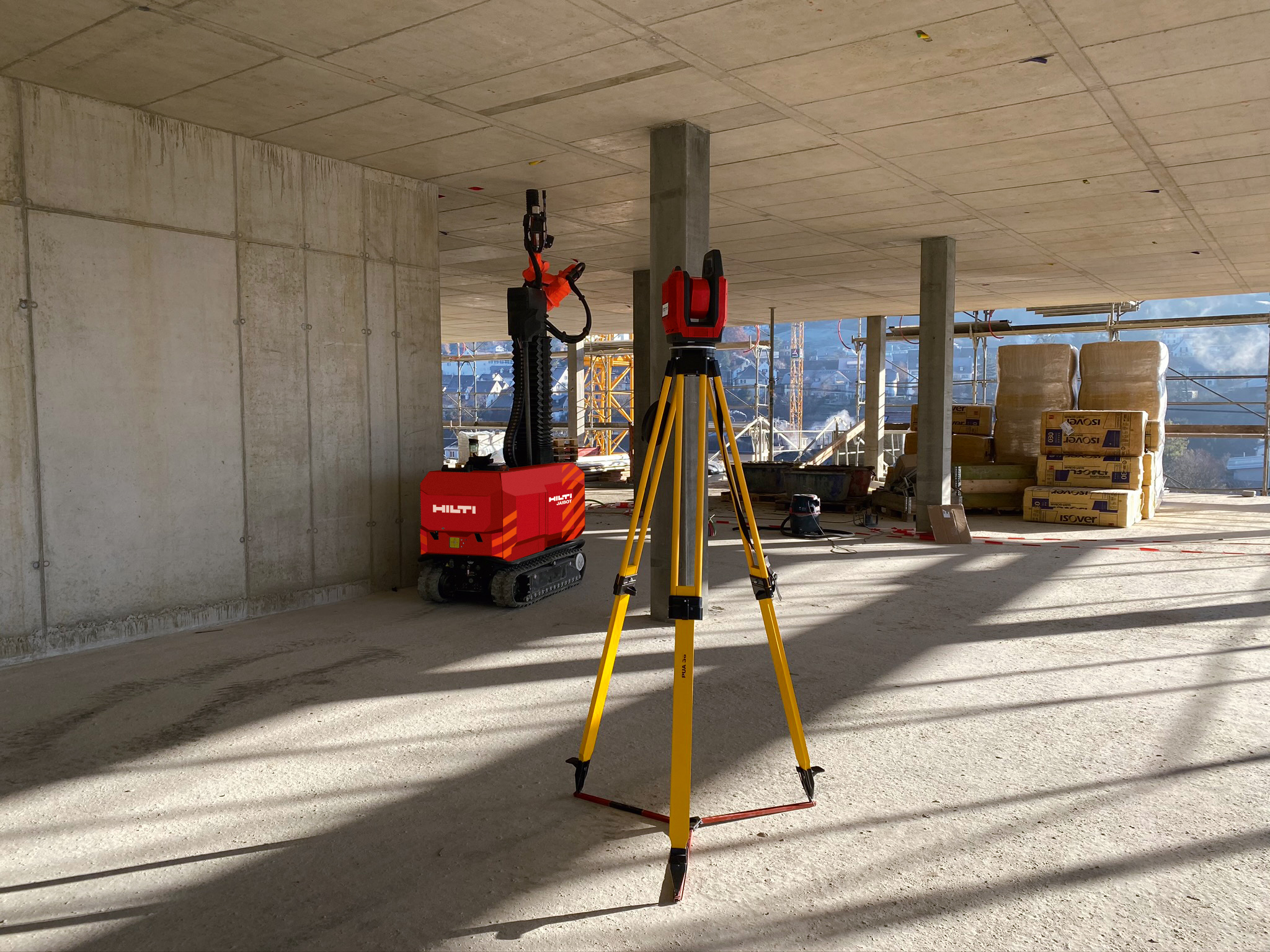 A two-person team may have the capacity to drill between 70 and 100 holes a day on a construction site. Jaibot can drill upwards of 700 holes in a day.

Users can program Spot to navigate the terrain of construction sites to collect data. That enables contractors to evaluate the status of its projects, such as which tasks have been completed and what work remains outstanding. They can also use the robot to support routine activities around job sites. Meanwhile, the robot can capture data in a consistent fashion and transmit its findings to a cloud application for real-time analysis.

Spot can carry and power about 30 pounds of inspection equipment. In addition to Spot’s base Explorer model, customers can purchase an upgraded model known as the Enterprise. The Spot Explorer can cover up to 1,000 meters on its autonomous missions, while the Enterprise has no limits on the length of its missions.

According to David Burczyk, construction robotics lead at Trimble, the goal is for a crew to show up on the job site with a report on the status of the project automatically prepared and waiting for them. In that sense, Spot functions as a “co-bot,” helping workers augment their own productivity.

“Spot can do more mundane and repetitive tasks on a frequent basis,” Burczyk says. “The early adopters are using it for quality control and documenting site conditions, but it could become part of their facilities management down the line.”

Meanwhile, Massachusetts-based Mestek Inc., which operates a family of 45 manufacturers of HVAC equipment and building envelope products, is focusing on the technology needed for prefabrication of duct work. Mike Bailey, Mestek’s senior vice president of sales, says Mestek’s IPI Pro Fabriduct with full-width in-line plasma cutting system is one of its most promising technologies. It has the ability to accept computer-aided manufacturing code via computer-aided drawing downloads to produce sheet metal cutouts.

Installation of the IPI Pro Fabriduct with full-width in-line plasma cutting capabilities takes about two weeks, according to Bailey. Bailey describes the interface between the technology and software and BIM applications as “pretty seamless.” Overall, he says the plasma cutter enables contractors to work more efficiently largely due to its ability to cut down on errors in the prefab stage.

As the demands of the construction contractors continue to evolve, expect those same recurring themes of efficiency, precision and safety to continue driving the technological innovations that serve them.

“Less input, greater output, less chance of error — all while producing a better deliverable for the field,” Bailey says.