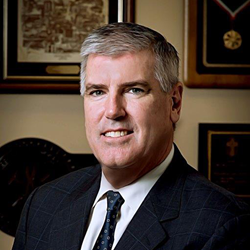 Joseph Sellers, Jr., is SMART’s General President, first elected on May 1, 2015 and unanimously re-elected in August of 2019. A second-generation sheet metal worker, Sellers began his apprenticeship in 1980 at Local 19 in Philadelphia and became a journeyman four years later.

Sellers was elected to the local’s Executive Board in 1994 and appointed to be Training Coordinator in 1996. In 2002, after serving as a Business Representative for two years, he became Local 19’s President and Business Manager. In August 2009, Sellers was elected to the international leadership as 11th General Vice President. The General Executive Council elected him to serve as the union’s General Secretary-Treasurer (GST) in July 2011, and he was unanimously re-elected as GST by delegates to the first SMART General Convention in August 2014.

Sellers implemented and continues to lead enhancements to the Union’s information technology, professional skills training, and lifelong learning curricula. Additionally, he has held several positions with the AFL-CIO and North American Building and Construction Trades Union at the national, state, and local levels.

This year will be different in many respects, and we encourage you to check the FAQ listed on the Annual Convention page for COVID-19 updates on travel to Hawaii.
More