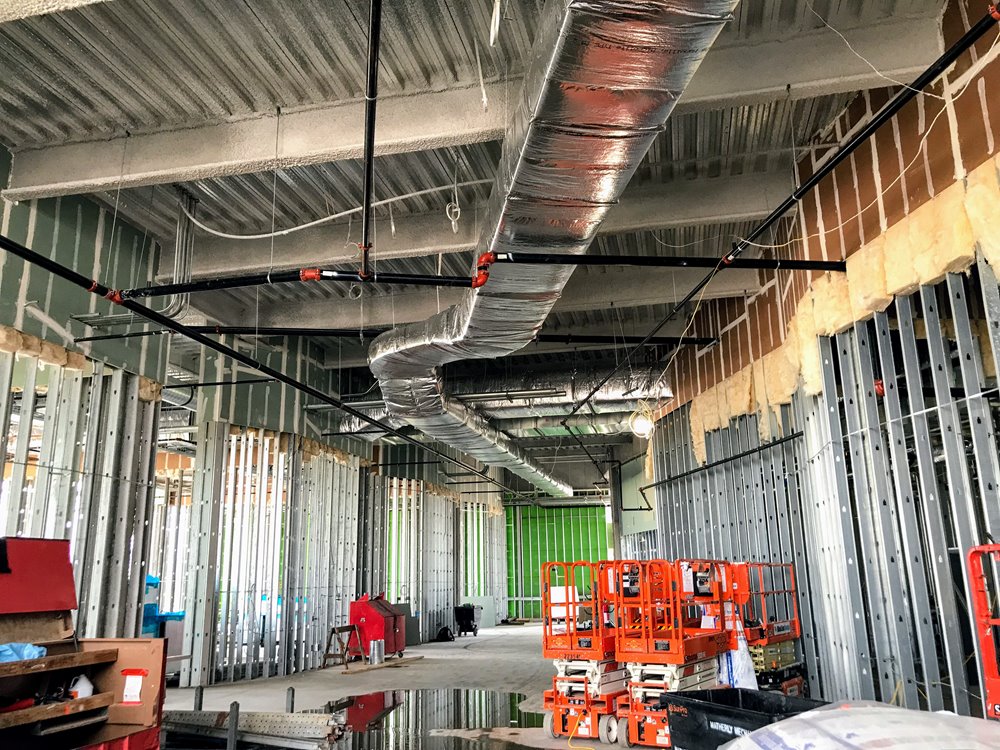 Fast Track to Success in ‘The Big Friendly’

The $275 million dollar project was already on an accelerated 24-month construction schedule when record-breaking storms hit the state. With dangerous flooding east of Oklahoma City, severe weather has impacted construction across the Sooner State.

“There have been constant weather delays. It’s a muddy mess,” said Mike Clark, vice president of sheet metal at Matherly Mechanical Contractors LLC of Midwest City, Oklahoma. “We wear rubber boots and work around the water and mud.”

Matherly is fabricating and installing about one million pounds of large G-90 galvanized ductwork for this HVAC project. The largest rectangular supply and return duct is 144 inches by 40 inches with 88-inch round returns and 66-inch round double wall duct.

Matherly Mechanical is installing nine air handling units (AHUs) on the rooftop and another 20 AHUs on the mezzanine level. The mezzanine AHUs have to be in place before the steel workers close off each sector of the building. “It’s like building a boat in a basement,” Clark noted. “Once the steel workers move out, there won’t be a chance to get in there again.”

Matherly has been cooperating closely with the other trades to meet the schedule and on the challenging weather conditions. To streamline construction, the site has been divided into modules or sectors.

“They are still pouring concrete and building out steel in some sectors, while we install the HVAC system in others,” Clark explained. “In fact, almost every craft is working simultaneously, with sheet metal workers, steel workers, framers, roofers and plumbers. There are usually several hundred people here at a time. When the weather’s dry, finding parking on-site is a challenge.” 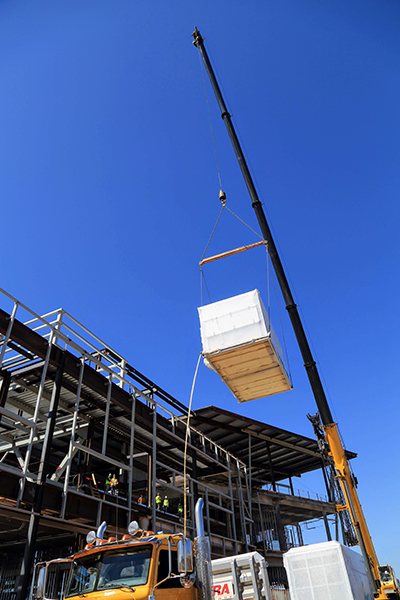 Matherly Mechanical is hoisting their equipment to the roof using 350-ton lattice boom mobile cranes, which are particularly vulnerable to high winds and thunderstorms. “With 300 feet of stick in the air, the cranes are lightning rods,” Clark noted. To take pressure off the already-busy cranes, Matherly is using off-peak hours hoisting. Every few weeks, the sheet metal team will work in the evenings from 5 p.m. to 8:30 p.m. to help lift the air handling units into position on the roof and mezzanine.

The design firm of Populous America in Kansas City, Missouri, is the architect that designed the convention center and Henderson engineers of Lexena, Kansas, is the MEP engineer.

“They have provided one of the best sets of drawings we’ve seen in years,” Clark said. And the detailed drawings have provided another way to save time. Early in construction, Clark obtained the complete building information model (BIM), which he loaded into a total layout system. The data is transmitted to a tripod that precisely marks each hanger point.

“Rather than physically chalking out a line, the workers roll the layout system tripod to the correct location. The tripod indicates each hanger point with a laser so our team can mark it,” Clark said. The total layout system is especially efficient in a wet, crowded work site because the tripod can roll past craftspersons, equipment and water that a chalk line would run into.

Currently about one-third of the way into construction, Matherly has 15 sheet metal workers on-site and another 18 workers fabricating ductwork in the shop. Clark expects the number on-site to double as construction progresses.

“When we hit the 200,000-square-foot exhibit hall, we may have up to 30 sheet metal workers using 50-foot scissor and boom lifts to get to the top of the 51-foot high space,” he concluded. “Sheet metal workers will be there to the end of the project.”

Presidents Column: Building on Innovation to Advance Our Business