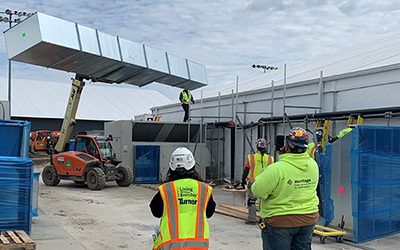 The main supply air duct for tent No. 2 is lifted into position.

According to Jeff Porrello, the president and CEO of Heritage Mechanical Services, a New York City-area contracting company, its work on an emergency COVID-19 facility was more than just another project to him and his staff.

Employees at the full-service mechanical contractor in Farmingdale, New York, 40 miles east of the epicenter of the COVID-19 outbreak in the U.S. — know plenty of people who have been affected by the virus. Too many, according to Porrello.

“It’s very, very personal,” he said. “My father passed away on April 9 from COVID. My dad had been around this company for a long time. A lot of the senior, and even the younger staff, knew him. It was tough.”

Despite those kinds of emotional setbacks, and even a few employees who caught and have since recovered from coronavirus, Porrello and the rest of the staff at Heritage Mechanical are working on critical infrastructure projects to help the region cope, if not conquer the illness.

The company recently completed its work on a 1,000-bed temporary hospital erected by the U.S. Army Corps of Engineers at Stony Brook University’s Long Island campus. The tent hospital project, along with another in Old Westbury, New York, is part of an effort by state and federal officials to increase the number of hospital beds available to treat COVID-19 and non-coronavirus patients in the region displaced by all the beds required by Coronavirus patients.

The temporary medical facility comprises five military-style field tents, with a 44-unit HVAC system designed by local MEP engineering firm Jaros, Baum and Bolles to isolate the most contagious patients from others in the hospital. Each unit produces up to 18,000 cfm.

A Tight Timetable
Working under a large, well-known New York City-based general contractor, Turner Construction Co., Heritage was given just 21 days to fabricate and install 210,000 pounds of 18-gauge, rectangular, lined ductwork for the makeshift hospital which incorporates X tents in a compound-like setting. Work began March 29. More than 100 Heritage Mechanical employees were involved in the project. 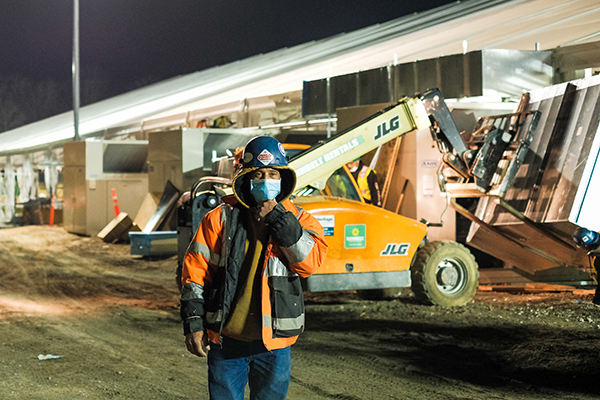 Heritage night shift foreman Steve Zambryski wears a protective mask at all times while working on the job site.

“We’ve been in some interesting builds over the course of my career, and this is probably one of the most difficult, basically because of the timeframe,” Porrello said. Meeting that kind of tight timetable required 12-hour days at the Heritage’s sheet metal shop in Farmingdale, and working well into the night at the construction site. Also making duct for the project were SMACNA members Eastern Sheet Metal and FRP Sheet Metal, both of Long Island. The first shipment of ductwork arrived April 6.

As a design-build project on an emergency schedule, Porrello said the facility was literally being designed as it was being built.

The New York region’s early spring weather didn’t help the schedule. Three days of rain and wind gusts of over 30 miles per hour threatened to delay the project.

“It got really cold at night,” Porrello said. “One day, they shut the site down. It was just dangerous. We had 70-mile-per-hour gusts, and they didn’t know what was going to happen with the tents.”

Staying Safe, Staying Healthy
Looming over the project, even more than the storm clouds, was the threat of COVID-19 infection. Being from the New York area, every employee understood the dangers of contracting the highly contagious virus. Heritage took extensive precautions, including checking the temperature of everyone at the job site before the start of every shift, mandating social distancing and the use of protective gear. 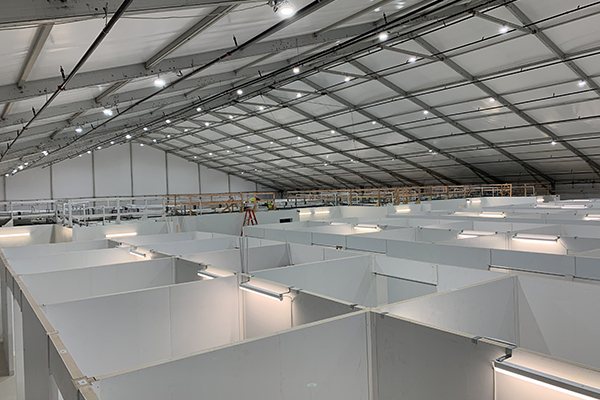 As a member of the EMCOR Group, Porrello said Heritage was always able to secure the masks and other personal protective equipment workers needed.
“We have a distinct advantage being an EMCOR company,” he said. “National purchasing helps in securing masks, sanitizer, everything that we need.”

Even with those precautions, several employees requested not to work on the project, Porrello acknowledged.

"I mean, you can’t make them do it. And I understand exactly how they feel,” he added. “Just about everybody in Suffolk County (where Heritage is located) has been impacted one way or another” by the virus.

Despite the challenges, Heritage met its deadlines and the Stony Brook facility admitted its first patients at the end of April.

“The workers did a great job,” Porrello said. “It was a monumental undertaking. I’m really proud of these employees for what they have done, and in a time period that would have been difficult for a lot of people.”