Completed installation of cleanroom manufacturing space, with adjacent storage, and mechanical mezzanine above. 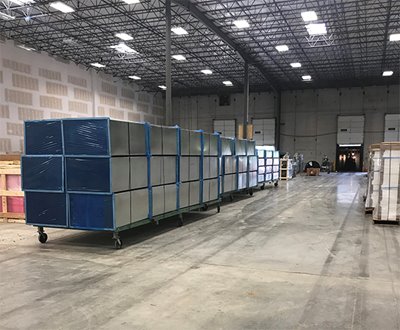 In the midst of a global pandemic, construction industry hygiene practices have taken on added importance.

Regular handwashing and the constant disinfection of high-touch surfaces is now as routine as the use of masks and other safety gear in the shop and on work sites. And while that level of attention to cleanliness may not have been around all to long, there’s an HVAC specialty segment where it’s always been important: clean room design.

Laboratory clean rooms — so named because they’re engineered to have ultra-low levels of dust, airborne contaminants and other particles — are widely used in the manufacture of computer microchips, high-definition flat screen displays and pharmaceuticals. Workers in these spaces may wear special suits, gloves and masks that protect against contamination from external sources in the environment. 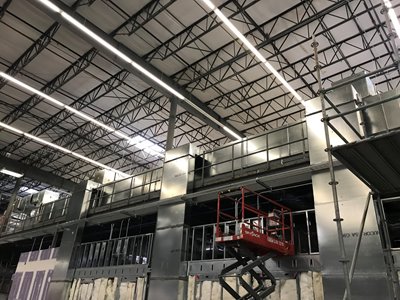 Because of the unique filtration and climate control requirements of clean rooms, not every contractor has the expertise to work on such projects. Sheet metal and HVAC companies that specialize in clean room construction, however, can find their services in high demand.

The urgent need to increase the number of facilities for quick coronavirus testing led to a recent clean room project for Barnes & Dodge.

In spring 2020, the company was hired to quickly erect three clean rooms inside a 120,000-square-foot cross-dock warehouse in Lenexa. The building’s occupant, Thermo Fisher Scientific, had recently been awarded a federal contract to manufacture “viral transport media (VTM),” which are used by hospitals and other coronavirus testing sites to safely collect and move the cotton swabs used for COVID-19 samples.

The government contract called for Thermo Fisher to increase its VTM production from 50,000 units a week up to 8 million units a week, which is why the company needed the hyper-hygienic environments. Each clean room was to contain four production lines.

The whole project was worth about $40 million. Barnes & Dodge started work in June with a target end date about two months later.

Andy Phelps, P.E., a vice president of Barnes & Dodge, was one of the project managers for the Thermo Fisher clean room project. The company was responsible for putting HVAC system in the clean room also known as the “air side” of the building, Phelps said.

“Our team installed all the ductwork, all the dampers, set the air-handling units, installed the HEPA (high-efficiency particulate air) filter modules that maintain those clean room environments,”  he said.

With government officials eager to get accurate estimates on the number of COVID-19 cases in the U.S., the VTM project was fast-tracked. Plans were finalized only a few weeks before Barnes & Dodge started working on-site, Phelps said.

Tight Timetables
“The design team only started designing the project probably about three weeks before we started work out in the field,” he said. “So there was really no downtime or time for the architect and engineer to do traditional prep work.”

For Barnes & Dodge, that meant the company had to work hard and staff the project correctly to keep on the aggressive schedule. There were no shortcuts available to them. “I wish there was some super cool software out there” that makes things easier, Phelps said. “It really came down to just having enough people, both in the office and in the field to make sure that this thing kept on track. It was really, truly that fast paced.”

Despite the tight timetable, Barnes & Doge did detail work on the ductwork and accessories using 3D design and building information modeling (BIM) for installing the HVAC system, Phelps said, although there was no formal BIM coordination.

“We did utilize that technology to make sure that things were in the right spaces (and) that we weren’t going to run into any major issues in the field,” he said. “And the good news is everybody had enough overhead space to actually get everything to fit without too many major issues.”

Sheet metal fabrication was handled at the company’s Lenexa shop. Because the duct was being put into clean rooms that would be free of contaminants, Phelps said sheet metal workers had to follow certain protocols.

Cleanliness
“We made sure it was in a clean condition, capped the ends of the duct and shipped it over,” he said.
Some of the ductwork for the clean rooms left the shop in lengths up to 20 feet long. Such large pieces were prefabricated and stored on aluminum skids so they could be set into place.

“We were able to do a significant amount of prefabrication on this project and put it out in the field, which definitely helped with all the work we had to do,” he said.

Most of the duct for the project was rectangular, with spiral duct being used when running out to the HEPA diffusers. The installed ductwork for the clean rooms used an estimated 51,500 square feet of sheet metal, which weighed about 72,000 pounds.

The ducts tie into 25 air-handling units, which generate 163,000 cfm of airflow.

While fabrication and installation was underway, the deadline that Thermo Scientific had for the project was constantly on Phelps’ mind.

“I think ‘demanding’ doesn’t even begin to describe how quickly they wanted things done,” he said. “That was the biggest hurdle that we had. We were able to stay on top of production as far as getting the ductwork into the field. Obviously we had a lot of overtime, both in the shop and in the field, where people were working seven days a week, as well at certain points of the project working multiple shifts.”

Barnes & Dodge met its deadline. A grand opening ceremony for the completed Thermo Fisher Scientific facility took place in August 2020. It was attended by Kansas Gov. Laura Kelly and other local officials. The plant is expected to eventually employ 600 people. At the ceremony, Gianluca Pettiti, senior vice president and president of Thermo Fisher’s specialty diagnostics business, praised the work of those involved in the plant’s construction.

“Thermo Fisher is proud to support virtually every aspect of the global COVID-19 response and our colleagues in Lenexa have played a key role in those efforts,” Pettiti said. “Thanks to their hard work, Lenexa significantly increased production of VTM units. The team has worked with unrelenting intensity to build out and open a new site in just about six weeks. They understood the urgent national need, accepted the challenge and have delivered for the American people.”