While not likely to be a record, the HVAC and sheet metal industry should see steady demand for residential services, experts say. 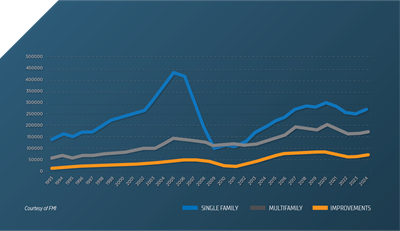 While not likely to be a record, the HVAC and sheet metal industry should see steady demand for residential services, experts say.

After an unexpectedly strong 2020, where the U.S. housing market saw titanic shifts in consumer housing preferences, the market largely brushed off any fears about the economic impact of COVID-19, and continues to set a pace for 2021 to be another solid year for residential construction.

That’s the opinion of economists and analysts with groups such as the National Association of Home Builders (NAHB), FMI Corp. and Dodge Data & Analytics. The pandemic renewed public appreciation for the charms of quiet, spacious suburban living over the noise and excitement of bustling downtowns, these experts say. Plus, the switch to working from home during the pandemic concentrated homeowner attention on convenience, comfort and safety of their own HVAC systems.

This heightened awareness of the importance of indoor air quality means SMACNA members involved in residential HVAC should find work plentiful for the year ahead, analysts said, although any unexpected setback in efforts to control the pandemic could change these predictions.

After the global pandemic shut down much of the world’s economy last March, Richard Branch, chief economist for Massachusetts-based Dodge Data & Analytics, didn’t expect residential construction to be so resilient.
“Single-family (construction) in 2020 had a phenomenal year,” Branch said. In the fourth quarter alone, about 1.1 million units broke ground — the highest figures since 2006–2007, the height of the early 2000s housing boom.
Overall, single-family construction in 2020 shot up 14% year-over-year, according to Branch. He expects more sector growth in 2021, but at a more modest 5% level.

Accelerating Growth, CBO Says
Meanwhile, the rest of the U.S. economy should continue the recovery that started late last summer after strict lockdowns to control the pandemic began to ease.

A report released Feb. 1 by the nonpartisan Congressional Budget Office predicts that the economy will grow 4.6% this year, fueled in part by a decline in the number of coronavirus cases and the related need for extensive social distancing.

The rebounding economy should be exciting news for contractors like Welsch Heating & Cooling Co., in St. Louis. But company President George “Butch” Welsch said it would be tough for this year to beat 2020.

“It was the best year in our company’s history,” he said, adding, “I’m almost embarrassed to tell people about it, to be honest with you.”

Hot Summers Help
The combination of a typically hot St. Louis summer combined with many people working from home for the first time created strong demand for the 126-year-old residential company’s services.

“With people staying home, their desire and need to have proper air conditioning in their homes became a bigger and bigger factor,” he said. Many realized that their existing single-zone HVAC systems weren’t able to sufficiently cool upstairs makeshift offices.

Welsch answered over 17,000 service calls and performed more than 1,000 installations in 2020.
“Our prediction is that while we may not surpass last year because it was as good as it was, we will be close to it,” he said.

Economist Optimistic but Cautious
Danushka Nanayakkara-Skillington is the assistant vice president for forecasting and analysis at the National Association of Home Builders. She said her organization is also bullish on the U.S. residential construction market for 2021, but the constantly evolving coronavirus pandemic makes it hard to be certain.

“I think single-family (construction) is going to continue to do well,” Nanayakkara-Skillington said. “It might be slower than 2020, because 2020 was an incredible year.”

Nanayakkara-Skillington attributed the strong residential market to couples deciding to spend money on a house that might have otherwise gone toward a large wedding, reception or honeymoon.

Plus, older millennials are starting to enter their peak career earning years and quarantine increased their interest in bigger homes with offices and workout areas.

And rock-bottom mortgage interest rates make home ownership cheaper than ever, she pointed out. The interest rate on conventional 30-year fixed-rate mortgages fell to under 3% during 2020, substantially increasing the average potential homeowner’s buying power.

Virus Is ‘Wild Card’
However, Nanayakkara-Skillington and Branch both acknowledge that their predictions assume that the U.S. gets coronavirus under control through widespread vaccination before fall. If that doesn’t happen, it would change their outlooks.

“The vaccine is a big wild card for us,” Nanayakka-ra-Skillington said. “We do expect at least 50% of the population to be vaccinated by the end of summer, and at least 70% by the end of fall. Everything depends on that.”

The COVID-19 variants from countries such as the U.K. and South Africa now circulating in the U.S. are concerning, she said. If existing vaccines don’t work well against them, it could delay the expected return to a largely normal life by the end of the year.

A Different Prediction
One analyst who doesn’t have quite as rosy an outlook for 2021 is Jay Bowman, the managing director of research and analytics at FMI Corp.

Bowman said FMI is forecasting that residential construction will decline 5%.

“That’s probably different from what most economists are saying,” Bowman acknowledged.

FMI’s analysis notes that while many metro areas are doing well, a handful were particularly hard hit by the pandemic and recovery for them will take much longer.

But Bowman said SMACNA members shouldn’t get too worried over the predicted drop, which he said is small enough “to almost be a rounding error.”

“Even if we’re only talking about a 5% decline in activity, this is a massive market,” he said. 2021 will still be the third-highest year for single-family home construction in the last decade.