If you have any computer equipment in your shop, home or office — and nowadays, who doesn’t — odds are good that it was made by a company with its roots, or at least a major presence, in Silicon Valley. 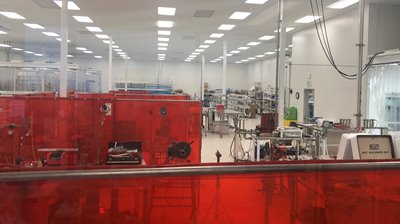 If you have any computer equipment in your shop, home or office — and nowadays, who doesn’t — odds are good that it was made by a company with its roots, or at least a major presence, in Silicon Valley.

The 50 year-old nickname “Silicon Valley,” used for communities around the San Francisco Bay area, comes from the numerous computer and software manufacturers based there. Starting with Stanford University students Bill Hewlett and David Packard in 1938, the region quickly gained a reputation as a hub for technology development. From transistor manufacturers in the 1950s to the makers of computer chips and software developers in later decades, the area is home to some of the best-known computer and internet companies in the world, including Apple, Google, Intel and Cisco.

When it comes to designing and installing clean rooms for their manufacturing operations, many of those top technology companies have called on the expertise of SMACNA member Therma, a full-service mechanical contractor based in San Jose, Calif.

Therma has been working with the region’s computer manufacturers since before the nickname Silicon Valley was in common use.

Clark Lowe, a principal engineer with Therma, has been involved in duct fabrication for several clean room projects for computer industry clients.

“Most of the big clean rooms we do are all silicon chip (manufacturing),” Lowe said. “Either R&D for the people making the machines or (a company) that’s making the hard drives and flash drives that you use in your computer.”

Ensuring that the spaces where these devices are put together are free of dust, dirt and any contamination is critically important, Clark said. Employees typically wear special suits, boots and gloves to ensure that they don’t bring anything into the sterile spaces where they work.

“A speck of dust or anything can really damage the chips,” he said. “They’re getting more specific about specific chemicals and particulates in the air in the clean rooms, because they’re getting the architecture of the chips so fine that the spacing between the different lines on the chips are nanometers apart. So anything can kind of bridge that and destroy that chip.”

To meet clients’ stringent requirements, Therma built a fabrication clean room for duct and piping that will be installed in customer facilities. Sheet metal workers in there wear special clothing to minimize the chances of contamination.

“You’ve got to produce it clean, because it’s hard to keep it clean after the fact,” Lowe said. “So when we make the duct we’ll clean it (and) seal the ends of our ductwork.”

And making sure those chemicals and particulates stay out once the duct is installed means that Lowe and the rest of the team at Therma have to design HVAC systems that can filter out particles far smaller than anyone could see with a naked eye.

“With clean rooms, one of the ways they make it ‘clean’ is they minimize how much outside air comes in and recirculate it all and purify it, because you can keep everything inside without off gassing certain particulates in the air,” he said.