Accurate Specialty Metal Fabricators (ASMF) of Queens, N.Y., took their work to another level recently with a project atop the Citigroup headquarters building in New York City. 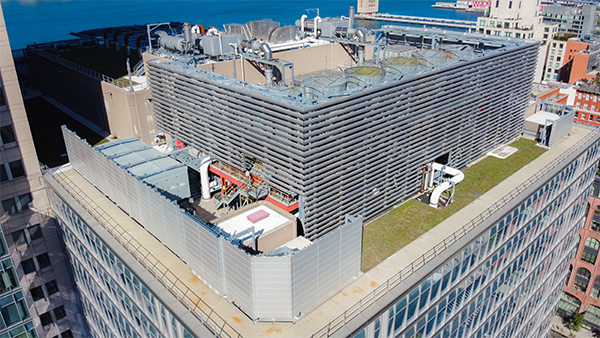 Accurate Specialty Metal Fabricators (ASMF) of Queens, N.Y., took their work to another level recently with a project atop the Citigroup headquarters building in New York City. They constructed and installed aluminum guardrails around the perimeter of the roof, along with a site screen wall to conceal the cooling towers.
When the multi-million-dollar project landed on his desk, ASMF’s COO, Rich Minieri Jr., saw a “fantastic opportunity to take a shot and manifest our vision for the future of ASMF’s business.”

ASMF produced and installed more than 3,000 feet of railings, though the biggest portion of the project was the cooling tower screens. The original plan was to extrude the site screen pieces, but the large size of the fins made that impossible. ASMF ultimately connected with a die manufacturer in Chicago and bought two sets of dies. The manufacturer flew to New York and spent two days working with the team to help get production running smoothly. 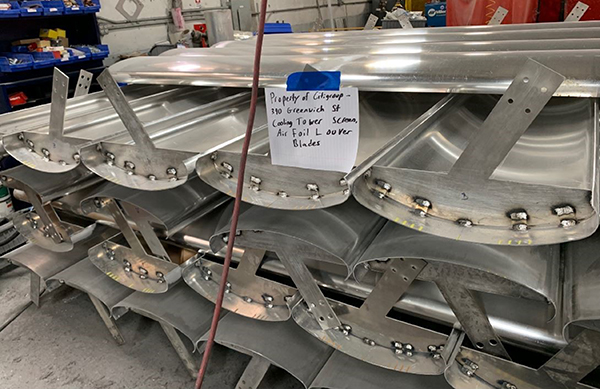 A bird’s eye view of the cooling tower.

Minieri says planning and organization were crucial. “Once we got the fabrication underway, the next focus was logistics. How do we want to go about it? How do we want to install this?” To simulate installation, ASMF stacked up containers to create a 50-foot high wall at their facility, assembled 15 blades on the ground, and then erected them. It worked well, so they decided to assemble everything in their yard, and crate the pieces for delivery to the job site and then they would install.

The team was comfortable and familiar with the materials they used on the project, which led to a cleaner fabrication process. The support brackets were one-quarter inch thick steel, the blades were one-eighth inch thick aluminum, and the subframe was an 8 x 3 by 3/16 tube steel. There were two support brackets per fin. Each section had three frames, totaling 50 feet in height.

While fabrication was underway at the facility, the team went to the top of the Citigroup building to measure out the landing area. It was just seven feet, and the crates were 6’ 6”. They built a 6’ 6” frame and walked it around the roof to ensure they could navigate every turn. 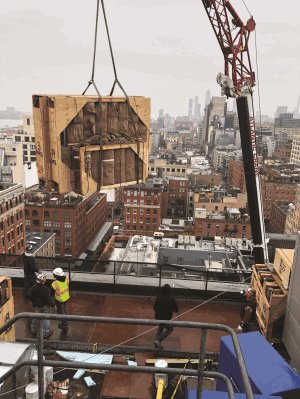 Fabrication started late in the summer, and installation began after Thanksgiving. It took nine trips with a flatbed to deliver the 27 crates — each 13’ high and 6’6” wide.

“You’re on the west side of New York City, Hudson River, wind blowing, Greenwich Street, tons of people on the ground. And you’ve got a 3000-pound crate that’s pretty top heavy being wheeled across the roof. Fortunately, we were able to successfully land it. And then, as we started setting the crates and working from the south to the east to the north, the travel distance shrunk, which led to a quicker set time,” Minieri said as he described the scene at the sky-high job site.

Citigroup’s headquarters are 59 stories tall, or about 915 ft high. Knowing the risk of the wind catching hold of materials, they tied each crate down to the building to ensure there was no movement, and five people focused on uncrating.

Another challenge was the lack of space. The first few crates went slowly but installation started picking up because space was opening up, and they got into a really good rhythm. “We had to be done by Christmas Eve,” said Minieri. “We call it the ‘Christmas Miracle‘ because it was a tall task. But I have a great group of team members and colleagues. No matter how difficult the task was, everybody always had the mindset of addressing the problem, overcoming it, and forging forward. We were really proud of the product we presented and the way in which we accomplished it.” 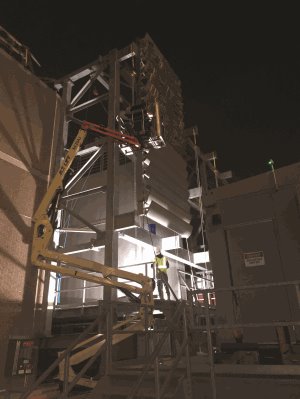 A night shot of the first section being installed.

Minieri credits the general contractor, Tishman Construction, and Citigroup, the client, for being so accommodating throughout the project. “It was always an open line of communication. It was ‘How can we fix this?’ and ‘How can we improve on this?’ And when you’re building major buildings in New York City, that’s the type of mindset and mentality you need. It’s a team effort and it’s better to be all rowing in the same direction than against each other.”