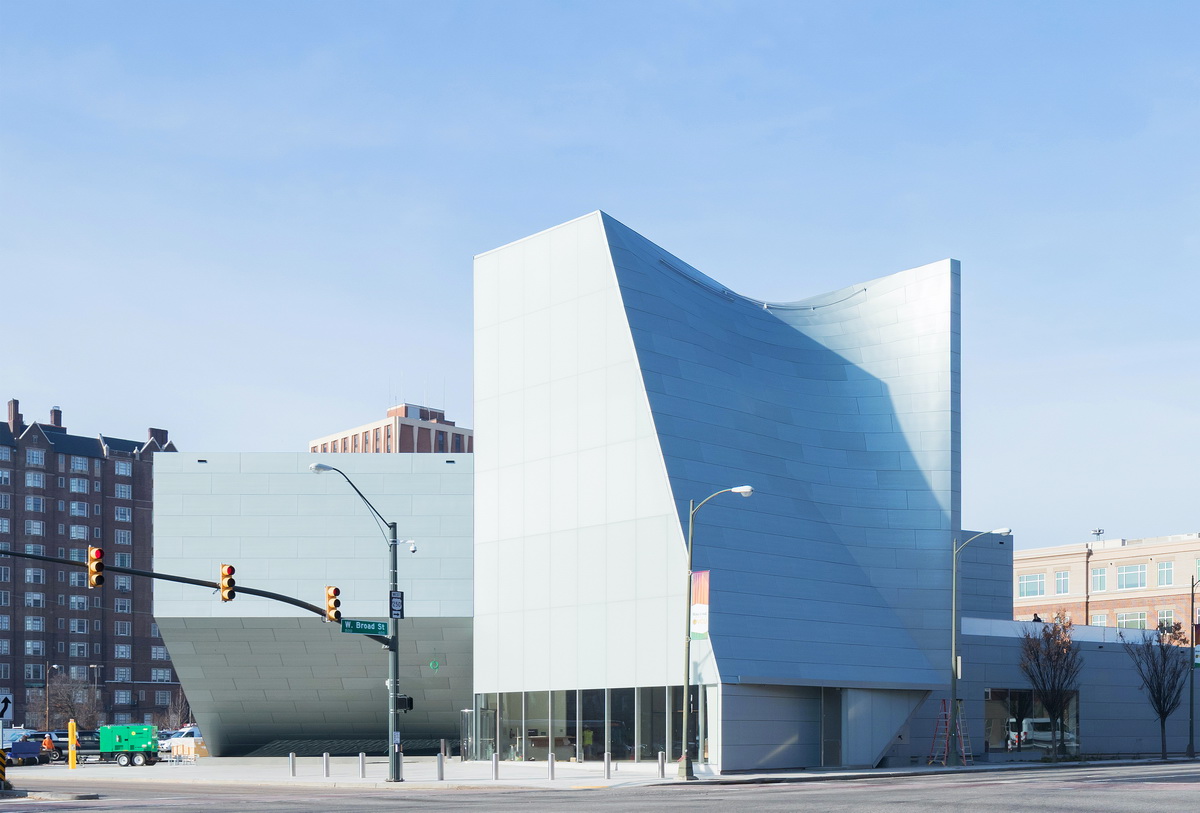 L. William Zahner clears up some of the common misconceptions about architectural metals in five-volume book series. Stainless steel will never corrode or rust. Aluminum is too expensive for many applications. And zinc is quick to deteriorate. L. William “Bill” Zahner III said those beliefs are common among architects and designers in the architectural metals industry. They’re also wrong. 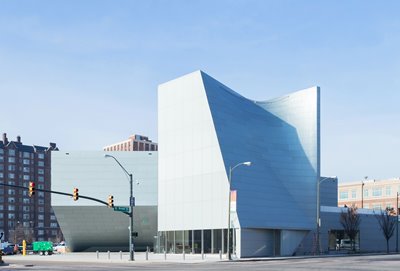 “There’s a lot of, shall we say, ‘misinformation’ that gets out there,” he said.

Zahner would know. The president and CEO of A. Zahner Co. has written numerous articles and several books about the use of metal in architecture. He has appeared at SMACNA events many times to discuss the topic. His company, the 125-year-old Kansas City, Mo.-based A. Zahner Co., has done the design, fabrication and installation for some of the most well-known and iconic metal structures around the world — from international corporate headquarters to museums that draw millions of visitors annually.

The company’s employees are experts at making metalwork for high-profile construction projects, whether it’s fabricating gleaming stainless steel pillars or deep brown copper cladding. And since they have extensive experience not just with metal design but also its fabrication, Zahner and other company employees often act as consultants on metal projects worldwide.

Bill Zahner has written seven books on architectural metals. The latest series of five books covers stainless steel, aluminum, zinc, steel and copper alloys. Zahner picked those metals, he said, because they’re the ones most commonly used in architectural projects. Each volume goes into extensive detail on the applications for using the material.

The most recent book in the series, Zinc Surfaces: A Guide to Alloys, Finishes, Fabrication and Maintenance in Architecture and Art, was just published by Wiley. 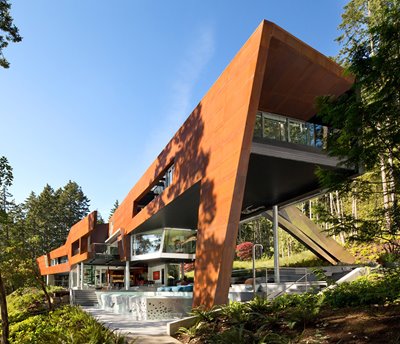 Instead of letting nature slowly transform the steel’s appearance over time, pre-weathering steel in a controlled process allows it to quickly develop an oxidized appearance. All pictures courtesy of A. Zahner Co.

It’s information that needs to get out to the broader architectural and design community, Zahner said.

“The point of (the series) was to educate designers and artists of the various idiosyncrasies between one metal versus the other and how they can be used in design and fabrication successfully,” he said. “All the books delve into the actual surface of the material, how they’re weathered, how they’re going to respond to the environment, and how you can alter them to create various patinas or custom reflectivity from the surface.”

Echoing some of the information that he covers in greater detail in the book series, Zahner discussed with SMACNews some of the most popular architectural metals in use today, their advantages, and some of the misconceptions architects and designers have about them.

“We use them all,” he said. “What I try to do is shed some light and give real world (examples) and some scientific approaches on why certain things happen.”

Stainless Steel
Zahner has been involved in many noteworthy architectural projects that use this material, including the Petersen Automotive Museum in Los Angeles, which features numerous stainless steel ribbons on its exterior.

“We’re seeing stainless steel being used more and more (because) it’s strong,” he said. “It doesn’t change or change is extremely slow. You can add color to it using an interference coloring technique, which is chromium oxide layers on the surface, or you can use physical vapor deposition, which is a very thin molecular coating of say, titanium carbide or titanium nitride on the stainless steel to give it those colored tones.”

“The biggest trend is using finishes that diffuse the light,” Zahner said, “like a finish that we developed over the years called ‘angel hair’ that has become very popular with architects because of the way diffuse light reflects from the surface. It’s as if light is being generated from the metal itself.” The Petersen Automotive Museum used this type of material.

Despite its popularity, some architects and designers do not fully understand how stainless steel is impacted by environmental factors, Zahner added. “People think stainless steel will never corrode and never rust, but there are certain conditions where it does,” he said. “The prolific use of deicing salts in our cities can damage the surface of stainless steels.”

Aluminum
Aluminum is another architectural material where misconceptions are common, Zahner said. For example, corrosion is not as common as many designers think, nor is it a particularly expensive material choice. SoFi Stadium in Inglewood Calif., home to the L.A. Rams and L.A. Chargers, has 789 perforated, custom white anodized aluminum exterior panels that were manufactured by A. Zahner.

“I think it’s probably more economical per pound per surface area,” he said. “There are certain conditions where aluminum is more optimal than stainless. Aluminum takes very small amounts of other elements to change the characteristics considerably. All aluminum we see in use today are alloys of aluminum and trace amounts of other metals. Certain trace elements added to aluminum can strengthen to levels reached by mild steels.”

Despite some misconceptions among designers, aluminum is growing in popularity, he said.

“I think you’re going to see an explosion of the use of aluminum based on some of the new techniques and new dyes that they’re impregnating the surface with,” Zahner said.

Among A. Zahner’s recent architectural aluminum projects was SoFi Stadium in Inglewood Calif., home to the L.A. Rams and L.A. Chargers. The building has 34,789 perforated, custom white anodized aluminum exterior panels that were manufactured by A. Zahner. “It’s an absolutely stunning, beautiful structure,” Zahner said. “That’s probably the biggest architectural piece of aluminum in the U.S.”

Zinc
While popular, zinc is another often-misunderstood metal, Zahner said.

“There’s two rules of thought when you look at zinc and commercially pure zinc: People think it’s going to corrode and corrode rapidly. Actually, it performs better on the sea coasts than other metals,” he said. “We’ve done some homes in the Bahamas using zinc surfaces. … We’re finding zinc to be one of the more remarkable (materials) for putting patina on a surface. Zinc takes on different characteristics than other metals that are commonly used by sheet metal fabricators. Zinc won’t harden when it’s formed, like say stainless steel would,” he explained.

The offices inside A. Zahner’s 17,000-square-foot headquarters expansion, which was completed in 2018, features a thin skin of zinc panels.

Another major zinc project that involved A. Zahner is the Institute for Contemporary Art at Virginia Commonwealth University. The company provided 1,360 Rheinzink custom-patinated zinc panels and 135 coping panels. “It’s a beautiful use of zinc,” Zahner said.

Copper
Copper has been a popular architectural building material for thousands of years. The Statue of Liberty in New York Harbor is just one-high profile example of its use. While many architects love using copper for its beauty and durability, Zahner said, not all of them like what he compares to an awkward adolescence as the material matures. 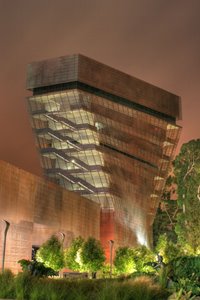 The de Young Museum included nearly 8,000 unique facade panels which allows the collective whole form patterns of light as seen through trees. This was the first iteration of the Zahner Interpretive Relational Algorithmic Process, or the ZIRA Process.

That was a concern for the owners of the deYoung Museum in San Francisco’s Golden Gate Park. The building, which uses almost 130,000 square feet of copper panels, would not reach its final, earthy green color for more than a decade after its 2005 construction. That was not what they wanted to hear, he said

The client even flew to Kansas City to look at mock-ups set up on site. “He says, ‘Look Bill, I want this thing to look like a polished penny or the green like on the Statue of Liberty. I don’t like those intermediate times’ or as he called them, ‘those teenage years with pimples and everything,’” Zahner explained. “And I told him, with this metal, if you allow it to grow like your teenager and you take care of it and you allow it to have its pimples, that eventually it’s going to be a beautiful surface. And that’s what happened.”

Weathering Steel
This popular material was once found under the brand name Cor-Ten, originally trademarked by U.S. Steel. Instead of letting nature slowly transform the steel’s appearance over time, pre-weathering steel in a controlled process will quickly develop an oxidized appearance. The surface achieved is identical and as beautiful as the one nature produces. Additionally, this steel has excellent corrosion resistance and very high strength.

That makes weathering steel popular with many designers and architects. “It seems like most projects today, they want to accelerate the weathering to the point where it’s more stable,” Zahner said. “People want to know how it will change. They want to be able to predict it. We pre-weather it almost exclusively rather than allowing it to weather naturally.”

From Aluminum to Zinc, L. William Zahner Has Written a Book About It

L. William “Bill” Zahner has authored seven books, including a five-volume series about architectural metals.
The books are often referenced by architecture students and metal fabrication professionals looking for a deeper understanding of the materials they design for and work with every day.

Published by Wiley, all are available at Amazon.com, Wiley.com and other booksellers.