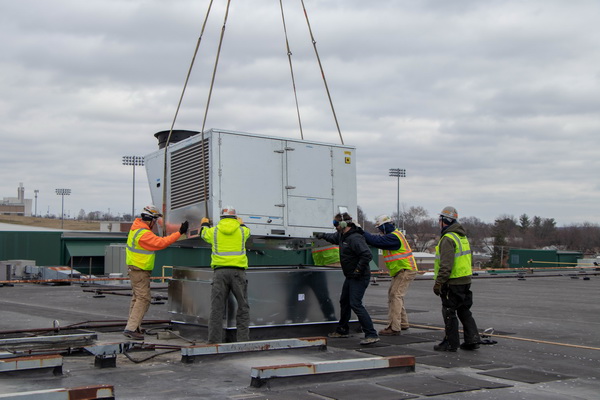 IFS is currently working with construction management and energy performance company Navitas on the Pattonville High School. Navitas audited the schools’ energy use to develop energy conservation improvements – from HVAC upgrades to building performance optimization. The improvements are expected to reduce energy consumption by one-third. 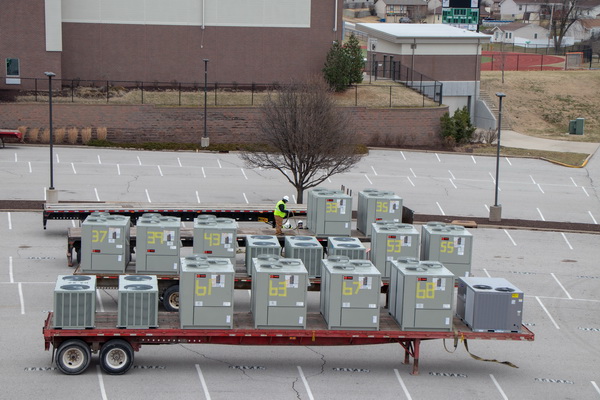 Units in staging area waiting for a lift.

One of the most dramatic aspects of the installation involved airlifting rooftop units up to the school roof. At 417,917 square feet, Pattonville High School is the largest high school in the state of Missouri, but the campus didn’t have enough space to lift the equipment by conventional crane. IFS partnered with Midwest Helicopter Airways to get the job done.

Then, on a clear day during the school’s winter break, the IFS, Navitas, and helicopter team airlifted 70 tons of HVAC equipment to the high school roof by air crane.

“To control costs, we minimized the number of empty trips the helicopter would take. It took about a week to plan the two and a half hour lift.” The helicopter removed 32 existing, hard-to-reach HVAC units and lifted 38 new condensing units and cooling coils, makeup air units and rooftop units. Sixteen IFS employees assisted on-site. It took 70 trips. 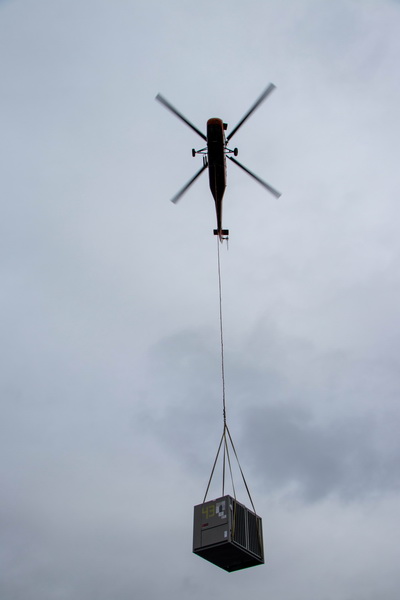 Airlifting equipment up to the roof.

Inside the building, replacing the boilers also was essential for cutting the school’s operating costs. For example, the old system used a heat exchanger on the main boiler system to heat the domestic water. “Even in warm weather, the school had to run the boilers for water for showers and handwashing,” Edwards explained. “When they tried to cool the building in the summer, the hot boilers drove up costs.”

IFS separated the domestic water from the HVAC system by rearranging piping in the boiler room. “Now the boilers are dedicated to the heating system and the school has water heaters that meet their needs more economically,” he said.

IFS finished most of the work at Pattonville High School during the school months. To avoid disrupting classes and events for the high school’s 1,700 students, IFS performed most of the upgrade in the afternoons and evenings. “We started at 3 p.m. and worked until 10 p.m. or 11 p.m. at night,” he said. “Sometimes we worked weekends.”

And they kept their work areas immaculate. “The building occupants didn’t know where we had been, because we cleaned up every night before went home,” Edwards noted. “We even replaced ceiling tiles back before we left.”

The HVAC project is scheduled to be complete in August before the start of the school year.