The Washington State Convention Center (WSCC), the premier meetings and events facility in the Northwest, is doubling in size with its new Summit building in downtown Seattle. 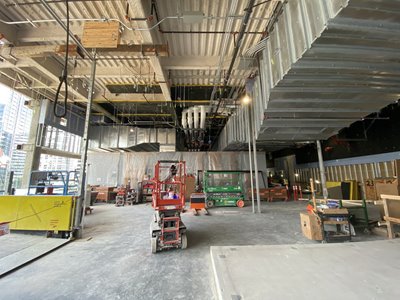 The Washington State Convention Center (WSCC), the premier meetings and events facility in the Northwest, is doubling in size with its new Summit building in downtown Seattle. The Summit addition, which is scheduled to open in mid-2022, will add 1.25 million square feet of convention space and 250,000 square feet of parking and retail in an innovative program including stacked exhibit halls, two stacked meeting room levels, and an industry-leading 60,000 square foot ballroom. The final funding to complete the Summit building project was secured in April of this year.

WSCC was particularly selective in awarding the HVAC contract for this expansion, which involves a 4,000-ton central utility plant and 1.3 million pounds of ductwork. “MacDonald-Miller had to submit pre-qualifications and go through our financials to even reach the interview process,” said MacDonald-Miller’s Operations Manager Rylan MacCay. “We had to demonstrate that we could take on a project of this size, especially with the scale of the ductwork.”

WSCC also evaluated the planning team. During pre-construction, detailers from MacDonald-Miller co-located at the Arup Engineering office to model the systems in 3D and speed up the coordination process. 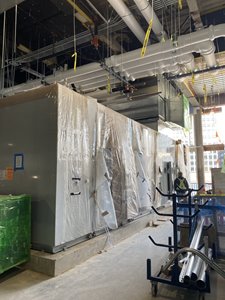 AHU-604. The outside air ductwork goes up and over the supply as it goes to the exterior of the building.

“Everyone — engineers, detailers, project managers — would get together in a room and hash out those items, which allowed us to identify issues that would have been very serious later in the game had we not talked about them,” says Project Manager Jon Osman. “For instance, the early design had single coil air handlers. Our detailers saw that we needed dual coil air handlers, which required major changes in piping and connection.” Rigorous constructability reviews allowed MacDonald-Miller to manage adjustments before the AHUs had been procured or installed.

The Summit includes 35 dual coil air handlers in multiple mechanical rooms. The biggest AHUs are 15 feet tall and 45 feet long by 15 feet wide and weigh around 50,000 pounds each. “They’re huge. We’ve been looking at the drawings for two years, but it’s not in perspective until you see one in person.”

The main smoke exhaust unit for the Level B2 Exhibition Hall and the Level 5 Flex Hall. This supply ductwork will be able to reverse and become exhaust in the case of a smoke event.

The entire project is on the same massive scale. “We have spiral duct that goes up to 78 inches, and there’s an 82-inch run as well,” says MacCay. The ductwork is up to 20 feet wide, and one single fitting will be 20 feet by 30 feet. “That fitting is built to a pressure class of 10 inches,” Osman says. “I feel like you could run water through it.”

MacDonald-Miller subcontracted some of the spiral but is fabricating the rest of the duct in-house. “We have 60 to 80 sheet metal workers in our fabrication shop,” says MacCay. “For most of last year they’ve been working three shifts, so the shop runs around the clock, five days a week.” Besides the team in the shop, they expect to have 60 sheet metal workers on site next month. 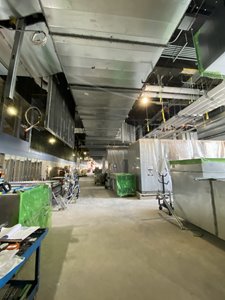 “Most jobs I’ve encountered start on the ground and move up, so one of the biggest challenges of this site is that it’s built on a billboarding system,” Osman says. The unique plan organizes the construction into five towers or ‘billboards’ in a row, to brace one other and support the load. Area One went up first, then Area Two and so on. Area Five has reached the seventh of fourteen levels.

“At one point the building looked like a giant staircase of steel,” says Osman. “It takes significant coordination to manage these different billboards while also moving up the building. Since the systems are not complete horizontally, we’ll cap systems off in order to start the TAB process soon. Due to the schedule, we simply can’t wait for the end of the job,” he said

Another aspect unique to the project is that the scaffolding is not as permanent as it may be on other sites. It sits in place for a day or two to load materials, then it’s moved to a different location for walls to proceed.
“This is definitely the biggest job I’ve ever been on,” Osman. “It might be the biggest of my career. I have never done anything like this before.”