ARCHITECTURAL: The Project of a Lifetime 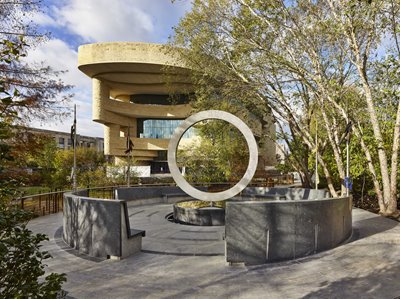 On Veteran’s Day 2022 (Nov. 11), hundreds of Native American veterans gathered in Washington, D.C., for the dedication of the National Native American Veterans Memorial, designed to honor Native American veterans. Among those gathered was Tammy Adams, co-owner of RedLand Sheet Metal (with her husband, Henry). A citizen of the Choctaw Nation, Adams was proud to be a part of the day not only because of her heritage but because her Oklahoma City-based company had the privilege of being part of the fabrication

“Warriors’ Circle of Honor” was designed by artist Harvey Pratt, a Cheyenne and Arapaho tribal citizen. It provides an opportunity for reflection, which is incredibly important as Native Americans serve at five times the national average in the United States Armed Forces. Tammy Adams says that is because most Tribes have a “Warrior Society,” so serving in the military is ingrained in the culture.

When it came time to find a fabricator, 1902, a sheet metal fabricator, was initially awarded this project. However, realizing they needed a partner that specialized in stainless steel fabrication, the company enlisted RedLand to help. Henry Adams says that when Jim Brown, project manager with 1902, approached him and Tammy, there was instant interest.

It quickly became a “passion project” for the company, says Tammy Adams.

The fabrication of the 12-foot stainless steel hoop ultimately took around 2,500-man-hours with both companies’ involvement. The owners were incredibly hands-on, says Brown, with it being such a “high-profile” project. Brown also brought in an engineer to assist with drawings and structural calculations to ensure everything was perfect.

Everyone knew that the finished project would have thousands — eventually even millions — of eyes on it.

Butzer Architects was also very involved — and the Smithsonian folks were out a few times to check-in. The importance of this project required quite a bit of collaboration. Though the two companies say they have certainly worked on projects that are larger in physical size, nothing has been larger in terms of meaning and purpose.

The hoop required 4,000 pounds of stainless steel, the procurement of which was a challenge with fabrication occurring during the pandemic.

Once welding was underway, Henry Adams says the tolerances were very tight.

“The radiuses on the outside corners were very tight tolerances — all within plus or minus .0625 of an inch,” he says. “A lot went into making that happen, and then came the polishing. But we were all very happy with the end result. There is a water feature below the surface of the stone. There are also four lances and a burner section that goes into the hoop so they can turn on the fire when they desire.”

While there is an intended simplicity to the look of the finished project, there is a lot more to it than meets the eye, continues Adams.

Lamar Lester, fabricator and shop foreman at RedLand Sheet Metal, calls the project a “once-in-a-lifetime experience.” He says he has never been involved with something quite as meaningful.

“I think knowing that this Memorial would be on display in such a prominent location — and knowing what it represents — led to a lot of internal pressure,” Lester admits. “It was too large to move or turn over, so we had to weld in position, which was a logistical challenge. But, in the end, leaning on the ownership and leadership of the two companies involved in this helped us to get it right.”

During the November dedication, Tammy says that the culmination of the hard work, and what the Memorial stood for was incredibly moving. Tucked back amongst some trees on the National Mall, the Warriors’ Circle of Honor is a place for meditation and remembrance.